Three Kurdish citizens, Kamal Bayani Rad, Khosrow Tarek, and Sattar Arghandeh were executed in Ilam Central Prison at dawn on Wednesday, June 8. According to a local source, Sattar Arghandeh, 44, was arrested 18 years ago on charges of murder. Sattar was released and re-arrested two years ago. He was married and had two children. He never confessed to the murder and there was no evidence supporting the conviction. He was sentenced to death only on the basis of the Judge’s decision.

Khosrow Tarek, 45, was a resident of Ilam. He was arrested and sentenced to death seven years ago on charges of murder.

Kamal Bayani Rad from Ilam was arrested 5 years ago on charges of murder and was sentenced to death by the regime’s Judiciary. The execution of the three Kurdish citizens in Ilam Central Prison has not yet been announced by the media or official sources.

According to local sources, the execution of two political prisoners in Ahvaz Sepidar Prison triggered public support for them that was put on display during the burial of their bodies in the Ahvaz cemetery. While security forces violently tried to prevent the ceremony, they were met with a public reaction and failed to end the ceremony.

Majid Amouri was executed along with Qadir Naseri, another political prisoner, on the morning of Tuesday, June 7.

The people present at the ceremony expressed their sympathy for the family of this political prisoner by chanting slogans against the clerical regime.

Locals say Majid Amouri clashed with the regime’s repressive forces in 2018, protesting the arrest of his older brother Rasoul Amouri. He was sentenced to death by the court in Ahvaz on charges of armed confrontation with officers in his brother’s car and the killing of an officer of the repressive police force named “Navid Haghighat Shenas”. 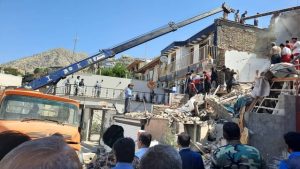 This morning, an explosion in a residential house in the border town of Nowsud, Kermanshah province, led to the collapse of several homes and left 2 people dead. Ardeshir Rostami, the governor of Paveh city said that two members of a family who were a mother and her child died.

According to the state-run Fars news agency, the governor of Paveh County confirmed the destruction of a three-story building in the city of Nowsud and mentioned a gas leak in the house as the reason. He told reporters: “In less than an hour, we evacuated six people, but unfortunately two of them died and the rest were taken to hospital.”

Mojtaba Khaledi, spokesman for the Emergency Organization said: “The accident was reported to the Kermanshah Crisis Operations Center at 8:54 AM. It is a four-story building. The cause of the collapse is still unknown. I have to say that four of the injured are unfortunately in critical condition and have been transferred to hospitals in Paveh. It is possible that they may be transferred to Kermanshah City due to the need for special treatment.”

The state TV quoted the regime’s Red Crescent organization that two of the adjacent buildings have also collapsed.

Third Day of Anti-regime Protests by Iranian Pensioners and Retirees 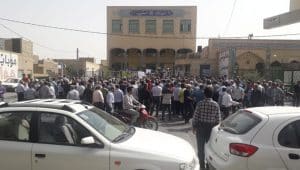 Retirees and pensioners of the Social Security Organization rallied in several cities on Wednesday, June 8, for the third consecutive day, protesting low wages and pensions, insurance issues, and poor living conditions. Demonstrations were reported in Arak, Tehran, Kermanshah, Karaj, Yazd, and Ahvaz among others. The protests, which occur regularly, are happening as Iran has seen two waves of intense anti-regime protests in the past month, caused by declining economic conditions, growing inflation, and skyrocketing prices of basic goods. 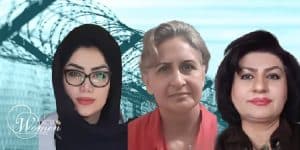 The Revolutionary Court of Tehran has sentenced 4 Christian women to spend 17 years in prison. The 17-year sentence was issued and handed down to the 4 Christian women on June 7, 2022. The 4 Christian women are Somayyeh (Sonia) Sadegh, Massoumeh Qassemi, Mina Khajouy-e Qomi, and Maliheh Nazari. The court has also deprived them of their social rights, including the right to leave the country. Eskandar Lotfi, a member of the Managing Board of the Marivan Teachers’ Association, detained by the Intelligence Agency in Sanandaj, western Iran, has been on a hunger strike since May 30. His hunger strike is in response to authorities renewing his detention order and being pressured to make false confessions. Security forces detained Eskandar Lotfi and Massoud Nikkhah, the other teacher who is on hunger strike, on May 1. Nikkhah was released on bail from Marivan Prison on May 11 and was detained again the next day.

June 8, 2022—Vienna, Austria: Freedom-loving Iranians, supporters of the People’s Mojahedin Organization of Iran (PMOI/MEK), demonstrated against the nuclear program of the mullahs’ regime.

Previous articleEconomic Woes Cause Protests, but Why Do Iran’s People Target Regime Officials?
Next articleMrs. Maryam Rajavi: For the Sake of International Peace and Security, Regional Stability, and Prevention of War