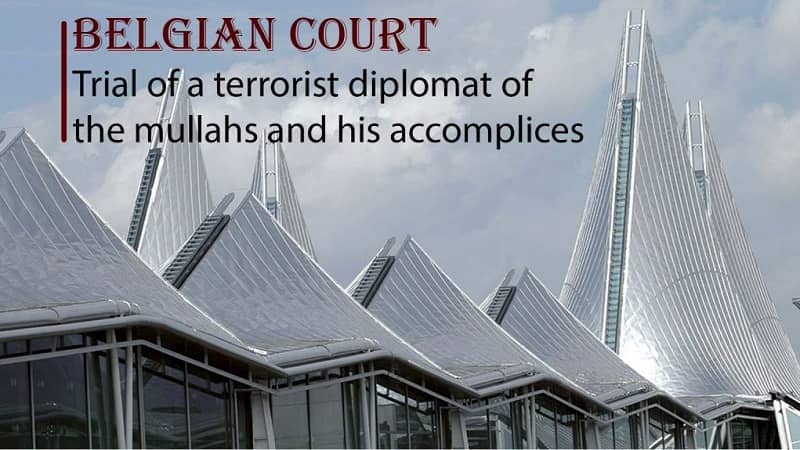 Day 2 of the terror trial in Antwerp – Maryam Rajavi: EU must designate IRGC and MOIS as terrorist entities

Maryam Rajavi, President-elect of the National Council of Resistance of Iran (NCRI), wrote in a twitter thread about the day 2 of Assadollah Assadi’s trial:

The world faces state terrorism sponsored by the Iranian regime. In addition to the persons who are being tried today, the mullahs’ supreme leader, president, intelligence minister and foreign minister must also face justice.

The regime’s embassies, cultural and religious centers which are used as centers for coordination of terrorism and espionage, must be shut down.

This case once again shows that as far as terrorism and its usage as a ruling tool is concerned, there is no difference between the regime’s various agencies, including between the Intelligence Ministry, Foreign Ministry, Khamenei’s office and Rouhani’s office.

Today, European countries whose soil has been used by the Iranian regime to carry out its terrorist operations face judgement of the public opinion. Will they end their passivity vs. Tehran’s terrorism, or will they adopt a decisive policy against his medieval regime?

The European Union must designate the mullahs’ IRGC and Ministry of Intelligence (MOIS) as terrorist entities.

Agents and mercenaries of the MOIS and Qods Force must be prosecuted, punished and expelled from Europe and their citizenship revoked. Granting them citizenship and political asylum these agents would only pave the way for further terrorism.

The world faces state #terrorism sponsored by the Iranian regime. In addition to the persons who are being tried today, the mullahs’ supreme leader, president, intelligence minister and foreign minister must also face justice. #ShutDownIranTerrorEmbassies 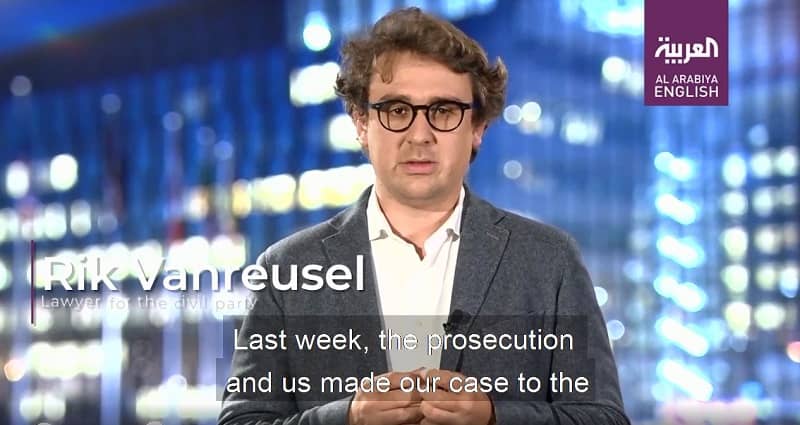 The lawyer representing the civil parties in the case against an Iranian diplomat on trial in Belgium for planning to bomb a meeting of an exiled opposition group in France in 2018 said he is confident a verdict would be reached by next month.

“I believe we truly obliterated every legal argument, which was proposed by the defense of Mr. (Assadolah) Assadi and the other three Iranian defendants,” Rik Vanreusel, a criminal law lawyer who is part of the legal team representing the civil parties, told Al Arabiya.

Struan Stevenson: Iran is a terrorist regime, EU must shut down Iran’s embassies

Struan Stevenson, Former MEP, mentioned in a tweet that Assadollah Assadi’s trial should serve as a warning to the West that Iran is a terrorist regime, whose embassies are used as bomb factories and terror cells. The EU must shut down Iran’s terror embassies and expel their diplomats. Re-double sanctions against this pariah regime.

Assadollah #Assadi trial should serve as a warning to the West that this #Iran is a terrorist regime, whose embassies are used as bomb factories and terror cells. EU must #ShutDownIranTerrorEmbassies & expel their diplomats. Re-double sanctions against this pariah regime.

Mohammad Mohaddessin, the Chairman of Foreign Affairs Committee of the National Council of Resistance of Iran (NCRI), wrote in a twitter thread about the day 2 of Assadollah Assadi’s trial:

Day 2 of Iran’s diplomat-terrorist and his accomplices on trial in Belgium. Two and a half years of the regime’s chantage and blackmailing failed to prevent this day. Past forty years show incentives to Tehran to render more terrorism and hostage-takings.

The corrupt chain of terrorism and taking innocent people hostage to swap them with terrorists, used by Iran’s regime for forty years, will only be broken by a firm stance. The prosecution of Assadi and his accomplices is a necessary measure.

This long overdue process needs to be completed with the prosecution of senior regime officials, and Iran’s Revolutionary Guards (IRGC) and Ministry of Intelligence & Security (MOIS) to be designated as terrorist organizations.

1—Day 2 of #Iran’s diplomat-terrorist & his accomplices on trial in Belgium. 2½ yrs of the regime's chantage/blackmailing failed to prevent this day. Past 40 yrs show incentives to Tehran render more terrorism/hostage-takings.
Correct path=firm policy#ShutDownIranTerrorEmbassies

The second session of the Belgium Court started today. In the first session, prosecutors asked for a 20-year sentence for the Iranian regime’s diplomat-terrorist Assadolah Assadi. The jail time requested for the three other terrorists were 18 years for Amir Saadouni and Nasimeh Naami, and 15 years for Mehrdad Arefani.

The prosecutors also requested the latter three to be stripped of their Belgian citizenships.
The most important target in this foiled bomb plot was NCRI President-elect Maryam Rajavi, and Saadouni and Naami were told to install the bomb as close as possible to her, the prosecutors emphasized.

All the collected evidence indicates Assadi commanded this bombing operation, the prosecutors highlighted.

Describing how Assadi was arrested in Germany, the prosecutors underscored he enjoys no diplomatic immunity.

The Iranian regime not permitting Assadi to attend the first session of this trial, cooperate, and answer questions indicates that Tehran is behind this terrorist operation.

Since Assadi was working with the regime’s Ministry of Intelligence and Security (MOIS), one cannot claim this operation was a one-man initiative and the entire regime was involved in this plot. 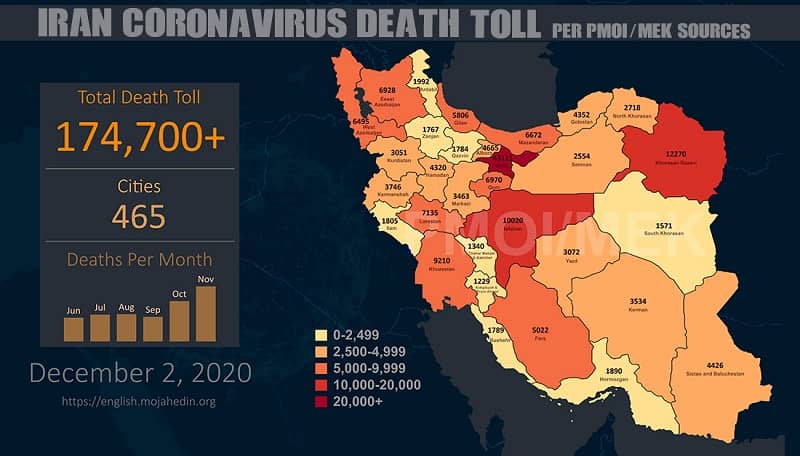 More than 174,700 people have died of the novel #coronavirus in 465 cities checkered across all of Iran's 31 provinces, according to the Iranian opposition PMOI/MEK. 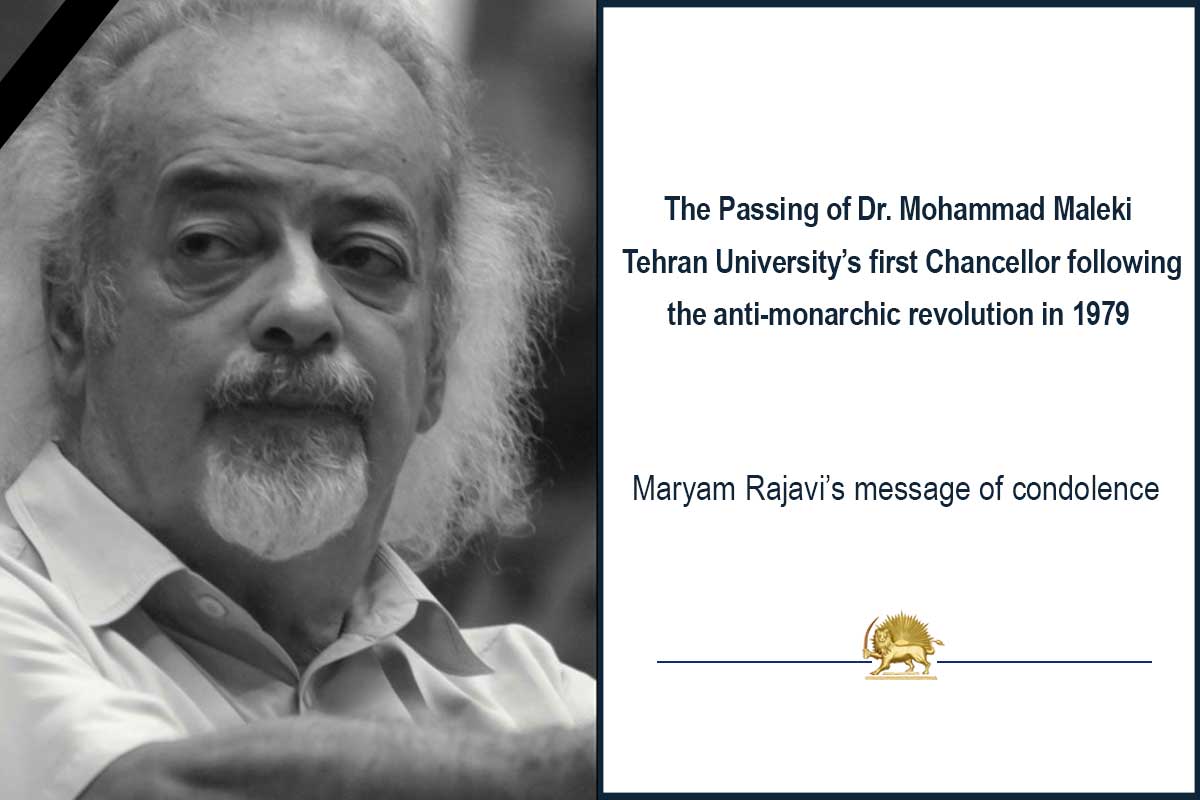 Maryam Rajavi’s message of condolence
I offer my condolences on the passing of Dr. Mohammad Maleki and condemn the Iranian regime’s tortures against him in prison and outside prison. I wish to reiterate that despite all the pressures and a debilitating illness, Dr. Maleki never surrendered and continued to expose the ruling theocracy – the mullahs’ anti-Islamic and anti-Iranian regime.

Remarks by Dr. Maleki during the burial of one of People’s Mojahedin mothers, Mehri Janatpour (mother Daei), in which he valiantly condemned the regime’s barbaric assaults on the PMOI in Camp Ashraf and supported their struggle, showed his courage in crossing the ruling regime’s first and most important redline. It was truly enduring and unforgettable.

The Iranian people will never forget the torture, mistreatment and inhuman conduct of the clerical regime vis-à-vis this great scholar.

I pray to God Almighty for His mercy on this great scholar. He is sure to join his martyred colleagues. May God bless his soul. 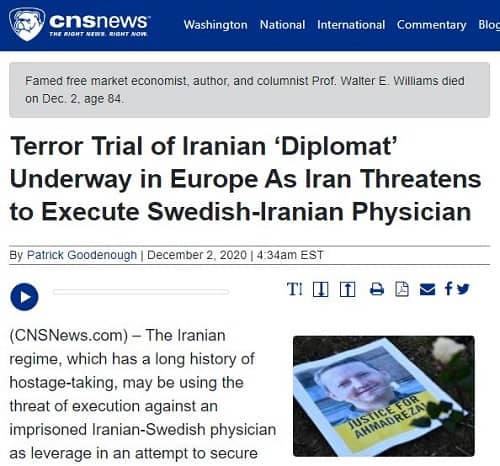 The Iranian regime, which has a long history of hostage-taking, may be using the threat of execution against an imprisoned Iranian-Swedish physician as leverage in an attempt to secure the release of an Iranian diplomat on trial in Belgium for alleged terrorism on European soil.

THE CONTENT OF THIS PAGE WILL BE UPDATED WITH THE LATEST NEWS UPDATE: 9:00 AM CET Online Conference - European Dignitaries Comment on Europe's Iran Policy,...
Read more
Iran News Now