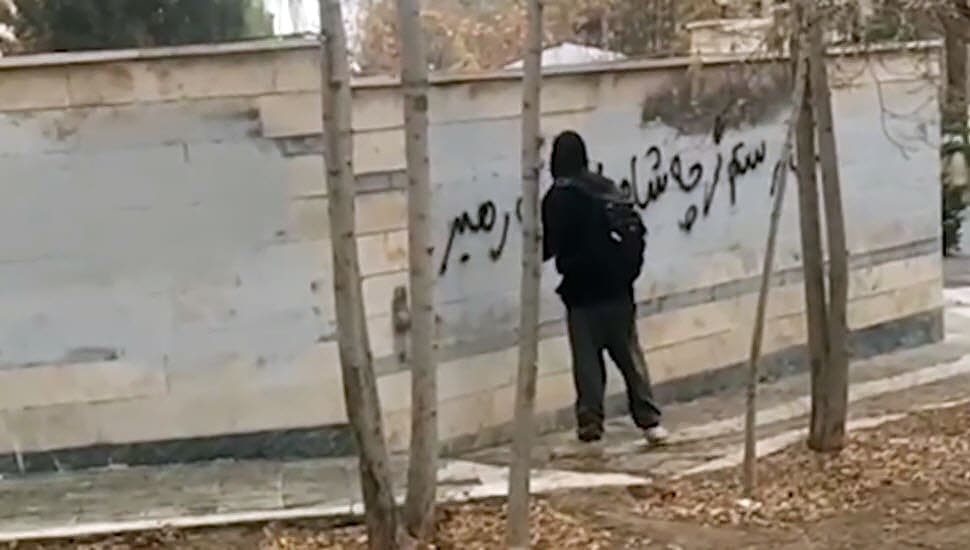 In partnership with senior IRGC-QF officials, Ayan’s network of companies facilitated shipments of Iranian oil to the People’s Republic of China and Russia.  For years, Ayan’s companies have established international sales contracts for Iranian oil with foreign purchasers, arranged shipments of oil, and helped launder the proceeds, obscuring the oil’s Iranian origin and the IRGC-QF’s interest in the sales.  These activities were a critical element of the IRGC-QF’s oil smuggling operations. 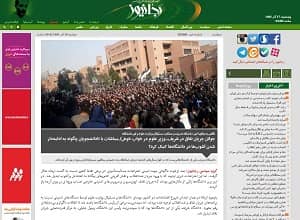 Today, in an article entitled “While the MEK flaunts in the Sharif University, the Minister is asleep”, the Rajanews website, affiliated with Saeed Jalili, a member of the regime’s Supreme Security Council warned about the Resistance’s network in one of the most prestigious colleges inside the country.

“In the last few years, the Sharif University has been one of the universities that the counter-revolution movement, especially the hypocrites (regime’s pejorative term to smear the MEK in Iran), have invested in. For instance, Ali Younesi and Amir Hossein Moradi were two students of Sharif University who were arrested by the agents of the Ministry of Information after the events of November 2019. These two students were in communication with the MEK and were supposed to build a network and carry out some terrorist activities for this organization,” Rajanews wrote. “Once disturbances and riots developed, some universities in the country also witnessed peaceful protests. The Sharif University of Technology was also one of the universities that became inflamed and experienced protest rallies. But some protesting students radicalized the atmosphere in this university.”

Calling for the additional brutal crackdown on students, the website added: “Destruction of university property, brutal attacks on Basiji students, threatening professors and students to close classes were among other actions of these so-called students. It is obvious that with the continuation of the appeasement approach, the MEK will continue to flaunt Sharif University and ridicule the dignity of students, the university, and the institution of science.”

PARIS, Dec 8 (Reuters) – The European Union is set to agree new sanctions targeting Iran over human rights abuses in its crackdown on protesters in the country and the supply of drones to Russia, France’s foreign ministry spokesperson said on Thursday.

Speaking to reporters, Anne-Claire Legendre said foreign ministers would discuss new designations on individuals and entities involved in the crackdown and entities exporting drones to Russia.

Iran Uprising at a Glance – Day 84

The regime in Iran executed the first detained protester on Thursday, 22-year-old Mohsen Shekari, who was convicted of injuring a security guard with a knife and closing off a street in the capital Tehran, the first such death penalty carried out by the regime’s so-called Judiciary. He was charged with Moharebeh (waging war against God). The regime’s Mizan news agency reported the execution.

Reactions to the inhuman execution for a non-homicide alleged offense were fast and furious. Protesters chanted, “For every person who is killed, a thousand will rise up” and numerous social media posts suggest that people are looking ways to respond on the streets.

“We told you not to execute, you did not listen. Now we say we will take revenge,” protesters wrote as they vowed revenge for Shekari and all those innocently executed or killed on the streets.

Already tonight, protesters in Neka, Mazandaran Province, set ablaze the regime’s public prosecutor’s office. Protesters are also gathering in various cities, including in the Sattarkhan district of Tehran, and shouting “Death to Khamenei”. Shekari was arrested in this district.

December 8 – Tehran, #Iran
Sattarkhan district
Protesters chanting:
"Death to the child-killing regime!"
"Death to the dictator!"
"I will kill those who killed my brother!"#IranRevolution2022#مرگ_بر_ستمگر_چه_شاه_باشه_چه_رهبر pic.twitter.com/SVPCSqcckA

Dozens of detained protesters face charges or have been convicted of charges that carry the death penalty according to the regime’s so-called justice system. Activists are warning that others could also be put to death as at least a dozen people so far have received death sentences over their involvement in the demonstrations.

PRESS RELEASE – Horrifying execution of young protester exposes authorities’ cruelty & risk of further bloodshed. The clear aim of Iranian authorities is to instil fear among the public in a desperate attempt to cling to power and end the popular uprising. https://t.co/zwCAINbiuO

“Prisoners are the Islamic Republic’s hostages … Families abide by whatever the hostage-taker wishes to save the lives of their loved ones. But experience teaches us that silence only worsens the prisoner’s condition because the Islamic Republic is not just targeting a person. They take hostages and issue death and prison sentences to crack down on the whole society,” said rights activist Atena Daemi in a series of tweets Thursday and urged families not to keep silent on their detained loved ones’ circumstances before it is too late.

On Monday, the IRGC praised Ali Khamenei’s Judiciary for its severe stand and demanded that it issue swift judgments for defendants accused of “corruption on earth”, or Moharebeh. Both concepts are incompatible with modern jurisprudence and provide clerical judges wide latitude to convict people to death in kangaroo courts, often with no defense lawyers and behind closed doors. The defendants have no way of challenging state evidence or introducing witnesses.

Storeowners in at least 80 cities were on strike and dozens of universities and schools across the country saw their students boycotting their classes. People throughout Iran were involved in an expansive three-day campaign that included anti-regime protests, rallies, gatherings, demonstrations, and marches.

December 8 – Sanandaj, western #Iran
Locals are on strike and continuing the nationwide protests against the regime on the 84th day of the uprising.#IranRevolution2022#اعتصابات_سراسری pic.twitter.com/MvWmZNUheq

December 8 – Ravansar, western #Iran
Storeowners held a gathering outside the local governor's office protesting the authorities' decision to shutter their stores in response to their recent strike in solidarity with #IranRevolution2022.#مرگ_بر_ستمگر_چه_شاه_باشه_چه_رهبر pic.twitter.com/9Ui5sSnhKH

December 8 – Najafabad, central #Iran
Storeowners held a gathering protesting the authorities' decision to shutter their stores in response to their recent strike in solidarity with #IranRevolution2022.#مرگ_بر_ستمگر_چه_شاه_باشه_چه_رهبر pic.twitter.com/E3vPPzaEPY

On Thursday morning storeowners in the cities of Sanandaj in Kurdistan Province, Ravansar in Kermanshah Province, and Najafabad in Isfahan Province took to the streets protesting decisions by authorities to shutter stores of those who participated in the recent three-day strikes in solidarity with the ongoing Iranian revolution.

In Sanandaj, family and friends were seen gathering in the early morning hours today for the burial of Hooman Abdullahi, killed by regime security forces in the recent protests. Signs of pellet rounds and broken bones were evident on his body, according to eyewitnesses. The funeral was held while security forces tried to prevent anti-regime protests.

December 8 – Yazd, central #Iran
Locals set ablaze a site of the regime's IRGC paramilitary Basij units continuing the nationwide protests against the regime on the 84th night of the uprising.#IranRevolution2022#مرگ_بر_ستمگر_چه_شاه_باشه_چه_رهبر pic.twitter.com/BMQ0PZQQME 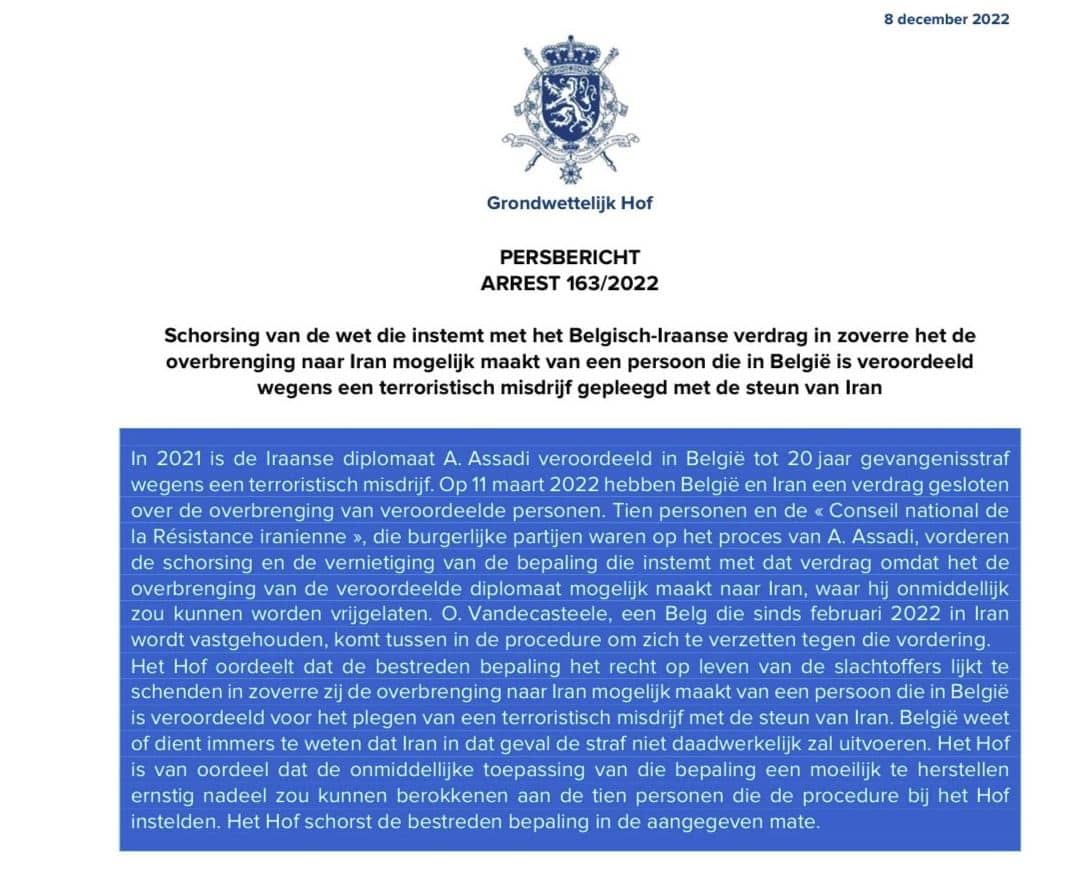 Assadi and his three co-conspirators attempted to bomb the National Council of Resistance of Iran (NCRI) annual “Free Iran” summit in Paris. Prior to his incarceration, Assadi operated as the chief of the regime’s network of espionage and terrorism in Europe while posing as the third counselor of Iran’s embassy in Vienna.

According to the state-run media outlets, Iran’s genocidal regime hanged Mohsen Shekari, a 22-year-old arrested protester, today at dawn. He was arrested on September 25, charged with “Moharebeh,” or waging war on God, and was sentenced to death in a sham trial and after days of torture for making forced confessions. 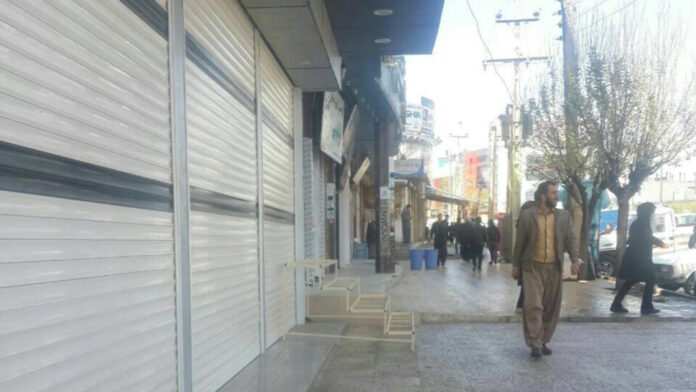 Iran is marking the annual Student Day on Wednesday, December 7, as the nationwide uprising expands into the 83rd following two days of extensive strikes by store owners in at least 80 cities and students at dozens of universities and school across the country boycotting their classes. On December 7, National Student Day in Iran, Ali Younesi and Amir Hossein Moradi, two elite students at the Sharif University of Technology, marked the event in an open letter.

Authorities detained Younesi and Moradi in April 2020 and sentenced them to 16 years in prison on charges of sympathizing with the main Iranian opposition movement, the People’s Mojahedin Organization of Iran (PMOI/MEK), acting against “national security”, and “engaging in propaganda,” according to then-Judiciary Spokesperson Gholam-Hossein Esmaili, on May 5, 2020. 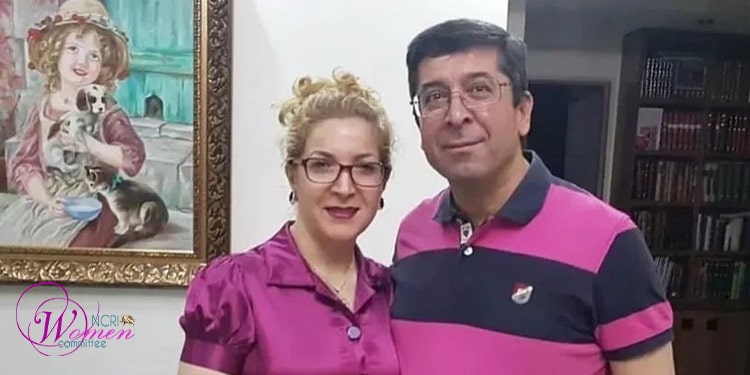 An innocent couple, Dr. Hamid and Farzaneh Ghareh Hassanlou were handed down a death sentence and heavy prison time in exile for participating in peaceful protests.

On Day 83 of the Iran uprising, Iranian women and men showed greater determination to topple the clerical regime and bring about regime change. Simultaneously, the mullahs are doing their best to quash the protests by issuing death sentences for the arrested protesters.