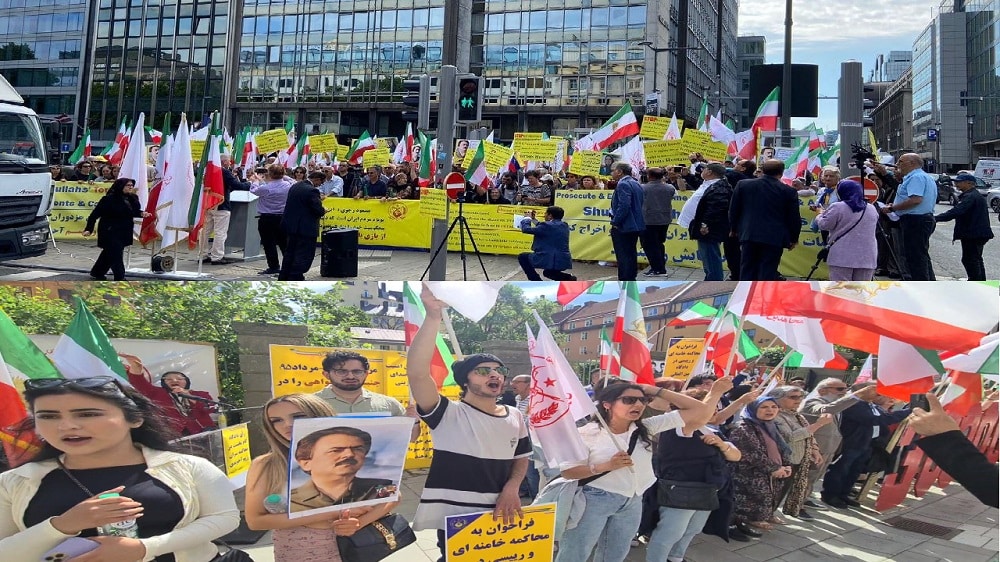 The Swedish Judiciary Upheld a Life Sentence for Hamid Noury, One of the Perpetrators of Genocide and Crimes Against Humanity in 1988 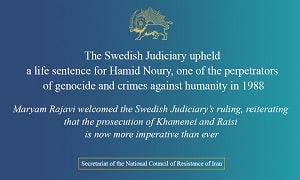 Mrs. Maryam Rajavi, the President-elect of the National Council of Resistance of Iran (NCRI), welcomed the conviction of Hamid Noury, one of the perpetrators involved in genocide and crimes against humanity in 1988, by the Swedish judiciary to life imprisonment and called it a first step in the path of full justice. She added that comprehensive justice, of course, will be achieved when the main perpetrators of the crime, especially Ali Khamenei and Ebrahim Raisi, and other perpetrators, are put on trial in the courts of a free Iran or international tribunals. 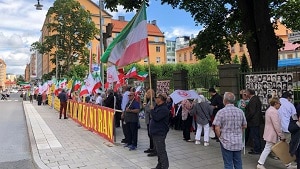 On Thursday, July 14, 2022, a court in Stockholm, Sweden, declared its final verdict on the case of Hamid Noury, an ex-prison official in Iran’s Gohardasht prison who was involved in the torture and execution of political prisoners. Noury was being tried for his role in the massacre in the summer of 1988 of 30,000 political prisoners, 90 percent of whom were members and sympathizers of the People’s Mojahedin Organization of Iran (PMOI/MEK). The court sentenced Noury to life in prison for committing serious crimes against international law and murder. 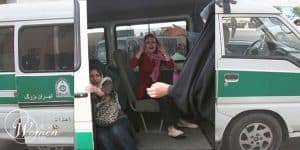 Some 1,700 women have been called to the province’s police stations for improper veiling since March 2022. The police chief of Kermanshah Province, western Iran, announced during a news conference.

Ali Akbar Javidan said more than 22,000 public notices had been given concerning moral security, failing to observe the mandatory Hijab, improper veiling, or falling back on the regime’s dress code in three months and 20 days. The Spokesperson of Iran’s Armed Forces said people with “improper hijab” especially celebrities and those in the movie industry who do not observe the regime’s mandatory hijab laws were “Satan’s army”.

Speaking at a hijab festival, Abolfazl Shekarchi said that those he deems as “improperly veiled” were “brazenly waging war against the Quran”. 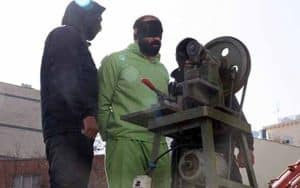 The prosecutor of Khorasan Razavi Province said that the amputation sentences against some people convicted of robbery are in the implementation phase and awaiting legal formalities.

Mohammad Hossein Daroudi announced the “beginning of a new phase of decisive judicial actions” and without referring to statistics, he said that some of these cases are in the implementation phase, the state-run Khorasan newspaper reported on Thursday.

Iranian Resistance Supporters in the Large Demonstration in Brussels: Don’t Free Terrorists! No to Appeasement!

July 14, 2022, ‌Brussels: Thousands of freedom-loving Iranians, supporters of the People’s Mojahedin Organization of Iran (PMOI/MEK) held a massive demonstration near to the Belgian parliament based on a prior notice by the Iranian community in Belgium. Iranians voiced their protests against the shameful deal between Iran’s regime and Belgium government to free the convicted terrorist-diplomat Assadollah Assadi.

Two Major Demonstrations, One Cause: Holding Iran’s Regime to Account 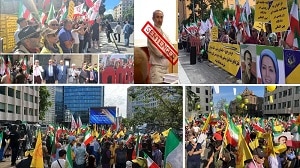 On Thursday, July 14, freedom-loving Iranians held two significant demonstrations in Brussels and Stockholm. They called on the European states to hold Tehran to account and not concede to the terrorist and mass murderer mullahs.

However, the demonstrations coincided with a historic victory for the victims of the mullahs’ human rights violations, particularly for the families of more than 30,000 political prisoners extrajudicially executed during the summer of 1988. Remarkably, most victims were affiliates of the opposition People’s Mojahedin Organization of Iran (PMOI/MEK).