COMING Up: Demo in Paris Against Human Rights Abuses and Environmental Destruction in Iran 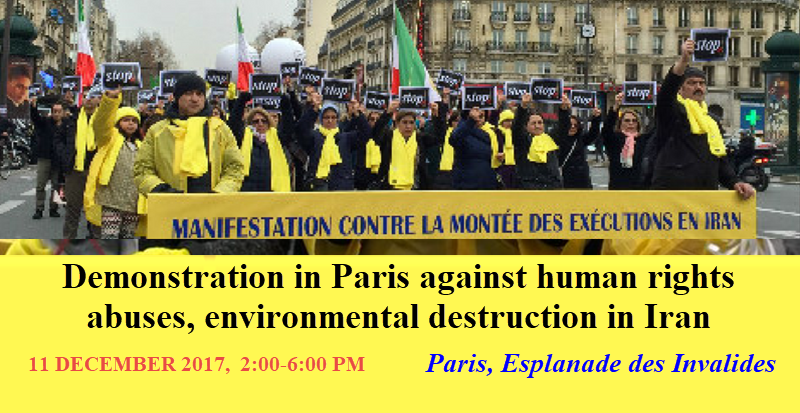 On the occasion of International Human Rights Day and on the eve of the Climate Summit in Paris, a demonstration will take place on Monday, 11 December 2017, at Esplanade des Invalides.

The objectives of the demonstration are:

• To protest the grave and flagrant violations of human rights committed by the religious dictatorship of the mullahs in Iran;

• To denounce the destruction of the environment by the institutions in power in Iran, in particular, the industries linked to the Revolutionary Guards (IRGC);

• To denounce the IRGC’s ballistic missile program and bellicose interference in the region.

The latest UN report paints a bleak picture of the human rights violations in that country. Since Hassan Rouhani's took office as President in 2013, more than 3,200 people have been executed.

Monday's demonstration is a protest against executions, the denial of fundamental rights such as freedom of expression, thought and religion, the repression of women (under the pretext of the compulsory veil) and their harassment by the IRGC and Bassij militias, and discrimination against ethnic minorities in Iran.

On the one hand, the regime is killing its citizens and on the other hand, through its interference and its missiles it is threatening the peoples of the region. The mullahs in power do not stop there: they also destroy the environment. Through the non-standard exploitation of natural resources, in the service of a policy of militarization and profit, the regime and the IRGC have drained lakes, lagoons, rivers, and destroyed meadows and forests.

By taking part in the 11 December 2017 march in Paris, the Iranian community in France want to call out loudly for an end to human rights violations and environmental destruction in Iran and support the aspirations of the Iranian people to overthrow the religious dictatorship and establish a free, democratic and secular republic.