A Round-Up of the Latest Protests in Iran 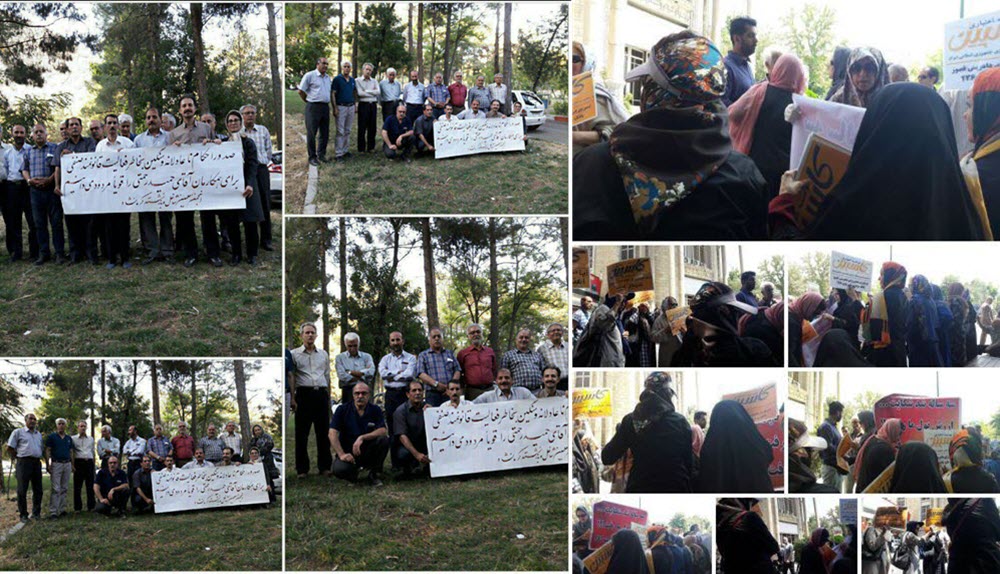 A number of anti-regime protests were held in Iran in the past 24 hours, including over a recent prison sentence against a teachers’ rights activist and deteriorating livelihood conditions for Iranian workers.

On Monday, July 8, 2019, a group of teachers in Kermanshah, west of Iran, rallied in protest to a court verdict against one of their colleagues in Isfahan.

The protesters carried placards condemning a sentence issued against Hamid Rahmati and pointing out that his activities were lawful.

Hamidreza Rahmati, a member of the Isfahan Teachers' Association, was sentenced by Shahreza Penal Court to 18 months in prison, 74 lashes in public and a monetary fine for holding a sit-in over the detention of protesting teachers.

Also on Monday, plundered clients of the state-affiliated Caspian, Thamen al-Hojaj and Iranian Alborz financial institutions protested against the authorities failure to meet their demands.

The plundered clients gathered in front of the Tehran Prosecutor's Office, demanding their stolen money be returned.

All these investment firms are affiliated to the Revolutionary Guards (IRGC) and regime officials that have stolen billions of dollars' worth of investors’ money. The past few years have seen constant protests by the customers of these credit institutions.

Protest by employees of credit institute

On Monday, a group of employees of the state-affiliated Vahdat Cooperative Credit Institute protested over the blockage of their financial deposits and lack of job security in front of the institution's building in Khorramabad, western Iran.

Protests by workers of pharmaceutical company

On Monday, a group of pharmaceutical workers protested outside government buildings over their job problems.

According to the state-run ILNA news agency, the protesters were workers of the Bakhtar Bioshimi pharmaceutical manufacturing company. They gathered in front of the Health Ministry and the regime’s Court of Justice in the capital Tehran.

Yazdan Nourbakhsh, a representative of the Bakhtar Bioshimi workers’ council in Kermanshah, said: " Bakhtar Bioshimi Company has 30 years of experience in Kermanshah province, which has been faced with a drug pricing problem by the country’s Food and Drugs Administration so it cannot produce drugs.”

The company, which is a pharmaceutical drug producer, cannot continue to operate because of the low level of prices set by the authorities, and since March 21 this year, has been forced to dismiss 55 workers among its 100 workers.

On Monday, a group of residents of the Bustan district of Basht City held a protest against lack of water that they have faced for the past two days.

Some residents said that due to dysfunctional water pumps, the water was cut off for two days and the heat of the summer became difficult for the people. There is no water for cooling devices, nor for washing and sanitation, they said.

Protest by bus drivers in Tehran

On Monday, three drivers from the Syndicate of Workers of Tehran and Suburbs Bus Company gathered in front of the Ministry of Cooperatives, Labor and Social Welfare in protest of their dismissal from the work and bogus files being concocted against bus drivers.

Nasser Moharamzadeh, Farahnaz Shiri and Hossein Karimi Sabzevar, are three drivers who have been fired after the authorities created false files against them in the company.

Farahnaz Shiry, the first female driver of the Tehran Bus Company, was fired about 10 years ago, and the authorities have prevented her return to work.

On Sunday, July 7, a group of lease vehicle drivers from the Gachsaran oil and gas exploitation company gathered in front of the company's central office in protest to a non-raise in their salaries.

They protesting to the failure of the authorities to pay their rights and other demands.

According to the drivers, they only had about 13 percent increase in salaries this year, and the insurance of one of the drivers has been completely interrupted. They therefore decided to stop working today. The drivers complained about the bad economic situation and many problems brought about due to corruption and mismanagement by the regime.