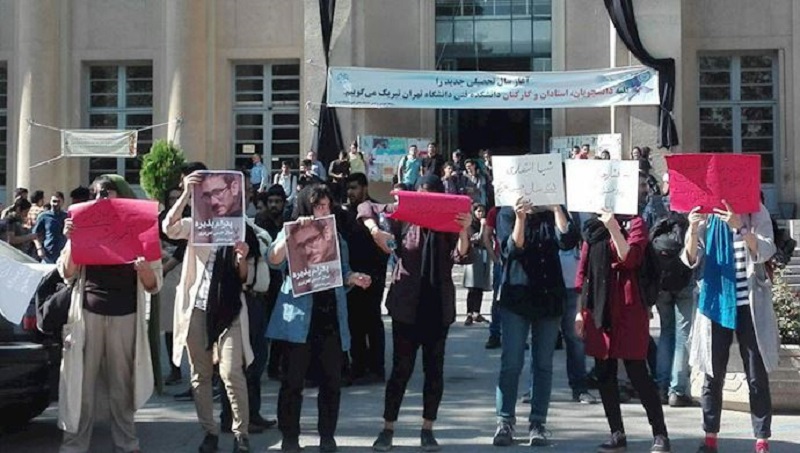 It has been reported that students at Tehran University in the country’s capital have been protesting. On Wednesday 16th October, students gathered at the mosque on campus for several reasons. Firstly, to protest about President Hassan Rouhani’s presence there. Secondly, the students were protesting the arrest and imprisonment of many of their fellow students that have been detained and handed large prison sentences for their activism. The students slammed the regime for denying the fellow students continuance of their education.

After gathering at the university’s mosque, the students then went around the campus voicing their concerns. They were heard chanting: “Girls’ dormitory is a jail”, “classrooms are empty since students are jailed” and “free all imprisoned students”.

The students highlighted that the regime has sentenced students to more than 100 years in jail in total since President Hassan Rouhani has been in office.

Another concern for students across the country is the payment of tuition fees. The government is supposed to subsidize students in the country, but this has dwindled down to nothing meaning that many people no longer can afford to go to university. Officials at some universities are carrying out corrupt practices of raising tuition fees.

Soha Mortezaii who has a Master of Science in Humanities degree started a solo protest outside the Central Library of Tehran University on Saturday 12th October. Her sit-in commenced on this day and has lasted five days so far. The former secretary of the students' Central Council of Tehran University was protesting because she has been deprived of being able to continue her Ph.D. studies. She was also calling out the failure of the Student Evaluation Organization, university officials and the Sciences Ministry to pursue her case.

She was arrested in January last year and sentenced to 6 years in prison. She has also been banned from joining or belonging to any political or social groups or parties for two years.

It has also been reported that a female student and labor activist that is currently being detained in the Qarchak Prison of Varamin is on a hunger strike. Atefeh Rangriz started her protest on Wednesday 16th October in protest against the unjust way her case has been treated.

Students at the university in the same city started protesting on Monday 14th October. They were protesting about the decision made by university officials to charge them tuition fees at the end of the term. They were calling for the cancellation of these fees.

At the Polytechnique University of Amir Kabir, protests took place on Sunday 13th October because of the hefty tuition fees that the university was demanding.

Women and students are being constantly repressed in Iran and it is because the Iranian regime sees them as a major threat to its existence. And so it should because young people and women in Iran have made it very clear that they want regime change and they are not going to rest until the regime finally falls.