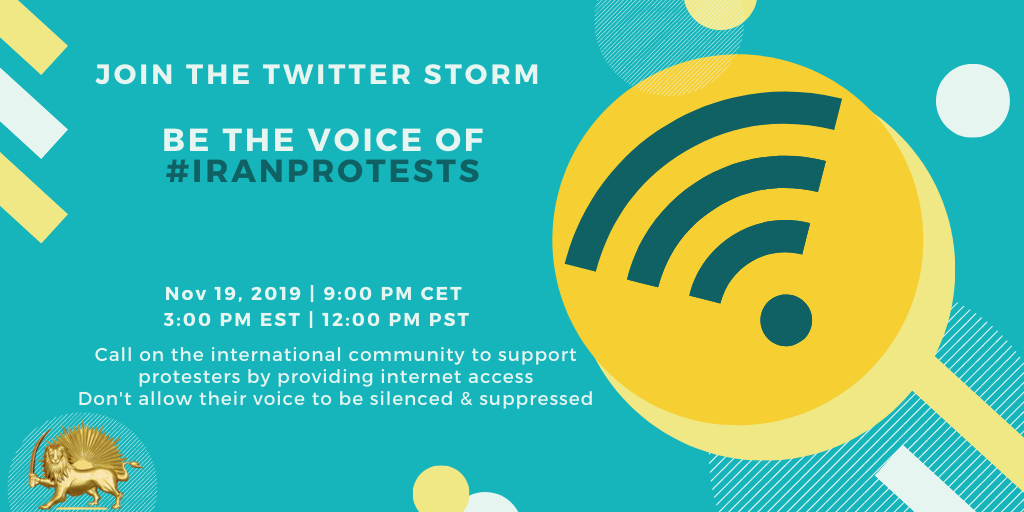 Be the voice of Iran protests join campaign calling for #internet4iran

Written by Mahmoud Hakamian on 19 November 2019.

Iranians around the world plan to hold a tweetstorm later on Tuesday demanding freedom of access to the internet in Iran, as anti-regime protests continue unabated for the fifth day and the regime continues to keep the internet shut down in Iran.

The event will call on the international community to support protesters by providing internet access to the people of Iran.

According to NetBlocks, an organization that monitors freedom of the internet, 65 hours after Iran implemented a near-total internet shutdown, some of the last remaining networks are now being cut and connectivity to the outside world has fallen further to 4 percent of normal levels.

Network data from the NetBlocks internet observatory confirm disruptions with multiple fixed-line and mobile providers in Iran, as protests continue against the regime.

The outages have near-total impacts affecting multiple cities including Tehran.

Users first reported outages in Mashhad, which has also seen a drop in connectivity beginning on the evening of November 15, NetBlocks reported. The disruptions have increased in extent and severity as of 21:15 UTC Friday (12:45 a.m. local time), continuing as of 00:00 UTC Saturday, with impact also visible on overall connectivity charts.

On Monday, November 18, United States Secretary of State Mike Pompeo on Monday told a press conference: "The Islamic Republic must cease violence against its own people and should immediately restore the ability of all Iranians to access a free and open Internet.  The world is watching."

On Tuesday, November 19, the Spokesperson for the UN High Commissioner for Human Rights, Rupert Colville, said:  “We also call on the Government to immediately re-establish Iranians’ access to the internet, as well as other forms of communication, which allow for freedom of expression and access to information.”

#IranProtests: We are concerned by reported use of force against demonstrators & alarmed that live ammunition has allegedly caused significant number of deaths. Such protests are an indication of deep-rooted grievances that cannot simply be brushed aside: https://t.co/DnSJ8X3U99 pic.twitter.com/GU5MUyfBeF