Demonstrations in Tehran and other cities despite heavy security presence: Al-Arabiya TV 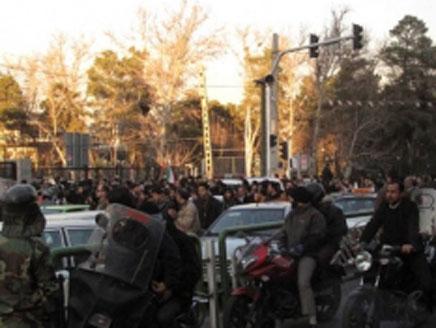 NCRI – The Arab-language TV network al-Arabiya reported on Monday that thousands of people protested in Iran inspired by revolutions in Tunisia and Egypt.

“There were thousands of people walking towards Azadi Square. There were some scuffles. I saw smoke,” said a witness, according to the TV channel.

Another said around 1,000 policemen were deployed at Haft-e Tir Square, Karim Khan Avenue, Ferdowsi Square and Hafez in Tehran. “Around 1,000 anti-riot policemen were also deployed in and around Imam Hussein Square, a witness said.”

“The demonstrators marched down Enghelab and Azadi (Freedom) streets, leading to Azadi Square, a traditional rallying point for protests in central Tehran dominated by a huge white marble arch.”

Hundreds of marchers also gathered in the cities of Isfahan and Shiraz, the Arab-language TV channel said citing witnesses.

Previous articleTwo prisoners publicly hanged in southern Iranian city
Next articleMany arrested, injured and beaten in the uprising of 14 February