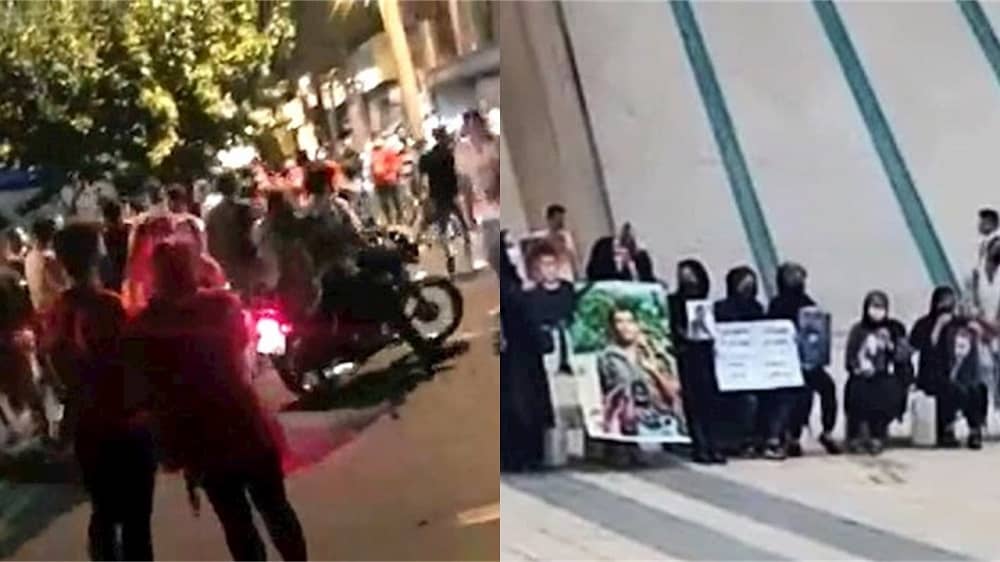 It has been sixteen days since the protests began in Khuzestan province. These protests, which initially started due to the water shortages, have turned political, continued, spread to other cities. People have been targeting the regime and its Supreme Leader in their slogans. The regime has increased its oppressive measures. Over 12 people have been killed in Khuzestan in the past few days, and to freely oppress people, the regime has imposed an internet blackout in Khuzestan.

Yet, the regime has so far failed in controlling society by taking these measures.

On Friday, July 30, dozens of mothers of the victims of the November 2019 protests in Tehran started a march and protests in solidarity with the people of Khuzestan.

While holding the pictures of their slain loved ones, they marched and chanted anti-regime slogans and encouraged people to rise against the mullahs’ regime.

In this regard, Mrs. Maryam Rajavi, the opposition’s president-elect, said:

“Hail to the brave mothers of the November 2019 martyrs who have risen to seek justice for their children and the children of Khuzestan. Your cries are the cries of Iran, seeking justice for 42 years of slaughter, executions, torture, plunder, poverty.”

Hail to the brave mothers of the Nov. 2019 martyrs who have risen to seek justice for their children and the children of #Khuzestan. Your cries are the cries of #Iran, seeking justice for 42 years of slaughter, executions, torture, plunder, poverty. #IranProtests

The regime’s security forces arrested the mothers of the November 2019 martyrs, but fearing people’s backlash, released them after few hours.

Soon, following a soccer match, people in Tehranpars, east of Tehran, poured on the street on Friday night. They blocked roads and were heard chanting: “No Gaza, No Lebanon, my life for Iran,” “Death to the dictator,” “Down with the Supreme Leader,” “the Supreme Leader is our disgrace,” and “this is the last word, we are aiming the entire regime.”

Once again, these slogans and protests showed the explosiveness of Iran’s society and the regime’s failure in controlling it.

July 31 – Bahrestan, northern #Iran
Early hours after midnight
Locals in the streets protesting and chanting:
"All these years of crimes, down with the mullahs' regime!"#IranProtests #اعتراضات_سراسری pic.twitter.com/2KeolU4Q8M

Now the regime has approved the internet censorship bill to silence the Iranian people’s voice calling for freedom.

While the regime has not yet implemented this plan, the state-run media and officials warn about its consequences and how it could spark a new set of protests.

“While economic pressure, drought, the coronavirus outbreak, etc. have frustrated people and flames of rage increase in people, the parliament approves this bill,” wrote the state-run Ebtekar daily on July 31, 2021.

“This plan not only increases the livelihood pressure on the people by creating two million unemployed but also worsens the flow of information and freedom in Iran. In other words, the resistance front against this plan includes many different deciles,” Ebtekar daily adds.

It then warns that if this plan would be implemented, the regime’s new government would only inherit an uprising.

“The fear of futures is the most important factor in erupting people’s anger. This internet protection plan is intended to reinforce the fear of the future and intensify anger,” Ebtekar wrote.

The regime is willing to impose the internet blackout because it is afraid of the domestic consequences of major protests and fears the international community’s reaction.

These protests show the regime’s weakness and illegitimacy, thus preventing the regime’s apologists and those seeking the appeasement policy to continue promoting the false notion of the regime being stable.

In recent days, many lawmakers from the European countries and the United States have supported the Iranian people’s righteous demands. Particularly, European lawmakers have criticized their governments’ weak approach toward the regime and urged them to support the Iranian people.