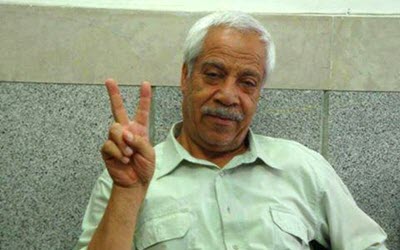 NCRI – In a revealing letter, Hashem Khastar, member of teachers’ trade union in Mashhad and former political prisoner, while supporting the political prisoners who are on hunger strike, called for their immediate release.

In his protest letter to Iranian regime’s Supreme Leader Ali Khamenei, Mr. Khastar writes: “The hunger strike by Arash Sadeghi for over 70 days is a shame and disgraceful stain on the Islamic Republic that like other disgraces will never be erased. Why don’t you release him?”

“You have made the world of Iranian people and the Middle East like a hell, the people whom (you claim) you want to take to heaven. The hunger strike by political prisoner has entered a phase that like the tragedy of Grave Sleepers has shocked the nation and they are asking what is happening in this country?”

“During the Shah’s regime, we had Halabi Abad (where people lived in shacks built from large tin cans) and now they become Grave Sleepers. In our country, every year the middle class is declined and added to the poor class. Only under your rule, a new but small predatory class called embezzlers has emerged plundering our national wealth.”

“Mr. Khamenei, if you are not aware, wear disguised clothes and go among people to see that because of your oppressive rule the people moans and cries have reached the heaven. Mr. Khamenei, do not give us the wrong address that you have told about this to the regime’s officials. Everyone knows that you are the leader of the regime’s officials and bear the most responsibility. People know well that the current situation it is the product of your management.”

“Khamenei, don’t be deceived by such grand titles as Supreme Leader and the Guardian of the world’s Muslims. What country with 3 million child labor and 13 million absolute poor, spends $6 billion dollars on a grave (Khomeini’s grave)!?”

“People like Arash Sadeghi, Esmail Abdi, Beheshti Langaroudi, Ali Akbar Baghani and many others, what danger do they pose that they must be imprisoned or exiled? Do the teachers, Esmail Abdi, Beheshti Langaroudi, and Baghani…, disrupt the security or the thieves and plunderers who are at the helm of the government and the system? The world is too small. No one can escape accountability and justice. One day you will be held accountable and must answer for your actions.”

“So, know this and be aware that this situation cannot be sustained and be afraid of people’s anger and fury.”