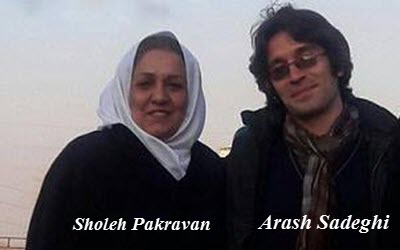 NCRI – Sholeh Pakravan, mother of Reyhaneh Jabbari a young Iranian interior decorator who was hanged on 25 October 2014 for the simple reason of having defended her dignity at the age of only 19 when an agent of the regime had tried to sexually assault her, in a written statement while supporting Arash Sadeghi announced that she will also continue her hunger strike until the end of this political prisoner’s hunger strike.

In part of her statement, Ms. Pakravan writes:

“Whatever I eat, it does not go down my throat. The image of skinny Arash who has lost over 20 kg of his weight after the hunger strike while coughing up blood clots is always in my mind. I decided, rather than biting a morsel of food, close my lips to food and whisper and say: Oh Arash, I would rather die than seeing your hungry cells and dried blood vessels. I will stage a hunger strike starting tonight (now) and will not eat or drink anything but water and tea until Arash ends his hunger strike. This hunger strike is just a reaction of a mother toward the hunger of a youth whom she considers to be like her son, to accompany and support Arash Sadeghi and say that it not just his mother that accompanies him and understands his hunger.”