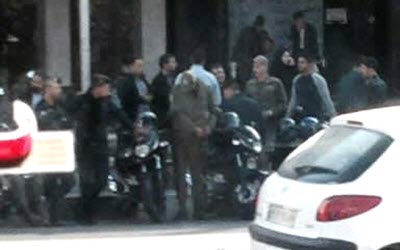 NCRI – According to reports, on Monday October 31, a large crowd gathered once again in front of Baqiatollah hospital in Tehran, where political prisoner Mohammad Ali Taheri is hospitalized, to protest his continued detention.

Reports indicate that the Police and Security Forces attacked the demonstrators with batons and arrested a number of people while severely beating them.

Violence of the Security Forces was so much that one of the women who participated at the rally suffered “shoulder dislocation” and was taken to hospital.

Some detainees reportedly were severely injured and are in poor condition.

The rally comes at a time when Mohammad Ali Taheri in his thirty-fourth day of hunger strike remains in critical health condition.

Previous articleIran: Commemorating PMOI/MEK Martyrs of 2015 Missile Attack
Next articleIran: Call to immediate release of the arrested at Pasargadae