Iran: Protesters Gather in Front of UN Office in Tehran 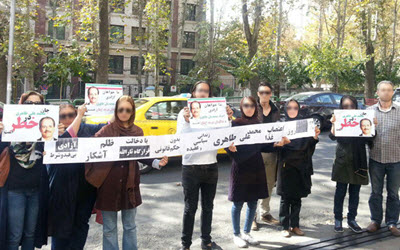 NCRI – A group of protesters against imprisonment of ‘Mohammad Ali Taheri’, held a protest gathering in front of the UN office in Tehran on Sunday October 30, asking for the release of the founder of ‘The Ring Mysticism’.

They demanded that the UN officials ask the regime’s authorities to put an end to the unjust and illegal imprisonment of Mohammad Ali Taheri.
The gathering was held on the 33rd day of Taheri’s hunger strike which has raised concerns over his health status.

It should be pointed out that neither his family nor his students have any info on Taheri’s physical condition while the regime’s judiciary and intelligence officials refuse to give any kind of information in this regard, either.

Besides, a number of protesters against imprisonment of Mohammad Ali Taheri were arrested and are currently being held in Fashafooyeh and Gharchak-Varamin prisons. They, too, have gone on hunger strike from the first hours of their arrest to protest against the security forces’ violent and unlawful conduct.

A number of the detainees have been severely beaten at the time of their arrest and are currently in a poor physical condition with their injuries untreated.

There is still no information on the exact number of the strikers, their charges, status or their possible fate.

Previous articleIran: Citadel (Arg-E-Bam) Restoration Project Workers Hold a Protest Gathering
Next articleIran: Organizers of the Cyrus the Great Day Were Arrested at Pasargadae in Fars