Iran: Organizers of the Cyrus the Great Day Were Arrested at Pasargadae in Fars 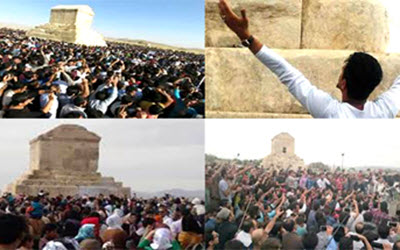 NCRI – The Iranian regime prosecutor in Shiraz (Fars province, southern Iran) announced that the “main elements” of the Cyrus day gathering and demonstration in Pasargadae cultural heritage complex are arrested. He said judicial case is made for these citizens and they will be dealt with “according to necessary judicial regulations.” This judicial authority did not mention the names and number of the arrested people or any more details.

According to the state-run ISNA news agency on October 31, Ali Salehi, public prosecutor of Shiraz, claimed: “Actions of these people had earlier been monitored by the security, intelligence and law enforcement apparatus,” and added “After conducting the necessary investigations, the leaders and main elements of the demonstration who attempted to chant unconventional and norm-breaking slogans were arrested for their anti-values activities.”

It should be mentioned that state-run media of both ruling factions described the popular annual gathering at Pasargadae as a move against the mullahs’ regime and called for confrontational measures against such gatherings.

“The slogans of demonstrators on Friday at Pasargadae showed that the anniversary of Cyrus is only a pretext to target the principle of the system (regime),” a state media wrote and added, “The slogans of ‘neither Gaza nor Lebanon’ as well as ‘freedom of thought cannot be [obtained] with beard and pashm [Ovine-wool-like beard, a metaphor for hypocrite mullahs]’, which have been transferred from the streets of Tehran to the Marvdasht plains [Shiraz].”

Another state-run media wrote: “Designing a day as ‘Cyrus day’ is not unexpected. If the parliament and the country’s cultural administrators attempt [to solve] this important issue, the road to destruction and polarization [of the society] will be closed on some people.”

It should be pointed out that on Friday October 28, thousands of people from across the country gathered in Pasargadae calling Cyrus the Great “the founding father of human rights” and an “honor for every Iranian.” They chanted patriotic and anti-regime slogans such as: “Freedom of thought cannot be with beards” , “Death to the dictator” , “Iran is our homeland, Cyrus is our father” and “The clerical regime, only oppression, only war” as well as “Merciless commander (General) has plundered Iran” and “Let go Syria, think (take care) of us (address our situation.)”