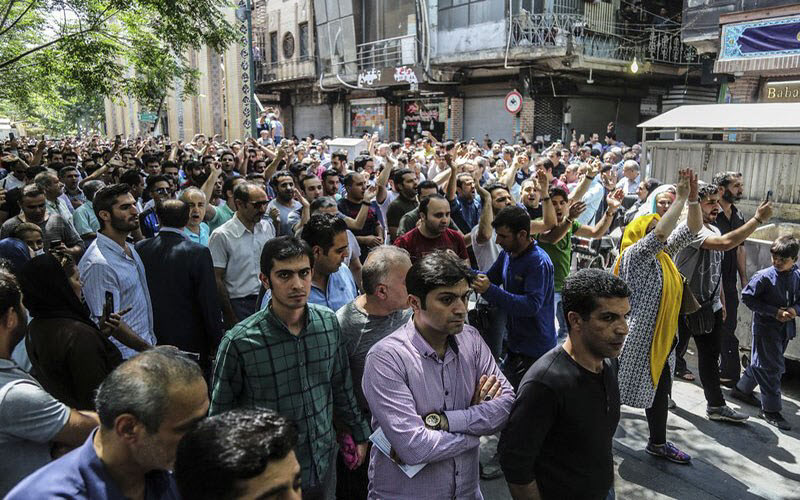 Since the major uprising in Iran at the end of last year, people across the country have continued to protest. There is currently a protest being held by traders at the Grand Bazaar in Tehran. The traders are angry about the plummeting value of the rial, the country’s currency, and the rising prices.

The shops at the Grand Bazaar were closed and thousands of people took to the streets. As the protesters made their way towards parliament, the suppressive forces and riot police used tear gas in an attempt to disperse the crowds.
It is being described as the biggest protest in the city since 2012.

In 2012, the people took to the streets to protest against the government’s response to international sanctions that were having a devastating effect on the economy. It was these protests that pushed the government to agree to nuclear talks and eventually the nuclear agreement.

The current protests in Iran have received widespread support from the Iranian people and the protests have spread across the city.

Reports indicate that protesters in the street were chanting: “Death to Khamenei”, “Death to the Dictator”, “Our enemy is right here, they falsely claim it is the US”, “Do not be afraid, do not be afraid, we are all together” and “Iranians will die but shall never accept humiliation”

Furthermore, protests have broken out in other parts of the country including Shiraz, Kashan, Shahriar, Karaj, Bandar Qeshm, Kermanshah, Mashhad and Bandar Abbas. In Bandar Abbas, demonstrations turned into a clash.

The brave people of Iran are risking injury, arrest, torture, imprisonment and even execution to take to the streets to make their voices heard. They know that they are stronger together and they refuse to be silenced by the cruel, corrupt and violent regime that is destroying the country.

The President-elect of the National Council of Resistance of Iran (NCRI), Mrs. Maryam Rajavi, saluted the people who are participating in the uprising. She called on all merchants, shopkeepers and tradesmen to join the protests in the streets. She equally called on the young people to show their support.

Mrs. Rajavi added: “The currency crisis, the recession and high prices is the outcome of the policies of the regime that has wasted the assets of the Iranian people, either by spending on domestic repression, nuclear projects, export of terrorism and fundamentalism and warfare in the region, or have been looted by the regime’s corrupt leaders. In the nationwide uprising last January, by chanting “Death to Khamenei-Rouhani”, the people emphasized the fact that the root of all economic and social problems under the ominous rule of the mullahs lies in the ominous regime of mullahs and because of the interests of all factions of the regime and its anti-human and anti-Iranian polices.”

On 30th June, the NCRI will hold its annual Free Iran rally in Paris where the brave martyrs of the resistance will be commemorated and steps will be taken to move Iran further towards freedom, democracy, equality and the respect of human rights.

Previous articleSanctions Need to Be Concise and Target the Most Critical Aspects of Iran Regime’s Belligerence
Next articleIran: Can the Current Regime Recover the Collapsing Economy?