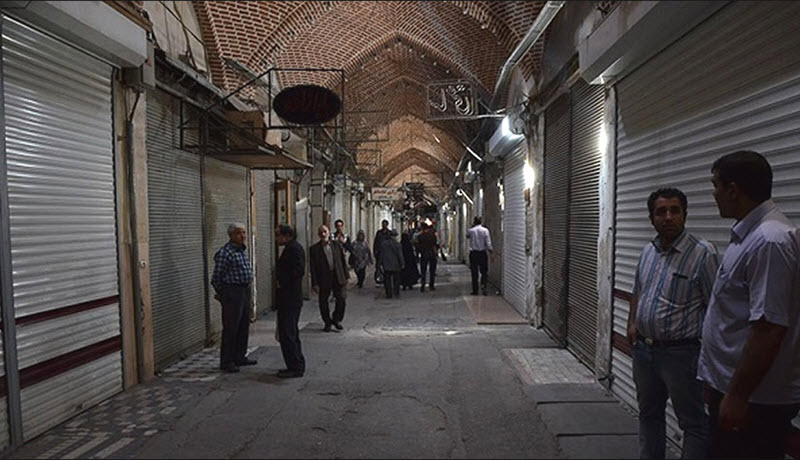 Bazaar workers across Iran have started to strike in solidarity with the truck drivers that have also been on strike. Unrest across the country is growing as the economic situation gets worse.

In the city of Shiraz, merchants in the local bazaars started a protest that quickly spread to more than 50 cities across 21 provinces.

The country’s economy is bordering on collapse and the civil unrest is mounting. The people are very unhappy with their situation that has come about because of the Iranian regime’s domestic mismanagement and meddling abroad.

Since the end of December last year, millions of Iranians have bravely taken to the streets to make sure their voices are heard. The protests that have been continuing ever since are different to the major demonstrations that have taken place in the past. This time the people are clear on their aim – they want regime change.

They are bravely risking everything including arrest, torture, imprisonment and even execution to make sure that the future of their country is peaceful. They have called the Iranian regime out on its terrorist activities abroad and are outraged that billions have been spent abroad when it could have helped improve the social conditions at home.

Photos from inside the country show opposition activists closing their bazaars down in numerous cities. The merchants are facing an increasing number of obstacles including the decrease in value of the country’s national currency – the Rial – and the ever-increasing price of goods.

Thousands of truckers in hundreds of cities started striking three weeks ago because of the very low wages that they have and the extremely expensive parts, including tyres, that they have no choice but to pay for if they are to carry out their jobs properly.

Authorities in the country have arrested hundreds of truck drivers that are participating in the strike and it has been reported that a court has ordered the death penalty for almost 20 of them.

The Iranian regime is taking desperate measures to try and regain some of the control that it has been gradually losing over the past few months. It is using the usual tactic of threatening harsh action and increasing suppressive measures to pressure the people into abandoning protests and demonstrations.

However, the people of Iran are not bowing down to such suppressive measures and are continuing to make their voice heard.

The resolve of the people is incredible and the pressure the people is putting on the regime will eventually topple it. The regime is feeling cornered as it is also under pressure from the United States with the sanctions that have taken effect already and the ones that are due to take effect in less than a month.
The Iranian regime is not feeling the same economic hardships that the people are feeling and the people are ensuring that this unfairness is addressed. They are calling for regime change because they know it is their only hope of ever being free from tyrannical and despotic rule.