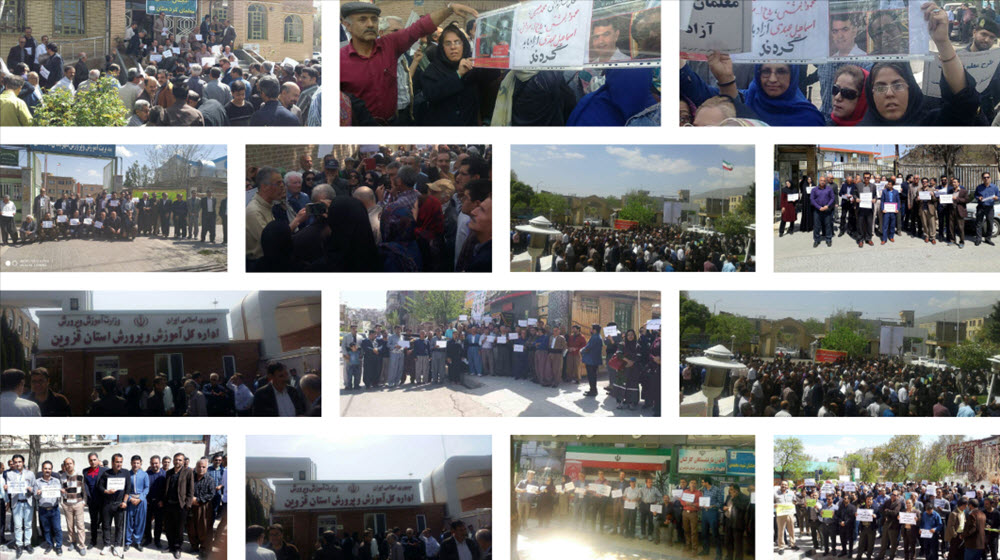 The teachers and education workers were holding handwritten placards that read:

• Imprisoned workers must be freed

• Your pain is our pain, people must rise up and join us

The protest was part of a larger movement following a nationwide call from teachers’ unions. Iranian teachers held protests in over 24 cities to mark Teachers Day, which is celebrated every year on May 2 in Iran, demand the basic rights, and call for the release of detained teachers.

More cities are thought to have joined since this list was prepared by the Iranian opposition group the People’s Mujahiddin of Iran (PMOI or MEK), which has been instrumental in helping organise the Iranian people’s protests against the Regime since December 2017, when the latest uprising began.

In Kermanshah, teachers and education workers could be were heard chanting “Majlis (parliament) and the government are not caring about the teachers.”

Teachers in many cities held handwritten placards with their demands or slogans on them.

In Hamadan, the placards read:

• Children must receive a free and quality education

• We demand decent pay for our work

In Malard, which is in Tehran province, teachers held posters and placards reading:

• Free education is the right of every child

• We demand salary and wages above the poverty line for teachers and pensioners.

The teachers are demanding:

• an end to temporary contracts

Over the past year, Iranian teachers, along with other workers and government employees, have held dozens of rallies to demand their rights and protest economic woes, government corruption and lack of political freedom. This includes three nationwide teachers’ strikes in October, November, and February.

The attack on these protesters comes just one day after the Iranian security forces arrested at least 35 people for taking part in peaceful protests to mark International Labour Day.