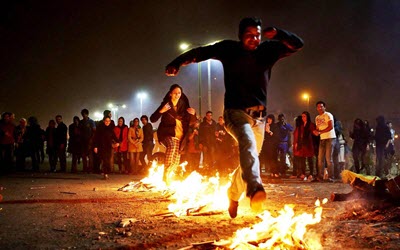 NCRI – Iranian state media and officials are voicing concerns over how the regime has failed to prevent the Iranian people from celebrating end of the Iranian calendar year Fire Festivities.

Iranian Supreme Leader Ali Khamenei has even issued a fatwa saying such celebrations are forbidden, yet to no avail. Last year he had said such celebrations have no place in sharia and people should refrain from taking part in these activities.

More than 30,000 posters and brochures have been printed to encourage people not to take part in such celebrations, as announced by state and city police in various regions of Iran.

Tehran’s governor has threatened to keep individuals arrested because during Fire Festivities celebrations.

“The Fire Festivities have become a major dilemma,” the state-run Resalat daily reported, signaling how the Iranian regime has failed to block such activities.