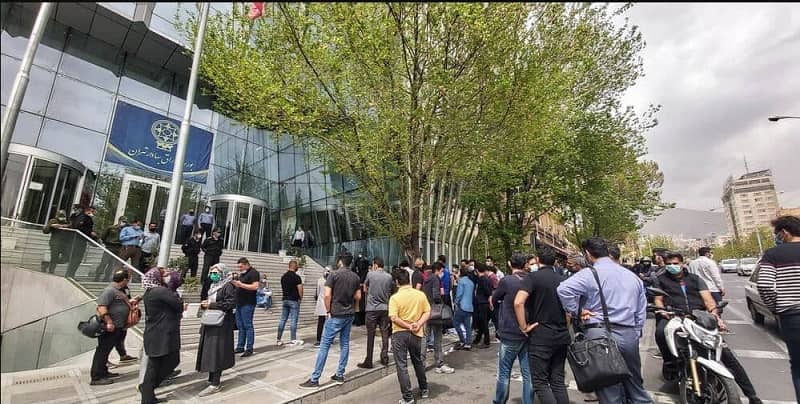 Many plundered investors of Iran’s stock market exchange held rallies in many Iranian cities in recent days. They called for boycotting of the regime’s sham presidential elections. People lost their life savings following the burst of stock market bubble growth. The regime’s president Hassan Rouhani and Supreme Leader Ali Khamenei had previously encouraged people to purchase shares at the stock market to compensate for their budget deficit.

“People do not trust you anymore. What clearer explanation for this distrust of 50 million Iranians who lost their life savings in the stock market under your responsibility,” said Ahmad Alirezabeigi, one of the regime’s MPs, on Tuesday during the parliament’s public session questioning Rouhani’s Minister of Economy.

Earlier this week, Mohammad Ali Dehghan Dehnavi, president of the Securities and Exchange Organization, acknowledged that the regime had compensated a large part of its budget deficit from profits made by manipulating the stock market. “The stock market has provided 6.8 trillion rials (approx. $28 billion) for the economy; the stock market has been the government’s source of income last year,” Dehnavi said on April 16, on the Clubhouse social media network.

The stock market manipulation and its result could be considered the largest example of plundering and systematic corruption throughout Iran’s modern history. It also confirms the regime’s institutionalized corruption and, as Khamenei once said, “the hydra of corruption,” which controls Iran’s economy.

On June 22, 2020, Khamenei encouraged people to “invest at the stock market.” “Coins and dollars shouldn’t be invested on, but the stock market is a place to invest,” said Rouhani on August 12.

The regime’s plundering is not limited to the stock market. The regime has used many other methods to plunder Iranians and prevent its collapsing economy from falling, which would result in nationwide protests. Some of these plans are:

– Rouhani’s government started a rampant banknote printing, as high as 2,000 billion tomans, or approximately $70 billion, to supply its budget deficit. “Seemingly, the government has no choice but to print banknotes to compensate for its budget deficit. Five hundred and seventy billion tomans are injected into the Iranian economy by the Central Bank daily. The Central Bank says that from February of last year to the end of February of this year, 107,640 billion tomans have been added to the monetary base. These numbers mean that another record in banknote printing has been set in the last year,” wrote the state-run Eghtesad-e Saramd daily on March 13.

April 21 – #Iran
Stock market investors are rallying in the cities of Tehran, Isfahan and Mashhad protesting being deceived and robbed by the regime, and losing their life savings as a result of investing in the stock market.#IranProtests pic.twitter.com/ulO4OiIaTd

– On February 26, Mahmoud Vaezi, chief of staff of the regime’s president Hassan Rouhani, explicitly said: “We increased the dollar exchange rate to control Iran’s economy.” By increasing the dollar exchange rate, the inflation rate, and the prices, particularly of the imported goods, rise. There have been numerous protests by all walks of life in Iran, mainly retirees, underlining in the slogans that “our expenses are in dollars, but our wages are in rials.”

– The regime has increased taxes in various forms.

As a result of the regime’s plundering, more Iranians are pushed into the swamp of poverty. Iran’s middle class has vanished, and people from this class have joined the impoverished people in the lower classes.

Therefore, protests by all walks of life across Iran have increased and intensified. From retirees and defrauded stock market investors to teachers, nurses, doctors, and farmers hold daily protests targeting the regime and its officials in their slogans.

In a nutshell, the regime’s corruption and wrong economic policies have turned the Iranian society into a powder keg. As the state-run Jahan-e Sanat daily on Sunday admitted, “people are like the fire under ashes,” and the mullahs’ corruption “has increased people’s anger,” therefore further oppression “will condense [people’s hatred toward the regime], and unpleasant reactions happen.”

Previous articleIran: What Poses the Most Danger to the Iranian Regime
Next articleEconomic Discontent Drives Growing Movement for Regime Change in Iran