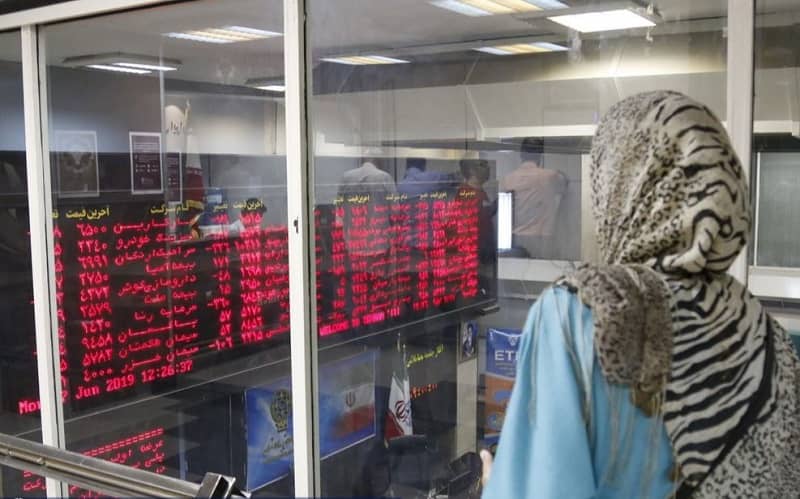 On Tuesday and Wednesday, hundreds of people gathered outside the SEO building in Tehran. They protested the regime’s role in the sudden collapse of the Tehran Stock Exchange. Iran’s Stock Exchange has finally burst.

Tehran Stock Exchange’s (TSE) main index, TEDPIX, plummeted by more than 36,000 points on Monday; and on Tuesday morning, the index further collapsed by 18,000 points in the opening hours. The sudden collapse followed a bubble growth during the summer.

The Iranian Resistance and the regime’s economists had already warned about this issue. But the regime’s President Hassan Rouhani and his government were aware and had planned to compensate their massive budget deficit.

According to the state-run Jahan-e Sanat daily on May 9, 2020, “The reduction of oil and tax revenues would lead to a budget deficit of about 2,000 trillion rials.” Thus, Rouhani planned a scheme to further plunder Iranians by using the stock exchange market, therefore encouraging people to purchase stocks.

The regime’s Supreme leader Ali Khamenei also supported Rouhani’s plan. In a meeting with a group of producers, entrepreneurs, and economic activists, Khamenei encouraged the public to use domestic goods and participate in productive investments such as cooperatives and stock exchanges.

The regime’s economists warned about the stock exchange bubble growth and that it would burst soon. After some people invested in the stock market by selling their property through the propaganda and various methods of Rouhani’s government, the stock market index rose to an astonishing 2 million points in July. Economists, however, predicted a rapid collapse of Iran’s stock exchange.

"…as Tuesday’s protests and ongoing protests across the country show, the people’s patience is wearing thin. And the regime knows that stretching its destructive policies too far will result in a violent backlash."#Iran#IranProtestshttps://t.co/9mLvsvBKrQ

In other words, while Iranians lost their life savings, Rouhani’s government was able to largely compensate its budget deficit. “I would like to announce the good news. Due to the measures devised by the government, we could have been able to compensate our budget deficit by selling securities and transferring shares of state-owned companies,” said Farhad Dejpasand on October 20, according to state-run Eghtesad online.

“In the first half of this year, we had a very brilliant performance in terms of transferring government shares in state-owned companies, and we managed to earn about 33,000 billion tomans, which is a significant figure,” he added, bragging about their success in plundering people.

Due to its economic suffocation, it was predicted that the regime would try every method to earn money. But using contradictory tools and mechanisms had adverse effects and kept the Iranian economic system in constant contradictions.

“When the government assumes that it expects an increase in oil revenues and a decrease in the price of the dollar, how does it want to prevent the stock market index from collapsing? As a result, the government is at a difficult juncture. The dilemma between reducing the dollar exchange rate and the growth of the stock market index, which experts believe are two inseparable propositions,” wrote the state-run Farasarmayeh on January 17.

“Experts predict that if the current trend continues, another heavy collapse should be expected. One of the obstacles to the stock market advancing its growth once again is the expectation of dollar exchange rate decrease, with the new administration in power in the U.S. This is not possible as Rouhani’s remarks have also increased the public mistrust,” wrote the state-run Roydad website.

Economic experts in the Iranian regime saw the stock market situation as a bubble, which was not due to a natural increase in production but because of offering the ownership of public property.

The Iranian Resistance revealed in May that the peak sales of stocks at the beginning of this year were from early March onwards. Some 70 trillion rials of shares of social security investment companies, or Shasta, were sold to two million people in the form of eight billion shares, which reached 3,600 shares for each stock exchange code, or each buyer. These shares were ten percent of Shasta’s capital.

#Iran’s #StockMarket Bubble
What miracle has happened in Iran’s #economy that the #Tehran Stock EXCHANGE has risen by 250 percent compared to the rest of the world? https://t.co/U7sCLyCsjS

Shasta is a large holding company that owns 187 large companies and 44,000 workforces.

Shasta belongs to retired people and people insured by the Social Security Organization. All the while, board members and CEOs are appointed by the Minister of Cooperatives, Labor and Social Affairs, or in other words, by the government.

Rouhani’s government owed Shasta more than 2.5 quadrillion rials. Shasta belongs to the millions of workers and wage earners who pay premiums and has nothing to do with the government. However, the regime has always encroached on this fund.

Other companies announced their shares in the stock market as well. One of these companies was Dehdasht Petrochemical, which has witnessed four percent growth in just 12 years after its launch. It’s just empty land with some brick walls. The company went on the stock exchange, and its shares have risen from 1,000 to 7,230 rials. That is a seven-fold increase. What happened when the stocks of this barren land grew so much?

Another company was Golestan Petrochemical. This petrochemical firm only exists on paper. Its shares, however, were trading at 2,800 rials. All the while, 280 billion rials of Golestan residents’ money has so far been invested in this paper project.

The recent collapse of Iran’s stock exchange market shows the regime’s economic mismanagement and institutionalized corruption. The authorities seize every momentum to plunder Iranians and fund their illicit activities abroad.

While the regime was able to compensate its budget deficit, many Iranians lost all they had. Two to three million real retailers are said to have lost their capital in the stock market.

The protests on Monday and Tuesday, however, showed people would react to the regime’s mismanagement. Now, state-run media warn of another uprising. “If we only assume two million people lost their savings, there could be rebellion,” wrote the state-run Tabnak on January 20.

“The society’s outrage is slowly building up. And we can’t predict what will happen when this hatred explodes. But what we know for sure is that this piled-up hatred will one day explode and can turn into a massive blow [to the regime],” the state-run Ebtekar daily warned on Tuesday.

Previous articleIran: Have the West Been Naïve in Dealing With Iranian Influence Activities?
Next articleIran: Coronavirus Death Toll in 478 Cities Exceeds 205,800