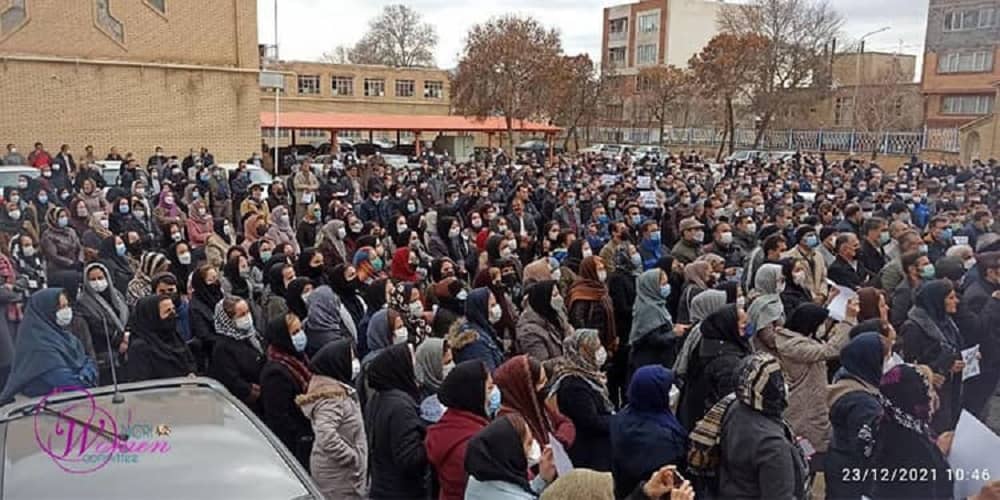 Iranian teachers’ rights have been systematically violated during the 42 years of the mullahs’ rule, and their demands have not been considered in next year’s budget. They constitute a growing presence in Iranian politics and society and have consistently led protests against the clerical regime in recent years. A teachers’ strike and call for justice emerged after another nationwide strike by truck drivers, continuing an uprising that began in January 2017.

Three-day protest and its context

Teachers in Iran staged a nationwide protest last week for three days. The Coordinating Council of Iranian Cultural Associations called on all teachers to protest and voice their demands. A strike was held on December 11 and 12. But on December 13, it turned into a protest rally, with active teachers joined by retirees. The protests spread across more than 200 districts and cities across Iran, with teachers looking beyond their own grievances to highlight the pain felt by all sectors of Iranian society. As they had done with farmer’s protests in Isfahan the previous month, security forces attacked the teachers’ protest on its third day, fearing its continued growth. Protestors chanted to condemn the regime’s response as “shameless” while authorities outside of the parliament building beat and temporarily detained several teachers’ representatives, including Rasoul Badaghi, the inspector of the teachers’ union, and threatened to fire others. Fearing a backlash over Badaghi’s arrest, however, the authorities were forced to release him on bound a few days later.

Due to the dire economic and livelihood situation, which is especially evident in the high prices of goods and inflation, the Iranian teachers are in a difficult living situation. Their government salaries are typically below the poverty line, as defined by the same government, and they have been protesting for a long time to fulfill their demands. The government both ignores these demands and subjects teachers to repression, arrests, and intimidation. However, the brave teachers have not given up on requests such as the ranking scheme, the law on equalization of pensions, the implementation of free education and the release of imprisoned teachers.

Iranian media recently reported: “According to the teacher ranking bill passed by the parliament’s education commission, teachers’ salaries should reach at least 80% of university faculty members’, but Iranian officials say there is not enough funding to implement such a bill.”

On December 15th, after a nationwide teachers’ demonstration, the regime’s parliament finally, after a 10-year delay in not paying the amount, categorized teachers and increased their salaries by a small percentage. But due to inflation, that salary remains below the poverty line.

In the budget for the Iranian year 1401, the government of President Ebrahim Raisi has increased the IRGC budget by over 900 trillion dollars. That is a 240% increase over the previous year. In addition, about one billion euros has been allocated to the IRGC alone for terrorist and missile export projects and the like. Meanwhile, the budget for education increased 14% or 1,300 trillion rials. Yet the deficit of teachers’ and retirees’ payments for this year and last year is still 20 to 30% of the education budget. Thus, it is clear that teachers and education are very low priorities for the clerical regime’s budget.

Iranians have not forgotten that two years ago, on the day Qassem Soleimani was killed, Khamenei paid 200 million euros (nearly 50 trillion rials) to his mercenaries in the terrorist Quds Force to keep their spirits up. This only reinforced questions about how the regime can spend money for its mercenaries in Yemen, Syria, Lebanon, and Iraq, and liberally increase the budget for repressive forces, yet lack room in the budget for raising teachers’ minimum salaries?

The Teachers Trade Union Coordination Council issued a statement in protest of the incomplete ranking rating of the parliament and the government’s opposition to the implementation of the rating, noting: “The parliament did not pay attention to the teachers’ protests in its resolution. The Union also considered the incomplete approval of the ranking plan to be a mocking to the teachers.”

With their courageous protests today, Iranian teachers showed that they will not back down despite the clerical regime’s deceptive plans, threats, & suppressive measures. The teachers’ movement will carry on until their demands are met. #IranProtests pic.twitter.com/OB4i7VlTP6

The Council protested the parliament and the government, declaring that the imposed resolution was not acceptable to the teachers, and warned the government and parliament not to oppose the will and rights of teachers. The council re-emphasized teachers’ requests and demands, and also stated that it will strongly pursue the full ranking and equalization of the salaries of retirees and employees, as well as the release of imprisoned teachers.

Following the call by the council for a nationwide rally in Tehran and other cities and provincial capitals on Thursday, December 23rd, tens of thousands of teachers answered the call, as protests took shape in more than 100 cities nationwide. The protests were held even though in the days prior, officials and the security forces had summoned many of the protest leaders or had sent SMS messages to the teachers, warning them of the consequences. In Tehran, the regime tried to disperse the teachers as they exited the metro stations, but they gathered after leaving the stations. Thousands gathered outside the Planning and Budget Organization and chanted, “free all imprisoned teachers,” “free all political prisoners.” In Shiraz, the capital of the southern Fars Province, thousands of teachers defied the heavy presence of the security forces and called them “shameless.” In the northeastern city of Mashhad, Iran’s second largest city, the security forces attempted to disperse the protesting teachers by using pepper spray.

Mrs. Maryam Rajavi, the President-elect of the National Council of Resistance of Iran (NCRI), lauded the protesting teachers, adding, “With their courageous protests today, Iranian teachers showed that they will not back down despite the clerical regime’s deceptive plans, threats, and suppressive measures. The teachers’ movement will carry on until their demands are met.”

Previous articleIran: Teachers Hold Protests in more than 60 Cities
Next articleIRAN: Teachers Rise up in More Than 100 Cities Nationwide