NCRI – A group of telecommunication industry personnel in the province of Lorestan, western Iran, gathered outside the governorate on Monday, June 6, to protest non-payment of their deferred salaries and benefits as well as non-implementation of a new job classification scheme.

“We protest against the postponement of our salaries in this recession, and more importantly, non-implementation of the legislation regarding job classification in Lorestan’s telecommunication sector,” one of the protesters said, according to the state-run Tabnak News Agency in Lorestan Province. 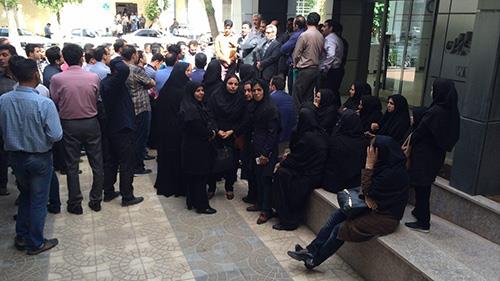 Another protester said: “It is necessary and appropriate that the governor of the city take action to solve the problems of the personnel’s salaries and benefits as well as implementation of the job classification scheme in order to motivate and encourage the Telecommunication staff to provide optimal service to citizens.” 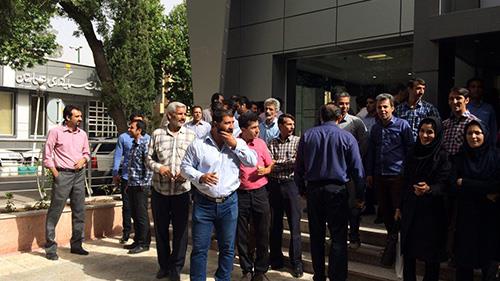 Also on Monday, the state-run ILNA news agency reported that a protest gathering of the retired workers of Iran’s Telecommunication Industry (ITI) in Shiraz, southern Iran, still continues. On Sunday night, the retired workers gathered in the courtyard of this industry and called for the presence of their trusted representatives at the meeting of the Labor Commission in Fars Province on Monday.

According to ILNA, one of the retired workers said: “The Labor Commission in Fars Province is going to have a meeting to address the problems of 300 retired workers of this factory. The demonstrators are demanding their guild representatives be allowed to attend this meeting.”

“What exacerbated the concerns of the workers who participated in last night’s gathering is that the meeting may be held without the participation of workers’ representatives,” he added.

The retired worker continued: “In the past, neither the authorities nor the administrators of the retired and employed workers’ guild unions in Fars Province were able to give specific answer to my colleagues and I about the fate of our outstanding claims.”

The retired ITI workers have been rallying continuously since May 24, demanding receipt of their unpaid wages.

Retired workers have said that the employer claims that lack of financial resources is the reason for failing to fulfill their legal obligations regarding the outstanding and unpaid wages, but the workers are tired of this situation and have vowed to continue their gatherings until their demands are met.