Iran: The People Believe the Theocratic System Is To Blame for Their Hardship 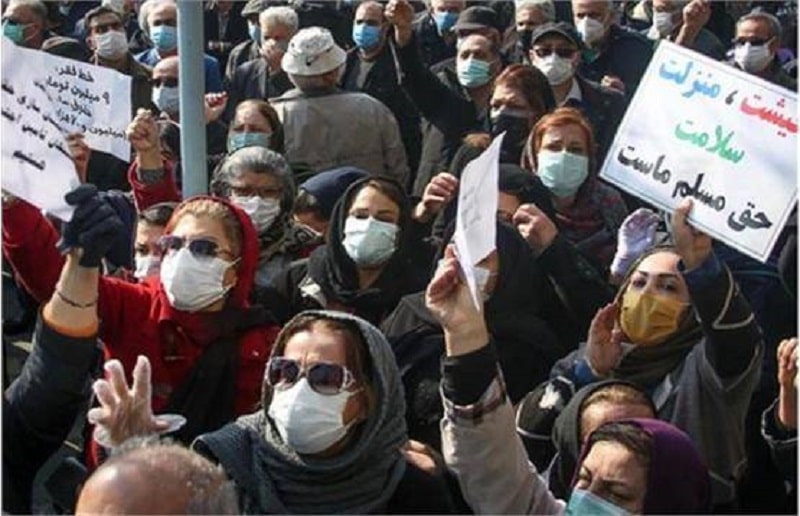 When Iran marks its New Year celebration, Nowruz, this weekend, it will no doubt still be reeling from a number of unresolved crises. The coronavirus pandemic is still raging throughout the country, exacerbated by an edict from the regime’s Supreme Leader Ali Khamenei banning the import of efficacious vaccines manufactured in the US and the UK. And although fears of even more widespread infection have helped to shrink the scale of domestic unrest over the past year, there are signs that the Iranian people are at a breaking point which could give rise to the next great uprising, and perhaps to the long-sought overthrow of the clerical dictatorship.

Earlier this month, the Iranian Resistance President-elect, Mrs. Maryam Rajavi gave the keynote address in a virtual conference organized by the National Council of Resistance of Iran (NCRI), on the occasion of International Women’s Day. In it, she emphasized the prominent role that Iranian women have played in the country’s pro-democracy protest movement, and in clashes with authorities like those that were taking place at the time in the southeastern-most province of Sistan and Baluchistan.

There, impoverished fuel porters had staged initial protests over the Revolutionary Guards (IRGC) interference with their necessary livelihood. When the demonstrations met with gunfire and several porters were killed, locals rose up in their defense, setting fire to government building. The IRGC and regional security forces attack the defenseless protesters killing and injuring dozens. This uprising was a testament to numerous longstanding trends that underpin public resentment of the regime, including deliberate neglect of marginalized communities, curtailment of free speech, and reflexive violence in the face of all challenges.

The uprising in Sistan and Baluchistan was unmistakable evidence that anti-regime sentiment had not diminished in the wake of the coronavirus outbreak, but could still find outlet in large-scale protests and the crisis winds down in most of the world. That sentiment had reached a sort of crescendo in the two years leading up to the pandemic. In December 2017, a protest was organized in Iran’s second largest city of Mashhad to call attention to worsening economic conditions, but the regime was soon taken aback when the public activism spread to other cities, taking on an ever-farther-reaching political message along the way.

By mid-January, the anti-regime uprising had encompassed well over 100 cities and towns, wherein participants were chanting slogans like “death to the dictator” and condemning both the “hardliner” and the so-called “reformist” factions of the regime, thereby making it clear that their goal was to instantiate an entirely new system, with leadership unaffiliated to the existing regime. The prospective nature of that leadership was already well-known to many who were active in the Iranian activist community, but it became clear to all while the uprising was in full swing, as Supreme Leader Ali Khamenei begrudgingly named the NCRI’s main constituent group, the People’s Mojahedin Organization of Iran (PMOI/MEK), as a major driving force behind the protests.

The MEK and NCRI are the leading advocates for regime change in Iran and as the most serious political challenge to the theocratic system. NCRI’s president-elect, Mrs. Rajavi, has put forward a 10-point plan for the country’s future, which outlines a system of free and fair elections, legal safeguards on the rights of women and minorities, and separation of religion from the state – all things that are categorically denied to the Iranian people by the ruling mullahs. The appeal of that plan is obvious, and was made more so during the 2018 uprising, when huge swaths of the Iranian population, representing all walks of life, took to the streets in support of a movement that was recognizably led by MEK “Resistance Units.”

Public endorsement of the pro-democracy opposition was underscored later in the year when activists throughout the country responded earnestly to Mrs. Rajavi’s call for a “year full of uprisings.” Her speech on the subject coincided with Nowruz and the start of the year 1398 on the Persian calendar. Now Iran stands on the brink of the milestone that is the year 1400, and the people are surely impatient for the change they have been pursuing constantly for over three years, through the January protests and the subsequent year of scattered, local “uprisings,” and through another, even larger nationwide protest in November 2019.

That latter uprising lasted less than two weeks before the death toll mounted to 1,500 in the wake of the IRGC opening fire on crowds of protests all across the country. But even this failed to bring the restive population to heel for long. The following January, the regime made a fumbling attempt to cover up the IRGC’s responsibility for a missile strike that brought down a commercial airliner near Tehran, and residents of more than a dozen provinces took to the streets once again, defying the implicit threat of unutterably brutal reprisals.

Mrs. Rajavi mentioned this in her Women’s Day speech, putting it in context with persistent demands for change, which survived the ensuing coronavirus outbreak and now seem ready to emerge on the other side with even more reasons to push for the overthrow of the clerical regime. “What happened in Saravan and other cities of Baluchistan, was not an abrupt upsurge, but the continuation of the volcanic eruptions in November 2019 and January 2020,” the NCRI president-elect said.

If there is only one common thread running through all of these protest movements, it is the tendency of participants to hold the entire regime – the very system of government – accountable for whatever particular hardship was under the spotlight. The neglect for marginalized communities like the Baluch in southeastern Iran is a baked-in feature of the religious dictatorship. Economic mismanagement is an indelible part of the corruption that has always pervaded that regime. That same self-serving impulse makes it impossible for the Iranian people escape the coronavirus pandemic under the leadership of those who would sooner ban the distribution of vaccines than compromise their malign priorities.

Faced with unrest over each of these issues, the regime has attempted to regain control both through brutal repression and misdirection, often attempting to blame the US and its allies for the people’s hardship. But Iranians have consistently overcome the former tactic while categorically rejecting the latter. Among the chants that have grown especially familiar in recent years is one that says of the mullahs, “The enemy is here, but they lie and say it is America.”

Western policymakers should pay attention to the full range of sentiment coming from the Iranian people, but to that especially. The public refuses to be duped into believing that anything other than the theocratic system is to blame for their hardship. The western leaders must not be duped into believing that they need to relinquish pressure on the regime in order to stave off the Iranian people’s resentment. As Iranians look forward to the promise of a new year, the international community should help them to realize that potential by recognizing their right and their relentless fight against the clerical regime.