IRAN: Victims of a housing cooperative scam protested in front of regime’s Parliament 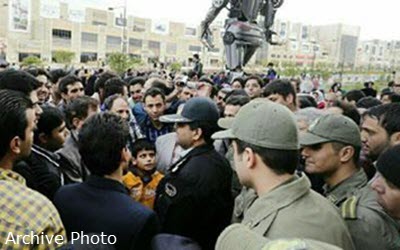 NCRI – The victims of Negin-E-Gharb housing cooperative scam protested in front of the regime’s parliament building in Tehran on Tuesday, June 14.

They protested against the fraud committed by the company that have not delivered the apartments of Vardavard in the Iranian capital in the past 16 years.

One of the protesters said: “We purchased these flats in 2000 and since then, the flats have not yet been delivered and the money has not been returned to the buyers.”

Thousands have fallen victim to this scam by a company closely associated with officials of the mullahs’ regime.

More than 1000 victims of major financial scams by state-affiliated companies in Iran held a protest last month in Mashhad, Iran’s second largest city, demanding their rights, according to eye-witness accounts.

The protesters, including victims of the Padideh Shandiz investment scam, demanded that their plundered money be returned, saying that the officials in the companies involved enjoy the support of the mullahs’ judicial and intelligence apparatus.