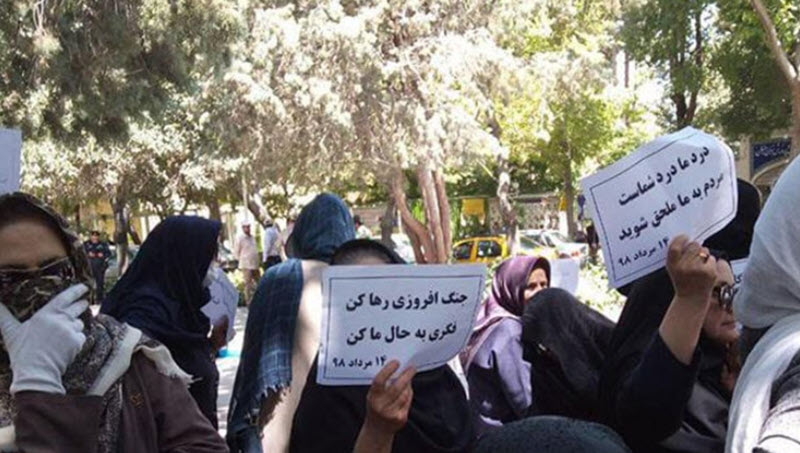 Contract teachers in Iran held protests on Sunday and Monday, August 4-5, in front of the Ministry of Education in Tehran in protest to the non-implementation of the law to officially employ them as full-time staff. They chanted: “I’m not leaving until I get my rights.”

The anti-regime protest on Sunday was more than 1000-people strong and included contract teachers from all across Iran.

On Monday, their protest spread from Tehran to other cities including Ahvaz, Isfahan, Tabriz, and Kermanshah. Employed and retired teachers took part in those rallies.

In Ahvaz the protest took place in front of the Khuzestan Education Department on Monday. The protesters held banners which read: “We Iranians have not chosen the hard life and to live under the poverty line. You [the regime] have imposed a miserable and stressful life on the Iranian people.” They also held up signs that read: “Raise teacher salaries above the poverty line,” “Our nation demands an end to corruption and abjection” and “Imprisoned teacher must be freed.”

Also on Sunday, August 4, a group of preschool teachers in Khuzestan Province gathered in front of the Education Department in Ahvaz to protest against their employment status. (The state-run ILNA News Agency – August 4, 2019)

In Tabriz, employed and retired educators protested against the lack of response to their demands in front of the Education Department on Monday, August 5. They held banners that read: “The teacher’s place is not in prison” and “We want an increase in teachers’ salaries.”

On the same day in Isfahan, dozens of employed and retired teachers gathered in front of the Education Department as law enforcement and plainclothes agents exceeded the number of protesters, and the regime intended to prevent the spread of the protest and more people joining at any cost. They did not allow anyone to take photographs or videos of the protest. The regime’s police officers pushed the protesting women and arrested those holding their phones. The agents attacked anyone who tried to shout slogans and prevented the protesters from chanting.

One of the protesters said, “As soon as we distributed our protest banners among the demonstrators, agents rushed in and tried to stop the rally. They were dispersing the crowd.”

On the same day, a group of educators in Kermanshah gathered in front of the province’s Education Department building. They chanted “Imprisoned teachers must be freed” and “No nation has witnessed this much injustice.”

On Monday, August 5, the defrauded clients of the Caspian Credit Institution protested in front of the Judiciary building in Tehran.

On the same day, the defrauded buyers of the Pars Khodro Company staged a protest in front of the building of the Criminal Court in Tehran. (The state-run Tasnim News Agency – August 5, 2019)