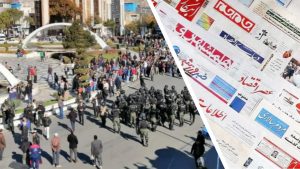 On Sunday, Iran’s state-run media and the regime’s officials acknowledged the country has an economic crisis, and the mullahs are the real reason for this crisis.

“Unfortunately, Iran’s economy has condensed and unresolved structural challenges, and the Covid-19 challenge is now added to this collection. Iran’s economic infrastructure is more damaged in recent years. We will witness a deepening recession in key sectors of the Iranian economy in the [Persian New year of] 1400,” Vahid Shaghaghi, one of the regime’s economists, told the state-run Khabarfori website on Sunday.

One of Iran’s super economic challenges is the rising inflation rate, liquidity growths, and skyrocketing prices. While many of the mullahs’ apologists try to blame sanctions, state-run media acknowledged how the regime’s wrong economic policies had devastated Iran’s economy.

One of these wrong policies is banknote printing. Hassan Rouhani’s government has increased banknote printing to compensate for its budget deficit without considering its devastating impact on people’s lives.

“The [regime’s] economic policy case was closed last year with two major developments. The first was the government’s withdrawing money from the Central Bank’s resources in the second half of the year. The second was the confession of the Governor of the Central Bank of Iran (CBI) to banknote printing and selling foreign currency from the National Development Fund. Both policies have been adopted to compensate for the budget deficit. Thus, the government’s financial indiscipline, the dominance of fiscal policies over monetary policy, and the lack of central bank independence can be cited as the main reasons for the growth of the monetary base and the increase in liquidity in the last year. If liquidity continues to grow disproportionately to real economic growth, inflation will be higher than the average of previous decades,” wrote the state-run Jahan-e Sanat on Sunday.

“Considering the factors that led to an increase in liquidity and rising inflation last year, it can be predicted that insecurity in the economic situation and the skyrocketing prices of the basic goods will be the people’s guests this year,” Jahan-e Sanat adds.

“Some officials say that the liquidity growth, once the printed banknote has reached the producer and is spent, does not pose a risk to the economy and will no longer lead to inflation, but will also control it. But economics tells us that creating liquidity in any situation will lead to higher prices,” wrote the state-run Eghtesad-e Meli daily on April 4, 2021.

With the growing economic crisis, the regime’s officials warn one another of an inevitable uprising.

During the public session of the regime’s Parliament on Sunday, many of the regime’s MPs expressed concern about people’s reaction to the ongoing economic and social crisis.
“People’s tables continue to shrink daily. If we do not find a solution, great damage will await us. The feeling of oppression among the people who lost their [life savings in] stock market, [people’s anger of] incidents, [such as] the fuel-price hike incident [November 2019 uprising], the rampant inflation, the long ques for oil and poultry, cannot be ignored. People will react at the right time,” said Ahmad Alireza Beigy, one of the regime’s MPs, on Sunday.