Khomeini’s Successors Can No Longer Preserve His “Sacred” Regime 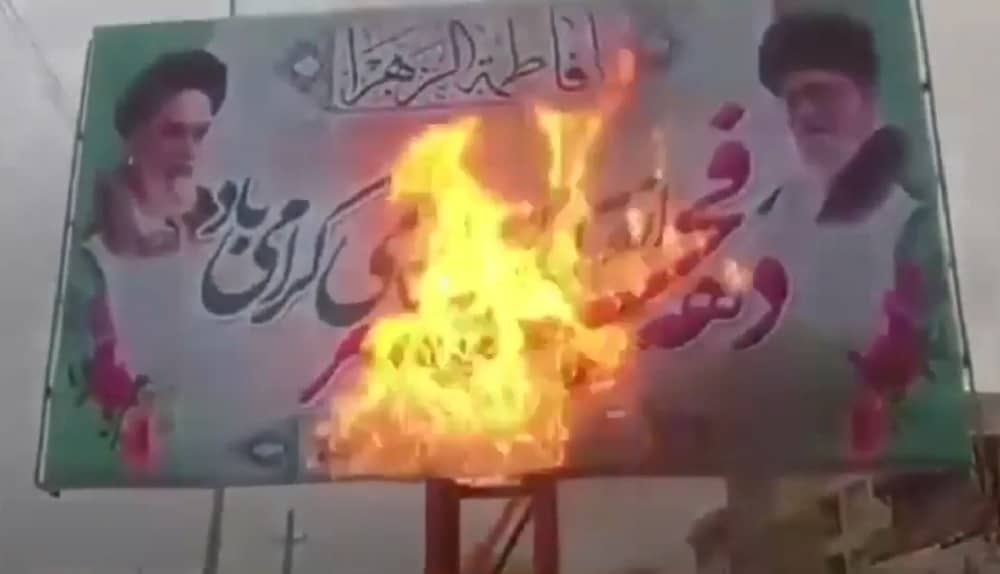 Friday, June 3, marked the death anniversary of the Iranian regime’s founder Ruhollah Khomeini. The current volatile society, put on display by daily protests and uprisings, as well as the regime’s desperate security maneuvering and political blame game, indicate that Khomeini’s successors can no longer hold his regime together.

Khomeini, who came to power as a “holy man” with the mantra of “coming altogether,” soon showed its true colors and is now condemned as one of the 20th century’s most vicious dictators. Khomeini’s famous saying was, “Preserving the sacred state is of utmost priority,” and he did not shy away from taking extreme measures to achieve the objective.

From prolonging an unpatriotic and devastating war with Iraq to sending tens of thousands of young Iranians to the gallows, stifling any voice of dissent, oppressing freedom of the press, and institutionalizing misogyny, Khomeini did everything to impose his medievalist regime on Iran’s vibrant society.

Today, four decades of corruption, misogyny, oppression, ineptitude, and mismanagement have turned the society into a powder keg, and considering that Khomeini’s death anniversary was meant to be a “unifying event,” state officials can hardly stop laying bare their paranoia, complaining about the status quo, and blaming each other for it.

Remarks by state officials, particularly by the regime’s Supreme Leader himself, clarified why the ruling factions are increasingly at loggerheads.

“The enemies have pinned their hopes on popular protests to damage the country,” Khamenei said in his speech on June 4. “They are trying all kinds of tricks to turn the people against the Islamic Republic, including, psychological work on the people, activities on the Internet, spending money, and hiring mercenaries.”

“The enemy counts primarily on protests and the current social situation. It aims to organize and expand these protests. The enemy tries to use social media to tarnish the image of the Islamic Republic. Unfortunately, the enemy’s media is not only disturbing but has a lasting effect on our youth,”  Intelligence Minister Esmail Khatib acknowledged on Jun 5, as quoted by the state-run Entekhab website.

“The enemy attempts to tarnish the image of the Islamic Republic by using social media. Even if the state serves the people or science, they reverse-talk the achievement,” Mohammad Hassan Raji, a state-affiliated missionary in Bojnourd said on June 3.

Referring to widespread disgust towards Khomeini’s fundamentalist doctrines in society, Hossain Hamedani, Friday Prayer leader of Karaj acknowledged: “Unfortunately, some people believe that if we speak about Imam Khomeini and promote his beliefs, there would be more defection within our ranks, so we should avoid talking about Imam and his ideas.”

“The hypocrites (the pejorative term used by the regime to disparage the MEK) have worked for a long time to tarnish the image of Khomeini. They have a major operation to exclude Imam from the 1979 revolution,” Hossein Khorasani Motlagh, IRGC’s commander in South Khorasan, said at a state rally in Birjand on June 4.

“As the Supreme Leader mentioned today, the current social situation prompts some enemies, like the hypocrites (MEK), to closely monitor people’s decisions and try to influence them. The enemy thinks it can fish in the muddy waters,” Reza Noury, the Supreme Leader’s representative in North Khorasan province admitted, as quoted by Fars news agency on June 4.

Unlike many official statements, these remarks were deliberately timed for the occasion. The rhetoric came a day after the Resistance Units, a network affiliated with Iran’s leading opposition group, Mujahedin-e Khalq (MEK/PMOI), launched major and simultaneous operations, taking down Tehran Municipality’s IT Center on June 2. According to the MEK, the Resistance Units “took down over 5,000 security cameras belonging to the Tehran Municipality and defaced many of its websites.”

Terrified of its security being compromised and the outbreak of popular protests, this year, the regime changed its approach. The very fact that the organized opposition can strike when and where it plans to, was taken seriously in Tehran.

Unlike previous years when the regime mobilized Basij members and forced students, government employees, conscripts, and their families to participate in such organized parades to put a hollow show of popular support, this year, it invoked strict health and safety measures, which spoke volumes about the regime’s concerns.

Despite the official claim that the Covid-19 virus deaths have dropped to zero, the government announced that all participants in the anniversary should have been vaccinated three times and provided a vaccine card. According to the state-run ISNA news agency, a special task force that included the police, the Basij, and a 20,000-strong Revolutionary Guard force was tasked with the security of Khomeini’s tomb and surrounding areas.

The regime officials’ bogus claims of victory amid ongoing protests and the Iranian Resistance’s operations resemble a knocked-out boxer, trying to stand tall at any cost. Khamenei’s paradoxical remark about his regime’s deadlock tells it all. Thirty-three years after Khomeini’s death, his successor desperately looks for any port in a storm to save the regime.  “Prevent [the enemy] from implying the system is in a deadlock. No, we will not reach a dead-end!” he said.