More protests over water shortages break out in Iran 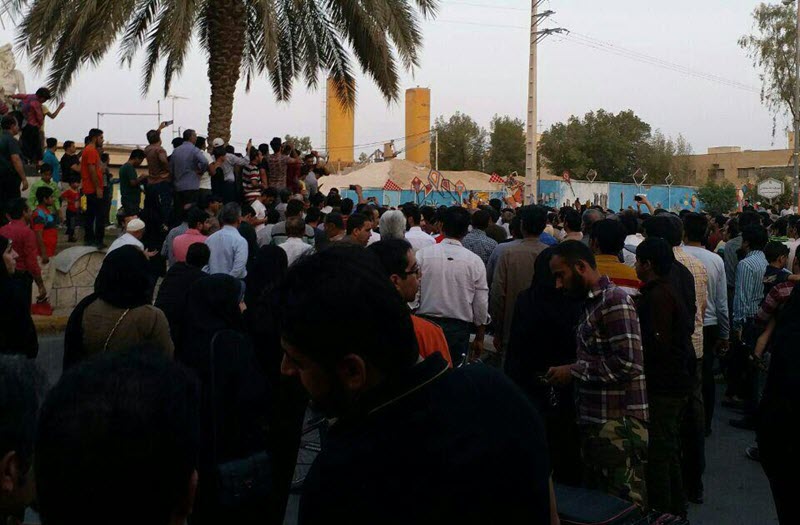 Thousands of residents of people in Borazjan, southern Iran, took to the streets on Saturday to protest the severe water shortage and the Regime’s “chaotic” handling of the issue, after spending days without water.

The protesters, who assembled in the city’s main square, chanted slogans against the local authorities and demanded that the Governor come forward to solve the problem.

The protesters chanted: “Either the Governor steps in, or we are going to raise Hell!”

The governor’s deputy and the city’s Friday Prayer Leader Hassan Mosleh tried to deliver a speech to the people, but the angry protesters caused them to turn back, despite the presence of hundreds of security forces, according to footage circulated on social media.

The demonstrators remained in the square for four hours, chanting about the “inefficiency” and “incompetence” of the local authorities, as well as decrying false myths by the Iranian Regime about who is to blame for the Iranian people ’s woes.

They said: “Our enemy is right here, it is not America as they [the Islamic Republic’s authorities] falsely say.”

Mohammad Baqir Sa’adat, an Iran regime MP for Borazjan told the city’s website, Fikr-e Shahr (City’s Thought) that the Regime’s handling of the crisis was incompetent.
He said: “People’s anger is justified. They are even entitled to insult the authorities.”

He then went on to explain why the water shortage, which has caused water to be cut off in the city for 10 days during 50 degrees Celsius heat, had happened.

He said: “The main reasons behind the water shortage are more than thirty powerful pumps installed by the owners of several orchards (affiliates to the regime) in the neighbouring city of Kazeroon on the local river for illegal irrigation of their properties during dark hours of the night. The governor of Kazeroon, originally from the city’s suburbs, has so far ignored an official verdict for dismantling the powerful pumps.”

These demonstrations mirror rallies in Abadan and Khorramshahr, where 10 people were arrested and 25 charged with “calling people to sedition” and “abusing popular demands”.

Many people in cities and rural areas of Iran have taken to the streets to protest the water shortages over the last few months. The water shortages were caused by drought, which affects over 95% of Iran, but were exacerbated by the Regime’s corruption and mismanagement.

This is part of the nationwide anti-regime uprising that has taken over Iran since December, with people protesting all manner of issues from human rights abuses to the failing economy, but all protesters recognise that the Regime is responsible for all of the problems in Iran. These protests are being organised by the Iranian Resistance, who seek to remove the mullahs from power.

Previous articleIran: Uprising of Brave People and Youths of Borazjan Chanting “Death to the Dictator”
Next articleIran regime’s attacks on US ships in the Persian Gulf has halted