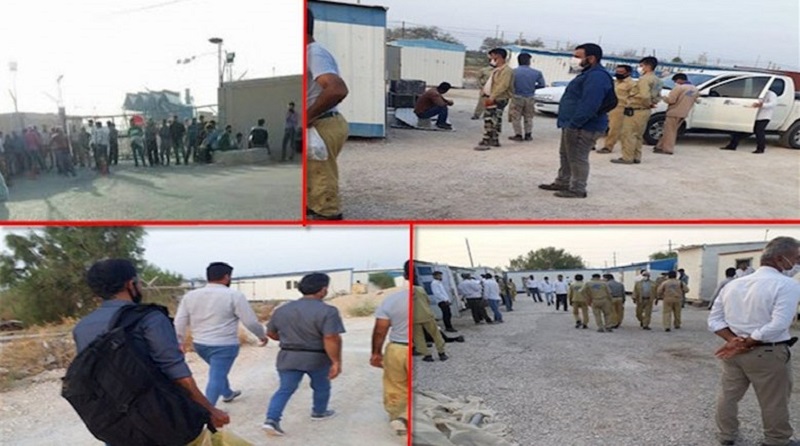 Oil workers in several oil-rich provinces of Iran on Wednesday are on strike for a 14th consecutive day. Amid international sanctions and a restive society, the oil workers’ strike is a heavy blow to the Iranian regime and its oil-dependent economy.

The striking workers and employees in 20 cities in 12 provinces went on strike since they are suffering from intolerable working conditions in extreme heat and exceedingly difficult living conditions. They also lack job security and insurance since they were forced to sign temporary contracts.

Many of these workers have been victims of the regime’s so-called “privatization policy” which is nothing but handing these companies to the Revolutionary Guards (IRGC) and its affiliates to further plunder the national wealth for funding terrorism. In 2009, the regime handed petrochemical refineries and some oil refineries to some of these so-called “private companies” which are affiliated with the IRGC. Bakhtar refinery near Abadan, in Khuzestan province, southwestern Iran, is an example of how the regime’s corruption is affecting workers’ life. Jalal Mahmoud Zadeh, one of the regime’s former Members of Parliament, in September 2019, told the state-run Danesh-e Naft, that the real price of the Bakhtar petrochemical refinery real value was “40 trillion rials but was sold at 1.3 trillion rials.”

The Iranian regime has been trying to end the oil workers’ strike by giving them hollow promises or even threatening them. But workers have not succumbed to the regime’s demands. This ongoing strike has very much terrified the mullahs’ regime. In this regard, the state-run Fara website wrote: “The oil workers’ protest is very important, and it could increase labor protests. Meanwhile, neither the Ministry of Oil nor any other official have addressed this issue.”

The Iranian regime’s Vice President, Eshagh Jahangiri, had recently acknowledged the sharp drop of the regime’s oil revenue. “We had $100 billion oil revenues. But our total oil revenue last year was around $8 billion. This decrease of revenue has had an impact on all parts, including the government’s budget,” he said.   Since the regime has used oil and gas revenues to fund its proxy terrorist groups, this sharp increase of oil and gas revenue, along with the oil workers’ strike, will have a direct effect on the regime’s warmongering policies.

Hassan Nasrallah, head of the Lebanese Hezbollah terrorist group, once said: “Brothers, we are not ashamed to say that Hezbollah’s budget, expenses, food, and weapons come from the Islamic Republic of Iran. As long as Iran has money, we have money. Do you want more transparency?”

Now what would Hezbollah and other terrorist groups do when the regime loses its oil revenue?

Since domestic oppression and export of terrorism abroad are the regime’s two pillars of existence, the mullahs will further plunder people and take wrong policies to compensate their budget deficit.

Recently the regime’s president Hassan Rouhani announced a plan signed by the mullahs’ Supreme Leader Ali Khamenei to further plunder people: Selling oil to the Iranian people. “The government wants to pre-sell 220 million barrels of oil in one year in the form of the supply of ‘parallel oil futures’ whose price is determined based on the government official exchange rate system. This figure is equivalent to 600,000 barrels per day of sales in a year and about six times the amount of Iranian oil sales in the first five months of this year,” wrote the state-run Donya-e Eghtesad website in this regard.

#Iran Regime to Sell Oil to People: A Deceptive Action to Further Plunder the Nation
No Sino-deal, Euro-trade, or US-bargain can save the ruined economy that is designed only for enriching the few ruling mullahs. The only elixir is regime change #NCRIhttps://t.co/4QUwyYOKC9

But this decision and the oil workers’ strike will have severe consequences for the regime, amid the regime’s international and domestic crisis, such as international sanctions, protests in Lebanon and Iraq against the regime and its proxy groups and the restive Iranian society that once showed its willingness for regime change in November 2019.

As Ahmad Tavakoli, a former Member of Parliament, said: “This is to overthrow the country into the valley of misery. If overthrowing the country in a few years to compensate for the lack of work, convenience, and corruption is economic relief, then what is misery? If we do not do something and continue like this, the fall is imminent.”

For this reason, the regime has been trying to end the oil workers’ strike and release its neck from the tightening noose of crisis. Even if the regime oppresses these workers, due to the current explosive situation of Iranian society, the mullahs will not be able to silence the society.

Yet, it is necessary for the world community to stand with poor Iranian workers and their righteous demands.

In this regard, Mrs. Maryam Rajavi, the President-elect of the National Council of Resistance of Iran (NCRI), hailed the striking workers and employees who have risen up for their essential rights for the past ten days. She called on the public, especially the youth, to rise up in their support. Mrs. Rajavi urged the International Labor Organization and trade unions to condemn the clerical regime’s anti-labor policies and to support the Iranian workers’ protests and strikes.

I urge the International Labor Organization and trade unions to condemn the clerical regime's anti-labor policies and to support the Iranian workers' protests and strikes. #Iranprotestshttps://t.co/xrUyFMa2Gz