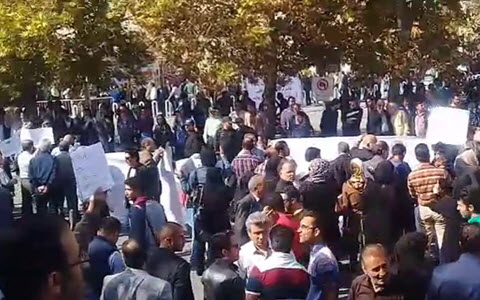 NCRI – It is virtually one year that almost on daily basis, we are witnessing demonstrations and protest gathering of thousands of Iranian people in various cities across Iran, against state affiliated financial institutions who have plundered them. The following article is a well-documented research by Alliance for Public Awareness (APA-ICE) about this issue.

Towards the end of 2016 and beginning of 2017, a new phenomenon emerged in Iran, called “the plundered” which is in reference to people who had lost their savings in authorized financial institutions. More and more people have lost their money through such firms. According to a member of the regime’s parliament, more than 2,000,000 individuals have deposited over 160,000 billion Rials (3.8 billion Euros) at the Caspian Credit Firm. The institute is said to be affiliated with the Islamic Revolutionary Guard Corps (IRGC).
The MP for Zanjan, Ali Vaghfchi, revealed that the first time he met with the President of the Central Bank, Mr. Seif, he denied having issued a license for Caspian Credit Institution. But verified documents subsequently disproved this denial. Furthermore, the license is posted on the Central Bank website.
Formation of not-for-profit financial firms in Iran goes back more than 50 years. Though there were few of them before the fall of the shah, these firms started to grow rapidly thereafter, from 350 in 1981 to 6,000 in 1991.
These firms have been operating for years without being audited by either government or any independent body. In absence of the rule of law or any kind of accountability, the main objective of these firms has been to plunder people’s wealth. Some have also been sued for “money laundering.”
For over a year, more than 100 cities around Iran including Tehran, Mashhad, Ahvaz, Zahedan, Ardebil, Rasht, Kerman, Karaj, Kermanshah, Yazd and Khorramabad, among others, have been the scene of demonstrations by ordinary Iranians who have lost their life savings. This is merely the tip of an iceberg of the enormous economic crisis brewing in Iran.
Two Examples
1- Caspian Credit Institute
Caspian is reported to be affiliated to IRGC and was formed in February 2016 by merging eight co-operatives, namely Fereshtegan, Mashhad’s Al-Zahra, Isfahan’s Hasanat, Kermanshah’s Damdaran &Keshavarzan, Mashhad’s Badr-Toos, Payvand, Gorgan’s AmirJalin, and Mazandaran’s Keshavarzan, thus taking on all the accounts and commitments of its bankrupt subsidiaries after getting the Central Bank’s permit. Investors had already placed around 1.7 billion Euros in eight trade institutions prior to their closure, prior to the formation of Caspian in 2016.4 Four hundred and fifty thousand people who have invested their savings in the Fereshtegan Credit Firm, linked to Caspian, are now complaining that a total of 1.19 billion Euros of their savings has vanished. This is just one of numerous dodgy businesses with links to the IRGC and Khamenei’s office which have been able to get their permits from the Central Bank.
2- Mizan Credit and Financial Institute
Mizan was one of the most famous, largest unauthorized financial, and credit institutions, which initially emerged as a cooperative fund owned by pensioners and employees of the judiciary branch in Khorasan Razavi province. Over the course of its twelve years of existence.
it opened more than 80 branches mainly The writing on Persian banner: Trusting the Central Bank is equal to losing your life saving focused on the 3 provinces of Razavi, South Khorasan and North Khorasan.
In 2005, it received a conditional license to become a non-bank credit institution, and in 2010, when it met the financial preconditions, it received a permanent license from the Central Bank of Iran (CBI).
Total deposits in Mizan amounted to about 4,500 billion rials (108 billion Euros) in North Khorasan province, which covered 80,000 depositors.
In 2013, after extending a 3.25 trillion rial (85 million Euros) loan to the Padideh Shandiz Company, Mizan declared itself bankrupt. The announcement led to massive protests in Mashhad and other cities in Razavi Khorasan province.

Finally, in May 2015, the government and the CBI agreed to dissolve Mizan and to transfer its remaining assets and liabilities to Bank Saderat7. In the meantime, Padideh Shandiz also declared bankruptcy and has proven to be a massive embezzlement scheme involving 94 trillion rials (2.45 billion Euros). Investors have had no answer from Bank Saderat, and the issue has not been resolved. Assigning other banks to solve similar problems seems to be a tactic used by CBI to avoid taking any responsibility itself.

Corruption is so widespread that even government officials acknowledge it. Earlier this year, Hatami Yazdi, one of the regime’s financial experts, said in response to massive protests by “the plundered”: “Those who launched these institutions had political power and special backing and hence they could circumvent the law.”

Hatami Yazdi added: “All these institutions were established with improper political support, and they will continue to live with the same support”.

During the 2017 Iranian presidential campaign, Ebrahim Raisi was the preferred candidate of Supreme Leader Khamenei. Raisi is the head of Astan quds Razavi, Iran’s largest endowment, and he said in a television debate that Khamenei had explicitly allowed this endowment to avoid paying any taxes.
Rouhani blames protesting investors, saying central bank cannot provide money for earthquake relief

In a meeting between the head of Iran’s three branches, President Hassan Rouhani, accompanied by Parliament Speaker Ali Larijani and judiciary chief Sadeq Larijani, had the audacity to blame protesting investors who have lost their entire savings to state-run financial institutions.

“The people should be careful and place their money in banks and institutions that are well known and trusted, and doubt those entities that promise high profits,” Rouhani said on Saturday, November 11.
“The Central Bank has its limitations, too, and one cannot use the Central Bank’s for such purposes,” he added. Rouhani’s comments come after a year of hallow promises.

Rouhani’s audacious remarks were made at a time when the regime’s own officials and staterun media claim the people’s money had been plundered by more than 5,000 economic institutions that are owned by the IRGC, the paramilitary Bassij, police and other entities, all of which authorized by the Central Bank, which is controlled by Rouhani himself. These institutions control 10 to 25 percent of the country’s liquidity.

Corruption is endemic to this regime. Meanwhile, it is incapable of solving any economic or social problems and must pursue its expansionist ideology throughout the world, for the sake of its own survival.

The regime has received billions of dollars from the Obama administration following the signing of the nuclear agreement. The mullahs have gone on to boost their ballistic missile program in violation of UN Security Council resolutions, to prop up the Assad regime in Syria and its continuous killings of innocent people, and to escalate their lethal meddling across the Middle East and the world.

This major socio-economic crisis in Iran is evolving as the regime continues to expand budgets allocated for its military and regional forays, and for entities involved in imposing a fierce domestic crackdown.
The result of such plundering has increased poverty throughout Iranian society.

One of the regimes’ officials said on 6 July 2017, “Poverty in Iran is very bad, 12 million people are living under the absolute poverty line and a further 25 to 30 million are living under the relative poverty line”. These, however, are official figures, which are far lower than the real ones.
Radicalization of protests
Initially, rallies by people whose life savings have been plundered were organized to demand the return of their money. But gradually the slogans have turned against the regime.

At a sit-in in front of the regime’s judiciary, which lasted 37 days, people called the head of judiciary an accomplice to the thieves. In another protest in front of the regime’s Majlis (Parliament), protesters called Speaker Larijani “the thieves’ playmate.”
On Tuesday, November 7, in a press conference held by Nobakht, Rouhani’s spokesman, a well-known member of Basij who introduced himself as a journalist acknowledged the anger and hatred of”the plundered” against the regime and its supreme leader, saying: “On Friday … I was in the press hall; I saw 300 people enter with red banners with very nasty slogans. I should not say this now; but they were against the leader, against Mr. Rouhani, against other officials, including Dr. Saif. I am Dr. Saif’s media advisor, but I spoke, of course, in defence of the Supreme Leader, I said I hope you all are depositors and not provoked individuals … Once I said this, they pushed me and I fell down. Now my shoulder is broken.”
More suppressive measures
Following the growth of anger and the spread of protests by the people who have been plundered, the Supreme Security Council ordered state radio and television not to report their protests.
Vaghfchi, the member of parliament, said, “The Supreme National Security Council has passed a bill that prevents radio and television from broadcasting depositors’ voices through the national media… after failing to broadcast my interviews on this issue twice, I followed up on the matter and I was told that the Supreme National Security Council has allowed radio and television in a resolution to prevent broadcasting of depositors’ voices.” He added that the protests of the plundered people “are among the country’s super-challenges. 10 percent of Iranians are involved in the financial institutions problem.”

Mohammad Ali Pour Mokhtar, a member of the parliament’s Judicial and Legal Committee,Cited “anti-regime slogans against the authorities and the system” as the reason for this legislation and added, “There are people who want to use this problem against the system and the state. This issue should be controlled.”

The regime is incapable of resolving any economic or social problem due to widespread corruption and mismanagement. Government reports and figures clearly indicate that there are no proper regulations and safeguards in any area, particularly in its financial system and institutions. How could the security forces, as reported by the regime’s officials, issue thousands of licences for these credit agencies, and then its president blame protesters who have lost their life savings for having invested in these institutions?

As for its survival, the regime needs to increase suppression in all forms, be it public executions or silencing any voice of dissent domestically, while also pursuing export of fundamentalism and terrorism to the region with all its destructive consequences.

On October 23, Mrs. Maryam Rajavi, President-Elect of the Iranian Resistance, saluted protesters and called on the continuous and tireless protests of the plundered people as a clear sign of the will of the Iranian people to overthrow the mullahs’ regime, which has brought nothing but executions, torture, brutality, and plunder for the Iranian people. This regime uses its people’s money for repression, warmongering and export of terrorism.

Iranian financial institutions are licensed but operate widely without being subject to any regulations or supervision. This problem is partially due to mismanagement, but a far bigger problem is the corruption that is deeply rooted in the entire system.

Previous article
The U.S. Administration’s Pick for the Iran Post Will Likely Back a More Aggressive Stance
Next article
Menacing Nuclear Cooperation Between Iran Regime and North Korea