Protest Gatherings of Various Sectors of the Iranian Society Outside Parliament 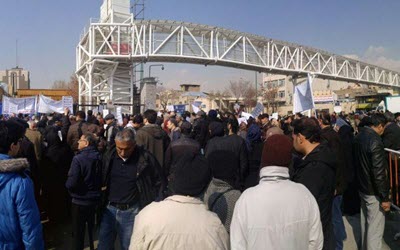 According to reports, about 700 people looted by the Caspian Institute held a protest in front of the Iranian regime’s parliament.

The demonstrators waved placards on which it was written: I’ve let my money somewhere in trust that it was written on its ‘Tthe Caspian credit institution licensed by the Islamic Republic’.

Also reports indicate that today a group of engineers and experts of Telecom protested in front of parliament and called for their job security.

On Tuesday, February 14, a group of engineers and operators of high voltage electricity (yellow caps) staged a protest rally outside the parliament. The demonstrators were calling for the cancellation of transfer of high-voltage electricity substations to the private sector.

A group of rural managers also held a protest in front of parliament. The demonstrators were calling for job security.

The rural managers also demanded to change their employment status, solving insurance problems and reform of the regulations of rural management in the country.

On the morning of Tuesday, February 14, approximately 150 retired teachers of 2016 gathered in front of the Planning and Budget Organization and demanded their bonuses of 30 years.

Protesters said, “All government departments give bonuses after 30 years to their retirees, but they have been playing with us for a year and eventually loot our bonuses”.