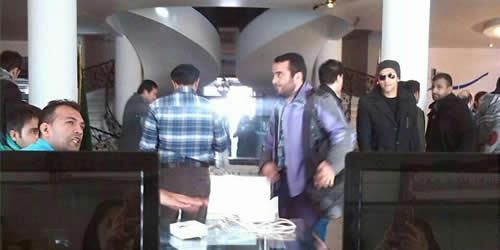 NCRI – Angry victims of the Padideh Shandiz investment scam in the north-eastern Iranian city of Mashhad on Monday occupied the state-affiliated company’s local office and chanted slogans denouncing corruption in Iran under the mullahs’ regime.

The group of angry protesters occupied the Padideh Shandiz office in Khayyam Street in Mashhad and staged a sit-in inside the building. The protestors announced that they would not leave the premises until they received back the money plundered from them by the state-affiliated institution.

Padideh Shandiz, which has close links to the regime’s Islamic Revolutionary Guards Corps, has billed itself as an international tourism development company active in restaurants, tourism and construction and lured investors by promising huge returns on their shares in projects in Shandiz, a suburb of the city of Mashhad, north-east Iran, and in the island resort of Kish. Its advertising campaign on state television was taken as reassurance that the regime backed the company.

On Sunday other victims of the scam rallied outside the Iranian regime’s judiciary in Tehran and chanted slogans against corruption and embezzlement by the mullahs’ regime.

The protesters carried signs reading: “End the root of oppression. How much longer must our rights be destroyed?”

The protesters chanted slogans against the government of mullah Hassan Rouhani, the fundamentalist judiciary and the regime’s Ministry of Economy.

Among the slogans they chanted were:

“Today is a day of grievance, people’s lives are up in the air”
“Oh Government of plans and hope, where are the plans? Where is the hope?”
“[Mullahs’ judiciary chief] Sadeq Larijani, what do you answer to the nation?”
“[Judiciary] Chief Sadeq, resign, resign”
“Ministry of Economy, shame on you, shame on you”
“Our state broadcaster [TV and radio] lied to us”
“All we have heard are lies”.