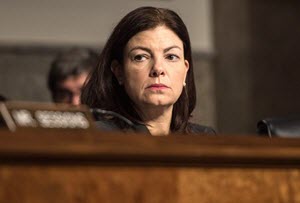 Sen. Kelly Ayotte (R-N.H.) has introduced legislation that would block lifting sanctions until after the Obama administration handed over a wide-ranging report on military aspects of the Iranian regime’s nuclear program and certified to Congress that any military-related activity tied to the program has ended.

The legislation — which is currently backed by 10 Republican senators including Sen. Marco Rubio (Fla.) — would also require Congress to pass a joint resolution approving the sanctions relief.
The proposal comes as the administration is preparing to lift sanctions against Iran’s regime as part of a deal on its nuclear program as early as January. The agreement was opposed by every Senate Republican.
As part of a possible military dimension to Tehran’s nuclear program, Sen. Ayotte’s proposal would also require that that the administration certify that Iran’s regime has ended any “research, development, testing, or fielding” of ballistic missiles that could carry a nuclear weapon, The Hill wrote.
The Obama administration has come under increased scrutiny in the wake of the Iranian regime’s missile tests since October.
Sen. Robert Menendez (D-N.J.) pointed to the tests as a key reason Obama should support extending the Iran Sanctions Act, which expires at the end of 2016. Senators are suggesting they’ll try to move an extension of the law early next year.
Both Republicans and Democrats have pushed President Obama to take a firmer response to the missile tests, with lawmakers arguing it could signal how the administration would handle violations of the nuclear deal.
Sen. Ayotte spearheaded a letter earlier this month, which was signed by 34 of her Republican colleagues, saying that the administration shouldn’t lift sanctions against Iran’s regime in the wake of the tests.
Meanwhile, 21 Senate Democrats are pushing Obama to act unilaterally or with European allies if the United Nations Security Council fails to reach an agreement on responding to Tehran.