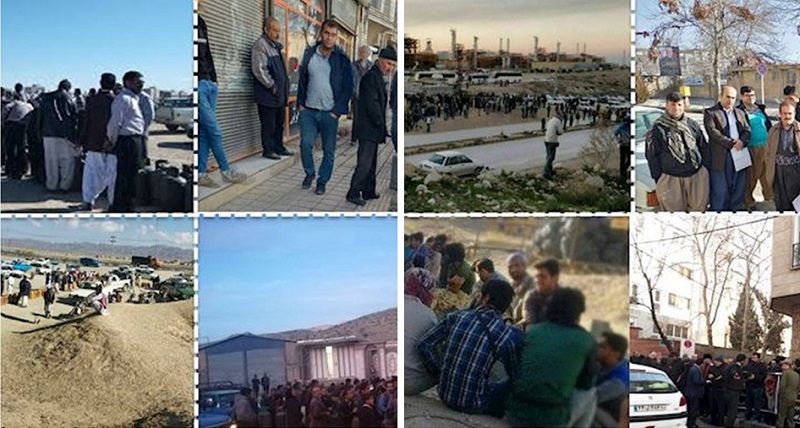 Protests by different classes of Iranian people across the country

Several protests have taken place across Iran over the past few days by different social classes. Taxi drivers from Pakrou Sabz Qeshm Company held a protest outside the company’s offices in Tehran on Sunday, where they chanted anti-regime slogans, like “Death to corrupt officials”.

The agents of the Iranian regime then began to use some of their tried and true methods for intimidating protesters, in order to prevent more people from joining the rallies and prevent more rallies from taking place, by filming the protests.

The protesters who were identified through analysis of the video were subjected to harsh penalties by the regime’s agents.

Meanwhile, seasonal workers of Shaygan Mehr Apadana Company in Marivan, western Iran, gathered in front of the regime’s governorate to protest having not received any wages for nine months. The protesters had previously held a rally last week in front of the Sanandaj governorate, in the capital of Kurdistan province, but their demands were ignored.

At the South Pars Oil Industry in southern Iran, protests erupted on Sunday with 350 workers blocking the entrance gates of the facility in Kangan to protest their four-month overdue wages.

Latest News on #Iran– Jan25 https://t.co/WknOqFcv0b
✳️Farmers in #Isfahan gather against building a power plant on the riverbed
✳️#Protest gathering in lack of liquid gas in Sistan
✳️Families of the victims of the #Ukraine passenger plane shot down by #IRGC take legal action

This project – the 14th phase of Pars 2 – used to be under the control of the terrorist-designated Revolutionary Guards (IRGC), which caused more problems for the workers. The IRGC is infamous for wasting the country’s resources on terrorism and developing weapons of mass destruction, which places a huge strain on the economy and the workers.

Pars 2, which is one of the key facilities for Iran’s oil, gas and petrochemical industry, is in the Pars Special Energy Economic Zone in Bushehr province. The area is divided into three zones; Pars 1 in Asaluyeh, Pars 2 in Kangan, and Pars 3 (sometimes called Northern Pars) across various cities including Tangestan, Dashti, and Bushehr.

Unpaid or underpaid wages have been a common reason for protests in Iran over the past few years, with private workers and government employees all across the country coming out to demonstrate against unpaid and months-delayed salaries. In most cases, the regime responded by cracking down violently on protesters or complying with barely any demands in order to try and stop the protests.

Other recent protests include the strike by the bus drivers of the Khomeini Harbour on January 25. The drivers went on strike in protest to their low wages and the high price of spare parts for their buses. The drivers highlighted the regime’s empty promises.