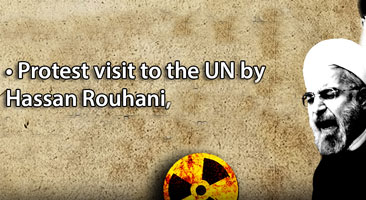 Thousands of Iranian-Americans & human rights advocates to protest visit to the UN by Rouhani whose regime has:

Executed 170 people since his election and oversaw two deadly attacks on Iranian dissidents in Iraq;

Boasted of deceiving the international community while advancing the nuclear weapons program;