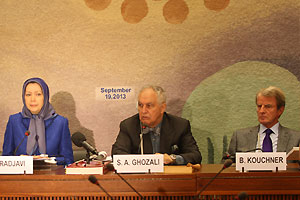 GENEVA (AP) — Two former foreign ministers of France and Algeria say a Sept. 1 attack in Iraq that killed 52 members of an Iranian dissident group was a premeditated massacre, and the United Nations must press for the release of seven more who had were taken hostage while seeking asylum.

Ex-foreign ministers Bernard Kouchner of France and Sid Ahmed Ghozali of Algeria are calling for a thorough international probe into the killings at Iraq’s Camp Ashraf, the longtime home for members of the Mujahedeen-e-Khalq, which strongly opposes Iran’s clerical regime.

They told a public meeting Thursday at the U.N. in Geneva that the killings represent a crime against humanity and the missing seven are in grave danger.

The dissidents accuse Iraqi security forces of carrying out the killings, but Baghdad denies involvement.

Previous articleCongresswoman Chu: US must act to release Ashraf hostages and protect PMOI in Iraq
Next articleRally against Iran regime’s president, Hassan Rouhani