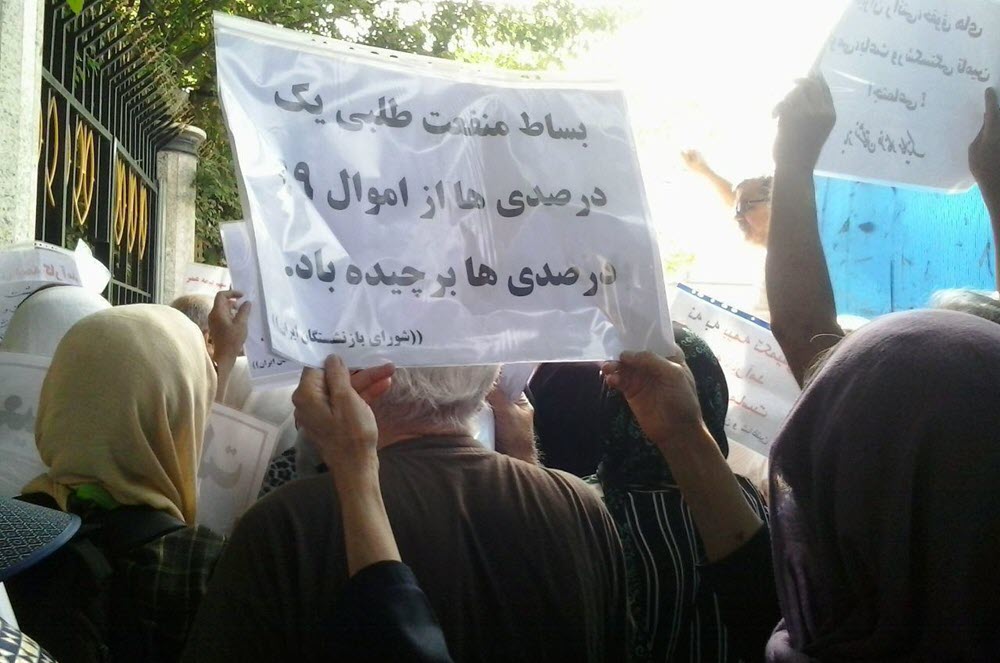 A large group of retired government employees and military personnel gathered outside the labor ministry in Tehran on Tuesday to protest the lack of response to their demands.

There was a heavy police presence designed to suppress the protesters, but the retirees continued their demonstrations and held aloft banners with their slogans written on them, including: “The hands of plunderers must be cut short of the retirees’ fund”, “Our homes have been plundered, we have no fear to expose [the government], we will stand till the end”, and “The one percent are making profits out of the pockets of the 99 percent”.

The protesters also chanted slogans like “Stellar wages [of government officials] are in contrast with public misery”, “If [government] embezzlement is stopped, our problems will be solved”, and “The line of poverty is 70 million rials, our salary is 20 million rials.”

Retired civil servants have taken part in protests over low wages on several occasions in the past year, where they’ve made clear that rising inflation and the steep decline in the national currency has made it harder for the retirees to provide for their families. However, regime officials have not responded to the demands for wage increases.

During their protests, the retired employees expressed solidarity with other sectors of Iranian society, like workers, teachers, and students, also demonstrating for basic rights, as well as calling for the release of political prisoners and activists.

Here, retirees chanted slogans like “Imprisoned teachers must be freed”, “Teachers, students, workers, unity, unity!”, and “Government, parliament, stop deceiving the people”.
Meanwhile on Tuesday, there were several other protests on other matters across Iran.

Customers of the Caspian Credit Institution, which has strong ties to the Iranian regime’s Revolutionary Guards (IRGC), gathered in front of the Central Bank to protest the plundering of their wealth and investments. They chanted: “The people are tired of hearing promises. Disgraceful government, our money is gone.”

This is just one of several financial institutions involved in a major embezzlement case about the theft of billions of dollars’ worth of investor money. Most of these institutions are owned by regime-linked groups and people.

Customers have been protesting in order to receive the return of their stolen investment for two years, but the regime has refused to meet this demand.

In Abejdan, Khuzestan province, a group of public-sector workers gathered in front of the governor’s office to protest the 10-month delay in receiving their salaries. The workers held a banner that read: “We are the workers of Abejdan, we haven’t received our wages for 10 months. We haven’t received our New Year bonus. We don’t have insurance. Officials! Respond to us! We are hungry!”

Previous articleIran Regime Hangs 1 in Public, 4 Others in Prison
Next articleReport: From Iraq to Yemen, Drones Raise U.S. Alarm Over Iranian Regime’s Plans