Round up of Iran Protests: February 6-8 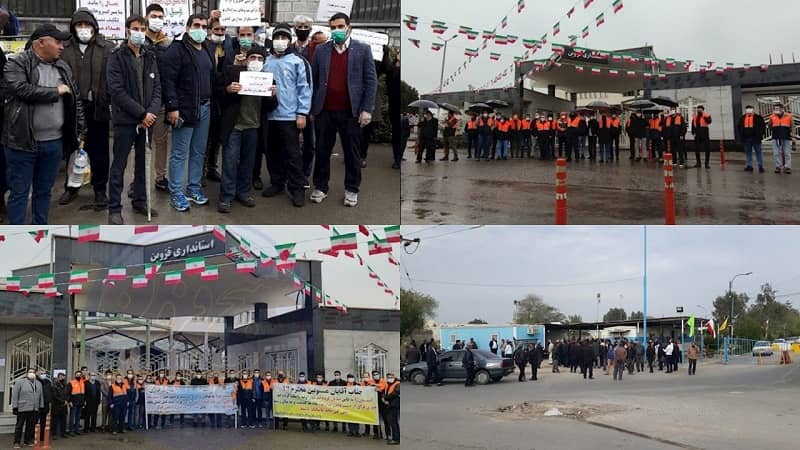 Reports from Iran obtained by the People’s Mojahedin Organization of Iran (PMOI/MEK) show protests have continued across Iran within the last few days. These protests once again indicate Iranian society’s restiveness. They also show how people consider the regime as the real source to Iran’s economic and social crisis.

On Monday, Mahshahr Petrochemical personnel and workers, in southwest Iran, held a rally and marched for the second consecutive day, protesting the regime’s refusal to implement the job classification plan and discrimination against workers.

Monday, February 8, marked the third day of protests by toll workers in Qazvin province. The employment status of these workers was supposed to be determined by February, but to date, the regime’s authorities have refused to make decision to return these workers to work, and they are still in a state of uncertainty.

On Sunday, a group of janitors of the Ministry of Education held a rally in front of the regime’s Parliament, protesting their low wages.

Simultaneously, on Sunday, a group of contract teachers of the Technical and Vocational Education Organization held a rally in front of Iran’s parliament. They chanted: “We have suffered but have not seen justice.”

On Sunday, retirees in Khuzestan province, southwest Iran, marched in protest to the governorate and hanged a banner at its entrance which read: “The cry of hungry retirees.”

There have been numerous protests by retirees across Iran within the last few days. On February 3, for the second consecutive week, a large number of retirees and pensioners living on Social Security gathered in Tehran and 19 other cities to protest the deteriorating living conditions and the skyrocketing prices.

In a message, Mrs. Maryam Rajavi, the President-elect of the National Council of Resistance of Iran (NCRI), saluted the brave retirees who rose up and persisted with their protests and chanted, “Only by taking it to the streets, we can obtain our rights.” She added, “So long as this regime is in power, poverty, inflation, and unemployment, as well as corruption and repression will increase. The only way to resolve it, is to get rid Iran of the ruling religious fascism and establish freedom and justice in our captive homeland.”

The only way to resolve poverty, inflation and unemployment is to get rid of the ruling religious fascism and establish freedom and justice in #Iran.https://t.co/Vc9b0Byrvb

Again, on Sunday, a group of workers of HEPCO heavy machinery factory in southwest Iran, who are now in Tehran, held a protest in front of the regime’s parliament. HEPCO workers have been protesting for the last few years for having low incomes and lack of job security.

On Saturday, February 6, workers in the municipality of Sisakht in Kohgiluyeh and Boyer-Ahmad Province, southwest Iran, staged a rally demanding their 10-months delayed wages.

Since the beginning of the current Persian year, these workers have only received their salaries in March and have not received their wages in the past 10 months.

While many workers in Iran have not received their wages, the regime’s state-run media acknowledge that even if they were paid, their salaries could not cover their expanses.

“While the poverty line has reached 10 million tomans, the wages of the weakest sections of society are still around two-and-a-half million. So, the gap between living conditions and inflation has become more critical, especially this year,” wrote the state-run Hamdeli daily on January 31.

Instead of helping people, the regime’s authorities have been brutally oppressing people and their demonstrations.

On Saturday, regime agents in the water department, accompanied by a repressive police force with heavy machinery, raided the site of the only agricultural water well belonging to the people of Morche Khort village in Isfahan and destroyed wells and pipes. Thus, thousands of trees that had been planted by people over the years will dry. The regime’s oppressive forces suppressed locals’ protest and continued their destructive plan despite the pleas of farmers and deprived people in the village.

The regime’s attitude once again confirms that the mullahs have no intention of resolving Iranian people’s economic hardships.

As Mrs. Rajavi highlighted, “So long as this regime is in power, poverty, inflation, and unemployment, as well as corruption and repression will increase. The only way to resolve it, is to get rid Iran of the ruling religious fascism and establish freedom and justice in our captive homeland.”