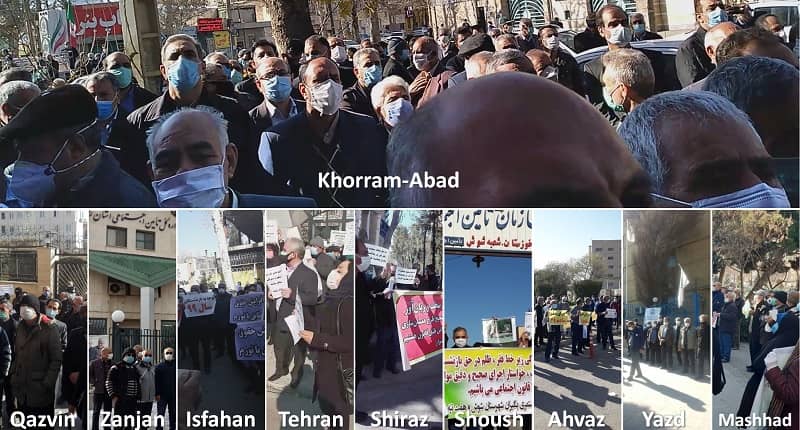 Iranian cities witnessed more protests by all walks of life during the last few days. People protested the regime’s economic mismanagement, which during the coronavirus outbreak, has intensified their living problems. While people around the globe started the new year with more hope, Iranians are still grappling with poverty and the coronavirus pandemic.

Reports of these protests are tallied by the Iranian opposition, People’s Mojahedin Organization of Iran (PMOI/MEK).

On Monday, January 4, a group of nurses of health centers in Ahvaz, southwest Iran, protested the systematic job discrimination, lacking job security, and unequal wages. While nurses are on the frontline of combatting coronavirus, they are enduring enormous pressure in their lives.

These protesting nurses said: Our salaries and bonuses are reduced in the last few months. Therefore, due to the pandemic we had a very difficult situation within the last years.

On Monday, for the second day, the corporate employees of Yazd Health Center, in Yazd province, central Iran, gathered and went on strike at the office of the representative of the regime in Ashkzar and Yazd. These protesters said they will continue their strike until their demands are fulfilled.

These workers chanted slogans in solidarity with and support of nurses and protested their unfair salaries.

On January 4, Residents of Azimieh town in Qazvin province, northcentral Iran, held a gathering and protested lack of water and electricity in over 330 hectares of land in this town. Protesters said the large cooperatives had received money from the people to provide infrastructure and municipal services for the area’s certified lands, but the town was left without any facilities.

On Monday, farmers in Isfahan province, central Iran, gathered in protest to the diversion of Zayandeh Roud River’s water, which leaves their lands dry. These protesters underlined they will stand until the end and will not let authorities divert the water. The Zayandeh Roud river once watered this region, flowing down from the Zagros Mountains, through the city of Isfahan. But it has been dried within the last few years.

The regime’s negligence in paying attention to Iran’s environmental issues and its systematic plundering of the national wealth have devastated Iran’s ecosystem. The Revolutionary Guards (IRGC) has added to the drought in Iran by constructing dams.

On Sunday, January 3, hundreds of retirees staged a nationwide protest across Iran. These protests were in 22 Iranian cities, including in Tehran, Kermanshah, Tabriz, Khorramabad, Arak, Isfahan, Shiraz, Ahvaz, Qazvin, Hamedan, Rasht, Sanandaj, Shush, Karaj, Neyshabur, Yazd, Bojnourd, and Shushtar. The retirees protested the discrepancy between their benefits and those employed as well as the lack of parity between their wages and inflation and high prices. In Karaj, the State Security Force prevented the retirees from taking pictures and videos. In Shush, southwest Iran, in addition to the protests in front of the Social Services Office, the retirees also staged a march in protest.

On Sunday, contract workers in Gachsasran oil company, in Kohgiluyeh and Boyer-Ahmad, southwest Iran, held a protest in front of the company’s headquarters, demanding their delayed wages.

Protesters spread their empty tablecloths in the street as a symbol of their poverty. These workers said they do not have job benefits and do not even have proper working cloths.

In a similar development on Sunday in Kohgiluyeh and Boyer-Ahmad province, sewage workers staged a gathering in front of the province’s sewage and water department and demanded their delayed paychecks.

On Sunday, contract employees of Bafq health center, in Yazd province, held a protest in front of the governorate. They demanded their delayed paychecks and job bonuses. They also protested discrimination between contract workers and permanent workers.

On Saturday, contract teachers in Yazd province held a protest in front of the governorate, demanding their delayed salaries and unfulfilled promises of officials regarding their job status.

On Sunday, contract workers of Shiraz health center in Fars province, southwest Iran, held a rally in front of the governorate, protesting their poor working conditions and demanding their delayed paychecks.

The regime’s discrimination and not paying attention to health workers and medical professionals has continued even during the pandemic.

In a similar development on Saturday, contract nurses in Yasuj, in Kohgiluyeh and Boyer-Ahmad province, who were working hard since the beginning of pandemic, protested their sudden unemployment and Yasuj University of Medical Sciences’ refusal to recruit them.

On Saturday, workers of the National Steel Group gathered in Ahvaz to protest the appointment of new directors of the procurement, administrative and financial, manpower, technical and operations departments, and kicked them out.

On January 2, firefighters in Isfahan held a rally in front of the central building of the regime’s municipality in Isfahan, demanding their salaries and benefits.

On Friday, January 1, a group of gardeners in east of Isfahan province held a rally in front of the office of the members of the regime’s parliament to protest the government’s order to demolish their garden houses.

These protests once again underline the restiveness of the Iranian society and that the people of Iran only hold the regime responsible for their economic and social hardships. The ongoing social dissatisfaction in Iran has frightened the regime. This fear is reflected by the regime’s state-run media.

“We should be worried. The continuation of [the coronavirus outbreak] will have destructive effects and cause many troubles for the country’s economy and society. In the current coronavirus situation, causing false hopes is useless. The coronavirus and a failed economy… are having a massive impact on making people’s livelihoods harder,” wrote the state-run Sharq daily on Sunday.

Previous article
EDITORIAL – Iran: Execution and Suppression, Mullah’s Regime Means To Hold on To Power
Next article
Iran: Qassem Soleimani’s Banners and Billboards Set on Fire on His Death Anniversary