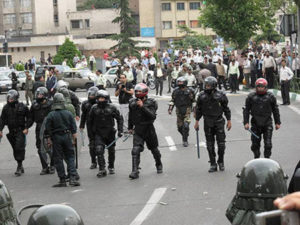 The regime in Tehran hanged three prisoners on Sunday, including two political prisoners, in Zahedan northeast Iran, bringing the number of executions in just twenty days to 30.

On December 31, 2020, the regime hanged three Sunni prisoners, Hamid Rastbala, Kabir Sa’adat Jahani, and Mohammad Ali Arayesh, on the charge of being “outlaws” in Vakil-Abab Prison in Mashhad, northeast Iran. They had endured five-and-a-half years of imprisonment and torture. Tehran once again confirmed its disregard for international human rights standards.

Also, on Thursday, Brigadier General Qassem Rezaei, the State Security Force (SSF) deputy commander, told his agents on TV to “break the arms” of defiant youth who the criminal regime calls “thugs.” Rezaei said: “If you catch them on the scene and I see that he is standing unharmed, you should answer why he is still unharmed.”

He also confirmed the regime’s disregard for international law and even Iran’s own laws, saying the detainees’ only right is to “stay alive.”

The SSF forces along with the Revolutionary Guards (IRGC) troops opened fire on protesters during the November 2019 uprising, killing 1500 innocent civilians.

The clerical regime faces a restive society, and authorities have not forgotten what they call “the bitter experience” of the major Iran protests in November 2019. The nightmare of being toppled haunts the regime leaders.

Economic and social factors, capable of triggering another uprising – as they did in November 2019 – have intensified.

The regime’s economic mismanagement coupled with its institutionalized corruption has devastated Iranian people’s lives. The rising inflation rate and poverty index are multiplied by the coronavirus outbreak which has created what Iran’s state-run media describe as a “volcano of the starving people.”

“… One should fear the time that no one will be able to put the brake on the volcano of the starving people,” wrote the state-run Arman-e Melli on November 29, 2020.

The Iranian people witness how the regime plunders their national wealth and wastes it on nuclear and missile programs and supporting terrorist groups in the region. On Sunday, December 27, Hassan Nasrallah, chief of Hezbollah, acknowledged that after the 33-day war in 2006, when 200,000 homes were destroyed in Lebanon, Qassem Soleimani, the eliminated chief of the IRGC Quds Force paid one years’ worth of rent and expenses of the families who lost their homes.

While the regime persists in using Iran’s national wealth to continue its adventurism, people are grappling with poverty, the coronavirus outbreak and its rising mortality rate, and now air pollution. They witness how the regime’s officials and their relatives live luxurious lives.

To hold its fragile grip on power, the regime has increased its oppressive measures.

Sadly, in the face of Iran’s increasing human rights violations, the international community, particularly the European Union, keep on turning a blind eye, as they did throughout the past 40 years. This inaction has granted the mullahs in Tehran a sense of impunity to continue their crimes.

In September, seven United Nations human rights experts wrote a letter to the Iranian regime demanding answers over the 1988 massacre. Their letter became public in early December 2020, after the regime once again failed to provide any response. Underlining that the 1988 massacre “may amount to crimes against humanity,” the UN experts highlighted the “systematic impunity enjoyed by those who ordered and carried out” the massacre, due to the international community’s failure to hold the perpetrators of this crime accountable.

Ebrahim Raisi, a main preparator of the 1988 massacre, is Iran’s current Judiciary Chief. The rising number of executions in Iran is not a surprise when a “hanging judge” is the highest figure of “justice.” And the Minister of Justice, Alireza Avaei, is also another member of the death commission in 1988.

A surprise is that the EU leaders, despite praising human rights values, and their recently adopted global human rights sanctions regime against human rights violators, remain appeasing the regime in Tehran.

The EU leaders have only“condemned” human rights violations in Iran but have taken no action.

Would Iran take these condemnations serious, when the EU leaders make efforts to revive the 2015 Iran nuclear deal despite the fact that the regime continues breaching the agreement, and when they negotiate with the regime’s Foreign Minister Mohammad Javad Zarif, whose diplomat, Assadollah Assadi, is on trial in Belgium for attempting to bomb a peaceful gathering in Europe?

Assadi, who tried to bomb the opposition rally in 2018 in Paris, refused to appear in the court, claiming “diplomatic immunity.” He will remain to do this while his boss enjoys this immunity, and the regime’s leaders such as Raisi keep on killing people inside Iran, enjoying the “systematic impunity” they have.

The Iranian people have to pay the price of the EU’s failure in abiding by its humanitarian values. The 2018 bomb plot showed that EU citizens also have to pay a heavy price when their leaders maintain negotiating with the terrorist regime in Tehran.

The EU should act now. It should go beyond letters and condemnations, and it should not allow the regime to make executions in Iran “regular” for the world community. If not contained, the regime will spread terror and chaos across the globe.

The EU should sanction, Raisi, Zarif, and all other officials of the regime, and make any relations with the regime contingent on a complete halt to human rights violations and terrorism by the regime.