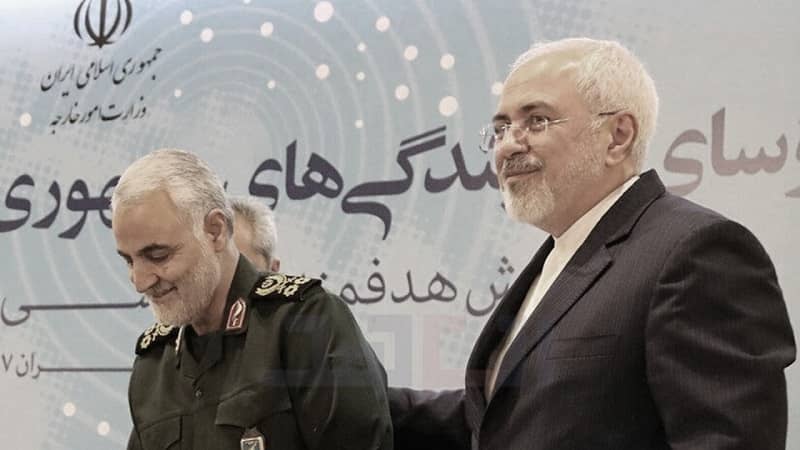 “I knew Haj Qassem many years before I become a Minister, or an ambassador. We had closely consulted each other in different periods. [Before I become Foreign Affairs Minister] Haj Qassem invited me to share thoughts on Syria a couple of times,” Zarif said in an interview with state television on Sunday.

“When I became a minister, I decided that we had to coordinate our works together. He was a commander who was the soldier of the Supreme Leader acting on his orders. Whenever I met Haj Qassem we spoke about regional issues,” he added.

“For example, we talked about how we persuaded the Russians to enter [the Syrian war]. Haj Qassem and I spoke over what should I say in political meetings, follow what policies in negotiations with Russians or regional countries,” Zarif said confirming the regime’s so-called “diplomacy” is the flip-side of its “terrorism.”

Qassem Soleimani was the commander of the Revolutionary Guard (IRGC) Quds Force and oversaw the regime’s terrorist activities. Soleimani implemented mandates by the regime’s Supreme Leader, Ali Khamenei, to spread chaos and terrorism across the region.

He played a key role in holding Bashar-al Assad’s dictatorship in power in Syria, by creating and mobilizing proxy groups and foreign fighters, and using ruthless strategies, such as blind bombings of Syrian cities, killing countless innocent civilians.

Soleimani also played a significant role in financing terrorist groups across the Middle East. Mahmoud al-Zahar, a senior member of Hamas’ leadership, told Al-Alam, the Arabic-language network of Iran’s state-run television, on December 27, that during a 2006 meeting with Qassem Soleimani in Tehran he explained “the fundamental problem of staff and social services of the people of Gaza” to Soleimani. “Haj Qassem immediately responded to our request, so that the next day, when the trip was over, I saw $22 million in our luggage in the airport.”

Soleimani was also behind killing coalition and American forces in Iraq following the 2003 U.S.-led invasion of Iraq.

“Who made so much trouble for them [American troops]? It was the same commander of shadows. Who trained [the regime’s terrorist proxy groups] and used the tactic of using roadside bombs, that were like stones? The Americans called these bombs IEDs. I remember how disturbed they were, how the U.S. media reflected this disturbance in 2003, after the U.S. occupied Iraq. Who disturbed them?” said Nader Talebzadeh, head of the “New Horizon” organization, a front organization of the IRGC and its Quds Force, on Sunday.

Despite Soleimani’s criminal record, Zarif, as the regime’s “chief apologist,” has been trying to whitewash his crimes, and portray him as a hero following his elimination in a U.S. drone attack on January 3, 2020.

In his interview on Sunday, Zarif underlined that when Soleimani was eliminated, “The first aim of my colleagues and I in the Foreign Ministry was to take the propaganda in hand and portray Haj Qassem as a hero of combatting terrorism and promoting peace.”

The regime’s chief demagogue has not only tried to whitewash crimes by the criminal Soleimani and coordinated his actions with Soleimani, but has played an active role in spreading terrorism.

Recently, a court in Belgium tried Assadollah Assadi, Zarif’s incarcerated diplomat-terrorist, and his three co-conspirators, for their attempted bombing of the opposition rally in 2018 in France.

According to the prosecutor and based on evidence, Assadi misused his diplomatic privileges to transfer explosives from Iran to the European Union, using a commercial airliner, then handing the bomb over to two other terrorists.

As Assadi’s superior official in the Ministry, Zarif facilitated and was fully aware of this terrorist attack in the heart of Europe.

Since his arrest, Assadi claims he has so-called “diplomatic immunity.” While caught red-handed, Assadi speaks of diplomatic immunity, counting on the longtime appeasement policy of the EU, and the fact that EU leaders continue to negotiate with his boss, Zarif.

The recent remarks by Zarif and his role in facilitating terrorism, then whitewashing it, once again show there is no difference between officials of Iran’s terrorist regime.

The EU should stop its contradictory approach in dealing with terrorism. Zarif should be sanctioned and prosecuted for his role in terrorism. The EU should shut down the regime’s embassies and expel its agents.

The EU’s failure to take these measures thus far has only emboldened the regime, thus, jeopardizing the lives of Iranians abroad as well as EU citizens.

Previous articleIran News in Brief – January 5, 2021
Next articleEDITORIAL – Iran: Execution and Suppression, Mullah’s Regime Means To Hold on To Power