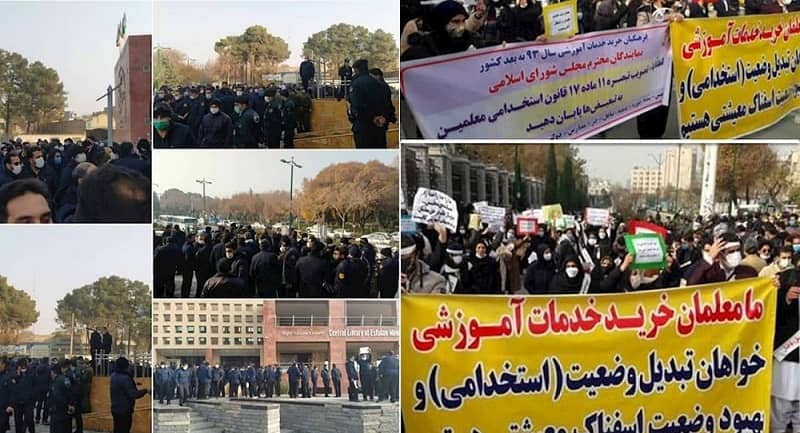 Reports from Iran, tallied by the People’s Mojahedin Organization of Iran (PMOI/MEK) through its vast network inside the country, indicate there have been more protests by all walks of life across Iran in the last two days. Protesters identify the clerical regime as the real source of all economic and social problems.

On Sunday, a group of contract teachers in Tehran gathered in front of the regime’s Parliament. They protested the uncertainty of their employment status. Protesters said: “We are around 13,000 contract teachers across the country who demand clarification of their job status and unification of contract models. In some provinces, contract teachers only receive 300,000 tomans per month and have 10-day insurance. All the while, their working hours are no different than other teachers.”

The poverty line for a family of four in Iran is nine million tomans, according to the state-run Samtnews.

On December 13, workers of Ilam municipality in northwest Iran held a protest gathering in front of the Judiciary of Ilam province, demanding their unpaid wages. They held a sign which read: “What is the crime of a worker like me? It has been months that municipality accounts are blocked. We are hungry.”

On Saturday, retired workers in Khuzestan province, southwest Iran, in protest to the associations’ performance, gathered in the office of the provincial pensioners’ association and demanded that the association members be held accountable.

Protesters emphasized that if “these associations cannot seriously pursue retirees and pensioners’ claims, retirees should organize their independent organizations and follow them independently.

On Saturday, December 12, poultry producers in Fars province, central Iran, in protest to the low price of 14,200 tomans for live chickens by the Ministry of Industry, Mine, and Trade (MIMT), held a protest rally in front of the Fars Governor’s Office.

“Determining a very unfair and low price of 14,200 Tomans for live chickens by the MIMT officials, Ministry of Agriculture Jihad and the governorate is ultimately aimed at bankruptcy of poultry farmers, the closure of production and the creation of opportunity for certain people to import chicken meat,” a protester said.

On Saturday, a group of nurses of the so-called “Martyrs of the Persian Gulf” hospital staged a protest gathering demanding their delayed experience bonuses in front of the Persian Gulf Martyrs Medical Center in Bushehr, southwest Iran.

On December 12, private bus drivers in Tehran staged a protest in front of the governor’s office to protest private bus drivers’ dismissal after 14 years of work. One of the drivers said: “If this situation is going to continue, we will have nothing to lose.”

On Saturday, city of Khalkhal contract workers, who work under the responsibility of a contracting company to maintain water supply facilities, northwest Iran, protested their unpaid wages and bonuses for the last eight months.

On Saturday, the contracting personnel of the ABFA Port Office, of the so-called Imam port in southwest Iran, staged a protest rally in front of the ABFA office. Protesters demand their salaries, insurance, and legal arrears for nearly five months.

Due to the regime’s institutionalized corruption and economic mismanagement, the ongoing economic crisis in Iran has pushed more Iranians under the poverty line. Thus, these protests will continue for as long as the mullahs’ regime is in power.