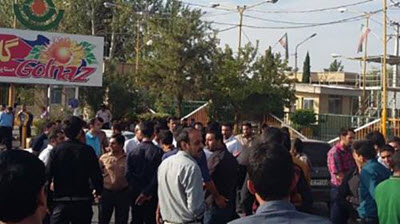 NCRI – Tehran – A group of people who have lost their properties through investing in “Padideh” credit institute, gathered on Wednesday September 14 in front of Ministry of Economy in Tehran to protest against lack of investigation into their stolen property.

The demonstrators sent a letter, indicating their critical financial situation and demanding an urgent investigation into their stolen properties.

Kerman (Southeastern Iran) – In protest against non-payment of their overdue salaries, More than 300 “Golnaz Food Industry” workers in Kerman shut down the factory by leaving t their cars in front of the factory gate on Wednesday September 14. The protest had started a day earlier. A member of the factory labor council pointed out that the workers received their last salaries in May and continued: “80 percent of the workers got fired without being paid.”

He stated that the workers were told that the factory was running out of raw material while the factory warehouse was full. He added: “We gathered several times during the past three months, but received no response from anyone.”

Iranian State media reported the news under the title:”Golnaz Vegetable Oil Factory in Kerman was shut down.”

Bandar Abbas (Southern Iran) – According to reports, gold dealers in Bandar Abbas continue their strike. The strikers say that until the oppressive taxation is not cancelled, they will refuse to reopen their shops.

It should be pointed out that Bandar Abbas gold dealers went on strike from August 29 to protest against tax extortion.

Yasuj (Southwestern Iran) – A group of farmers in Yasuj held a protest gathering in front of the Veterinary Organization in the city. To show their dissatisfaction, the farmers poured a large amount of milk on the ground demanding that their economic problems be dealt with.

Ilam (Western Iran) – According to reports, a group of people who lost their properties through investing in “Arman” credit institute in Ilam, held a protest gathering in front of the institute, demanding the return of their stolen properties.