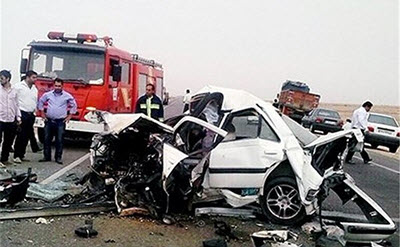 NCRI – Chief of “Road Police” in Hamedan province (Western Iran) said on Wednesday September 14, in Hamedan’s Transportation and Safety Commission: “Hamedan Road Police is facing a lot of problems in Hamedan-Saveh freeway. When it rains, the situation in the freeway turns into a crisis.”

“Tasnim” news agency quoted in September 15 from Reza Azizi as saying: “There is a memorandum of understanding between Road Police and Road Maintenance Organization according to which parking places are to be set up on roadways across the country so that drivers have the possibility to take a rest in these places if needed. This memorandum of understanding has not been implemented in Hamedan Province, though.”

Azizi stated that Hamedan-Saveh freeway is located at a point where the passengers entering it are tired and sleepy and that a monotonous road as well as a lack of welfare infrastructure has made the drivers get sleepy while driving on this road.

Citing the fact that during the last summer only four people died as a result of traffic accidents on this highway, Azizi said: “During this summer the number of traffic fatalities in this area increased to 18 people which is a 458 percent increase.”

Azizi stated that following an increase in toll rates, heavy vehicles are now commuting from the old Hamedan-Saveh road. He added:” Road markings on the route from Famenin to Dokhan are gone and that’s why some drivers think that it’s a one-way road while it’s two-way.”

Azizi said: “According to the objectives defined in the sixth development program, we should see less traffic accidents across the roads, while considering the Road Police facilities and lack of relevant contributions, this is not going to happen.”

Previous articleIran: clash of the rival regime’s factions
Next articleSocial protests in Iran