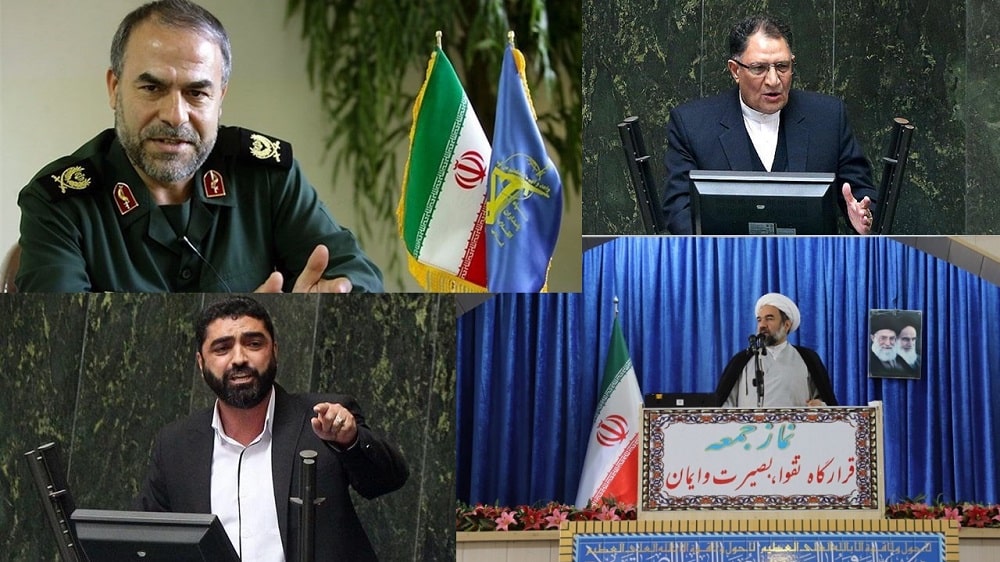 While the protests over soaring prices of food staples are spreading from one province to the other, the systemic hypocrisy of state officials is speaking volumes of the regime’s grave concerns.

The Iranian regime’s Interior Minister Ahmad Vahidi told the state TV: “Well, obviously the enemy has tried and is doing and will continue to work hard. Of course, the enemy is showing its enmity, and this is their job. This is the only effort they can make. But thanks to God, our people have resisted these calls (for uprising) with power and firmness. Of course, it was clear that those who don’t have support among the people, you think, for example, a group of hypocrites (the pejorative term used by the Iranian regime’ to disparage the MEK), who has killed 16,000 of our people, do you think they can bring people to the streets?”

In an interview with the state-run news agency ILNA, MP Ahmad Avaei stated: “The person who was killed in the recent rallies in Khuzestan was not from the city of Dezful, rather he was a resident of Andimeshk.”

“Currently, the situation in Dezful is calm. Two nights ago, about 70 people gathered in this city, and they soon dispersed. The people who gathered in Dezful were not residents of the city and were mostly from the suburbs outside Dezful!”

The MP who is supposed to represent the people in Dezful said that he was unaware of the number of detainees of recent rallies in the city of Dezful.

As usual, the regime also tried to lay the blame on everyone and anything else, except those in charge.

Hassan Mirzakhani, the governor’s economic deputy of the Markazi Province said: “Some biased people and dissident media are trying to make the situation in the country look scary, while the situation today is not scary and the situation of goods in the country is appropriate. However, people are demanding too much, and this has somewhat increased the pressure on the market.”

Mirzakhani stated: “The reason for some concerns in the flour and bread sector was due to the violations of a number of bakers who were arrested, and their bakeries were sealed today after the necessary warnings.”

But as the Iranian people’s perseverance is becoming clearer by the day, there were others who chose a different kind of tone.

During his Friday prayer sermon, Mostafa Mohami, the Supreme Leader’s representative of Zahedan said: ‌”Of course, in the post-revolutionary era, our society has always been under the enemy’s cruel sanctions. These days, there is a lot of propaganda out there and they want to induce that you cannot resist the enemy. Some may be weak in faith and bow to pressure. Both the hypocrites (the MEK)  inside the country and abroad are creating propaganda, cooperating with global arrogance and international Zionism. They have joined hands to break the resistance of the people of Iran.”

Speaking for the Basij force leaders in Mashhad,  Brigadier General Yadollah Javani, political deputy of the IRGC, said: “Most of the first generation of the revolution has passed away today. The enemy wants to manage how society is thinking. This is the mechanism of the enemy’s war. The enemy is capturing the minds, hearts, and souls of the youth in order to manage their feelings and behavior.”

“They say that our problems are due to our hostility, and gradually they will say that the problem of the country is the leadership that does not allow negotiations with the United States, Javani added and while stressing about the deepening of public hatred he warned: “Humans can also be influenced. It is a fact that three jihadist students are being attacked by a young man today, and this is because of the mentality he was influenced by. The person who caused the martyrdom of Martyr Shoushtari in Sistan and Baluchistan did so with the same idea.”

During his speech in the regime’s parliament’s session today, MP Ahmad Rastineh said: “The hypocrites (the MEK), and those who induce sedition and counter-revolutionary forces have an agenda to exploit the wave of popular protests. By attacking the offices of the Friday prayers Imams and Basij centers of this city, they once again showed their enmity with the nation.”

Warning his colleagues about the public’s anger, Rastineh added: “Their malice was put on display in the martyrdom of the young Basiji Saadat Hadipoor Hafshjani and the attack on the Basij base in Haftshajan. They wanted to separate the nation and the revolution by creating terror and by killing protestors in order to divert the rightly protests of the people towards violence.”