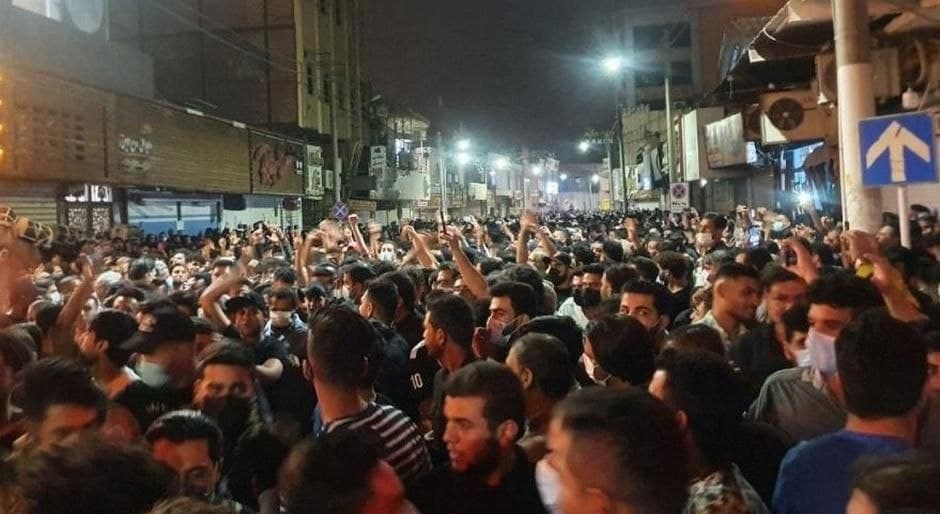 The Iranian regime’s Foreign Minister recently made a public show of opposition to infrastructure projects in neighboring countries that have supposedly had adverse impacts on Iran’s waterways. Hossein Amir-Abdollahian told reporters that over the past two months he has raised relevant issues with his Turkish counterpart at least three times. He also claimed that Tehran requested the establishment of a joint bilateral committee four months ago, in hopes of setting the stage for a bilateral agreement on dam construction and water management, but this has not been forthcoming.

Closely coinciding with Amir-Abdollahian’s statements, the state-run Islamic Republic News Agency ran a story that seemingly boasted that Iran’s Department of Environment had moved to sign a memorandum of understanding with Iraq and Syria, with the aim of combating the mutual threat posed by dust storms. However, this was shortly preceded by a report from the Iran Human Rights Monitor which pointed out that a major source of dust storms in and around Iran was the drying of wetlands as a result of Tehran’s systematic mismanagement of water resources.

On May 28, the Iranian Students News Agency quoted Sedigheh Modarres Tabatabai, an official with Iran’s Environmental Protection Organization, as saying, “Currently, 43 percent of the wetlands in Iran have the potential to become a source of dust. This means that if the conditions of the wetlands are not favorable and their water needs are not met, they can become new centers of dust in the country.”

Tabatabai specified that 42 of Iran’s 226 wetlands had already partially dried up. The ISNA report did not go into great detail about the causes of the drying, but various prior reports have emphasized that uncontrolled dam construction, often in absence of environmental impact reports and under the direction of the Islamic Revolutionary Guard Corps (IRGC), had contributed to the drying of some major bodies of water, including Lake Urmia.

In this context, Amir-Abdollahian’s sudden declaration of concern for Turkish damming projects may be partly intended to deflect blame for the current situation away from Tehran’s own policies and onto foreign scapegoats. Meanwhile, the pursuit of a yet-to-be-defined agreement with regional allies may give the impression that those allies acknowledge mutual responsibility for certain environmental problems, even if they primarily impact the theocracy itself.

It has arguably become more important over the past two months for regime officials to send the message that they are working to avoid predictable disasters while closely investigating issues related to project management.

On May 23, a 10-story building collapsed while under construction in the city of Abadan. Emergency responders are still sifting through the rubble, but as of Wednesday the confirmed death toll was reported as 37 and was expected to continue climbing. The incident sparked numerous protests, many of which emphasized the role of the regime’s corruption and the building owners’ disregard for safety protocols and prior warnings.

“Months ago, reports of the building’s main column sinking, and the ceilings of various floors sagging were evident. But the [Abadan] municipality’s failure to follow up on construction violations led to Monday’s tragedy,” the state-run Khabaronline website acknowledged on May 24.

The anti-regime protests continued this week in spite of the widespread presence of suppressive forces and efforts by regime authorities to disrupt internet communications and thus impede both organizing and the spread of news regarding the public’s outrage.

Emerging reports describe protesters pointing to the Abadan collapse as a sign of much wider corruption.  In an interview aired on Iran’s state TV on Friday, May 27, Kamran Abdoli, Deputy Fire Protection and Security of the Fire Department, revealed troubling information about the current state of many Iranian buildings. “We have already identified 33,000 buildings in Tehran, primarily old buildings. There are 947 towers among these buildings, with up to 12 floors. Unfortunately, we have often said that we have 129 buildings in critical condition, which require immediate attention,” he told IRIB News.

The collapse of the Metropol Complex perfectly lays bare the regime’s conduct and its decades of corruption. That is why the Iranian people have poured into the streets to call for democratic change, chanting “Death to Khamenei,” the regime’s Supreme Leader.