On May 23, the ten-story Metropol Complex in Abadan, southwest Iran, collapsed. Dozens were killed, and many more are believed to be still under the debris. The tragic event brought the critical state of many Iranian towers and buildings to light.

The twin tower of Metropol is located in a busy area in downtown Abadan. The first tower has crumbled on the surrounding buildings, and according to experts, there is a high risk of the second tower falling as well.

This is not the first time that a building suddenly collapsed in Iran. On January 19, 2017, the famous Plasco building in Tehran crumpled, merely hours after it had caught fire.

Constructed in 1969, Plasco was considered an iconic landmark of the Tehran skyline. Nearly 20 Iranian firefighters died while trying to help people, and many more were injured.

In an interview aired on Iran’s state TV on Friday, May 27, Kamran Abdoli, Deputy Fire Protection and Security of the Fire Department, revealed some damning information about the current state of many Iranian buildings.

“We have already identified 33,000 buildings in Tehran, primarily old buildings. There are 947 towers among these buildings, with up to 12 floors. Unfortunately, we have often said that we have 129 buildings in critical condition, which require immediate attention,” he told IRIB News.

When the host asked Abdoli whether they surrendered the report to the Judiciary, he reluctantly acknowledged that his department had given numerous reports to state officials, mainly the Judiciary, but to no avail.

Abdoli also admitted that hundreds of hospitals in Tehran are in a similar condition to Plasco and Metropol.

“Have you reported this to authorities?” the host asked.
“We have tried, but some people prevented us from following up on this issue.” Abdoli acknowledged, adding that the “Judiciary officials prevented us from acting after the Plasco incident.”

The next guest was Mohammad Jafar Montazeri, the regime’s prosecutor general. Montazeri tried to dodge questions about the Judiciary’s role in preventing the reports of damaged buildings to be published or being followed up. He blatantly undermined the credibility of reports.

He claimed, that “the Judiciary is not responsible for everything” while laying the blame on other regime officials and institutions, saying “the relevant officials should zealously fulfill their duties.” Montazeri blatantly called the tragedy an “opportunity.”

“What you call an opportunity, the people in Abadan consider it a threat and tragedy,” the state TV host interrupted. The conversation on Iran’s live TV, known for spreading lies, reflected the current volatile state in Iran’s society, mainly in Abadan. The ongoing protests in Abadan and other cities and the ever-changing sentiments by state officials are testaments to this fact.

But what the state TV deliberately ignored was the regime’s role in tragedies such as the one in Metropol and Plasco.

The facts on the ground make the regime’s ominous role in these “preventable” tragedies very clear. Plasco was once considered one of Tehran’s “most durable” buildings. Following the 1979 revolution, the regime confiscated this building, along with other public properties. The infamous Mostazafan Foundation (the foundation of the underprivileged), overseen by the regime’s Supreme Leader Ali Khamenei, officially owned Plasco. The organization, known for its role in plundering and confiscating the wealth of dissidents and independently wealthy people, had refused to renovate and strengthen the foundations of Plasco, as it needed every penny to fund the regime’s illicit activities.

The government of Hassan Rouhani published a report amid the regime’s infightings, revealing that the Mostazafan Foundation had ignored warnings given by local authorities. The report also revealed that government ministries had failed to enforce 22 national building regulations.

Following the collapse of the #Abadan Metropolitan Complex in the southern #Khuzestan province, the state-run Mostaqhel online published the video of a local journalist who was warning about the miserable state of the building. https://t.co/Ggw5tSsYOy pic.twitter.com/Xqcso6BkwC

The fingerprints of Iran’s ruling theocracy and its institutions are visible in the Metropol tragedy. Following last week’s heart-wrenching incident, Iran’s state media acknowledged that a year ago, experts had warned of the possibility of the building’s collapse due to weak structures, but officials and the owner ignored the warnings.

“Months ago, reports of the building’s main column sinking, and the ceilings of various floors sagging were evident. But the [Abadan] municipality’s failure to follow up on construction violations led to Monday’s tragedy,” the state-run Khabaronline website acknowledged on May 24.

With close ties to senior IRGC commanders and other local officials, the owner of Metropol, Hossein Abdolbaghi, ignored many warnings by experts and called them hallucinations. “The formula behind Abdolbaghi becoming rich is smart management and building relationships [with regime entities], privileged opportunities, and forming ties with political and administrative figures,” the state-run Fidous website acknowledged on August 3, 2020. 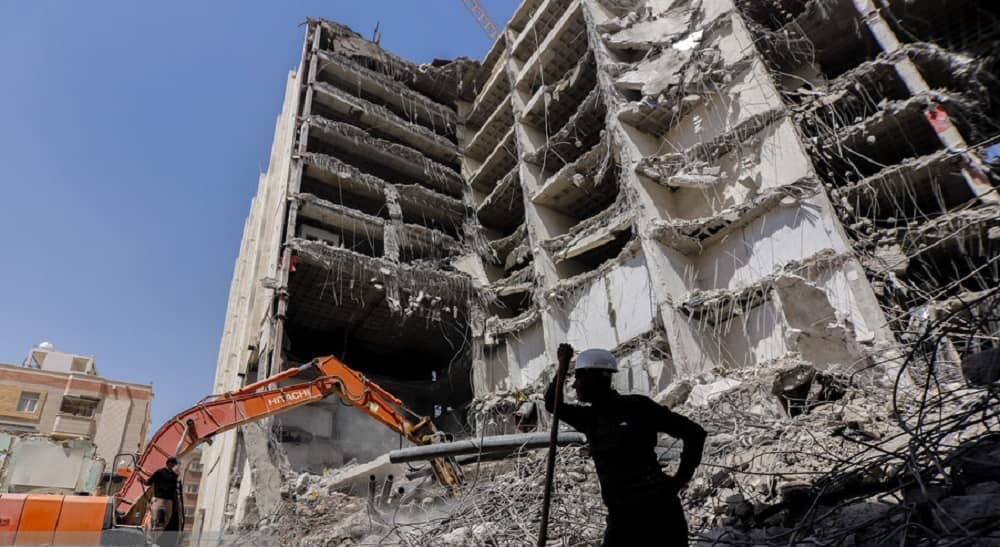 Abdolbaghi was in close contact with the Revolutionary Guards (IRGC) Khatam-al-Anbiya base, which monopolizes Iran’s construction industry. Abdolbaghi and his construction holding built dozens of low-quality buildings in southwest Iran while plundering billions with the backing of IRGC. Before Monday’s tragedy, Abdolbaghi was writing a book, “How I turned the ruins of Abadan and Khorramshahr into my wealth.”

Following the tragedy, state officials have made contradictory remarks about Abdolbaghi’s fate. They first claimed he had been arrested. Then the state TV staged a show, showing a disfigured victim and claimed it belonged to Abdolbaghi, while presenting his intact ID cards, supposedly found “under the ruins of Metropol!”

There are many speculations about his whereabouts, but the regime’s ridiculous theatrics reveal the mullahs’ fear of whether he is alive or dead. Rumors and reports alike have spread on social media about him being sighted in Canada or the UAE.

The collapse of the Metropol Complex perfectly lays bare the regime’s conduct and its decades of corruption, squandering national resources and ignoring people’s lives. Since taking power in 1979, Iran’s ruling theocracy has brought Iranians nothing but misery and misfortune.

Recently, state officials have been shedding crocodile tears for the victims and their families. Meanwhile, security forces have been dispatched to Abadan, and videos from several Iranian cities show them opening fire on mourners and peaceful protesters.

The Iranian people know their enemy. Therefore, instead of calling for justice or trying to sue Abdolbaghi and his company, they have been taking to the streets, chanting: “Death to Khamenei, Raisi” and “Our enemy is right here. They lie when saying it’s America.”