The Message of Intensifying Protests in Iran Ahead of Sham Elections

Written by Mansoureh Galestan
18th May 2021 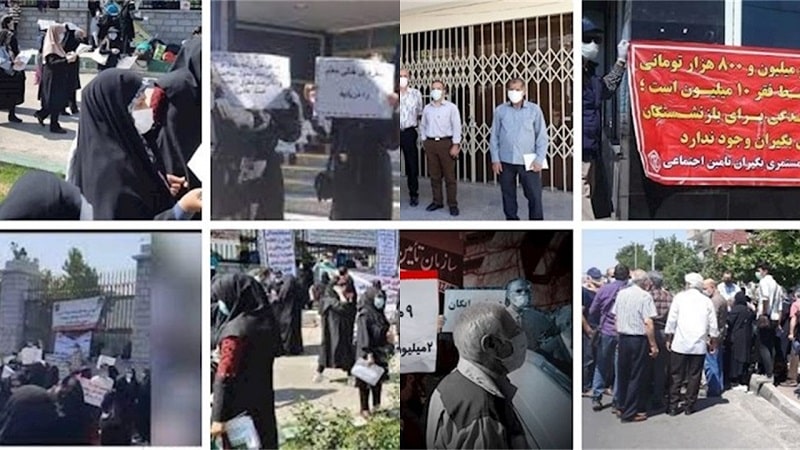 Dozen Iranian cities on Sunday witnessed pensioners, retirees, and teachers of the literacy movement, holding protests and rallies, protesting their dire living conditions, which is the result of the regime’s corruption and warmongering policies.

Teachers and retirees called for the boycott of the regime’s sham presidential elections while protesting the regime’s corruption and malign policies, which have devastated people’s lives. Protesters chanted: “We will not vote anymore; we have heard too many lies,” “We will not rest until we get our rights,” “We will not leave until we reach our demands.”

Protests in Iran spread and intensify while the regime is engulfed with a domestic and international crisis. As the regime’s Supreme Leader Ali Khamenei said, the ruling theocracy is about to hold its “most sensitive elections.” Contrary to Khameie’s demand, the regime’s farce elections have become bipolar, and the regime’s factional feuds have increased.

In other words, the regime is in a critical situation. Thus, officials and state-run media warn each other of people’s uprising. “Economic problems, inflation, and the fear of death and disease have drastically reduced people’s patience. People commute in the city like moving powder kegs that could explode at any moment,” Arman daily warned on Sunday.

“lack of a positive economic outlook, weak foreign policy, belligerence, regional adventurism, lack of transparency with the people, lack of central bank independence, currency repression, and people’s mistrust, are important causes of the curse of inflation in different governments,” wrote the state-run Ebtekar daily on Sunday.

“People’s livelihood is turning to a major economic and social catastrophe,” wrote the state-run Mardom Salarie daily on Sunday.

Sadegh Ziba Kalam, one of the regime’s apologists, underlined the regime’s increasing infighting and that candidates have no solution for people’s problems. “Why are people disappointed? Why are the youth frustrated? Why is there unemployment? Why is there economic insecurity? Candidates act as they were not chief executives, mayors, governors, judiciary chief or not the parliament’s speaker,” Ziba Kalam acknowledged on Sunday.

“Iranian people’s economic misery is a very deep well, and candidates are only digging it deeper,” wrote the state-run Jahan-e Sanat.

In such a situation, Khamenei and his regime face increasing protests from all walks of life. Khamenei and his regime should brutally oppress these protests, which will quickly result in a furious uprising. Or the regime should wait and avoid oppressing protests, which will intensify protests and ultimately results in another uprising.