Strikes and Protests Throughout Iran on Tuesday

More and more socio-political movements rise to the occasion and make their voices heard throughout the country. In some cases, the regime’s officials have increasingly become frightened of getting things out of control and asked for security forces to engage. The city of Kerman in the Southwest of the country is one such example.

May 17 – Kerman, SE #Iran
Workers of the Manujan mine took to the streets outside the Governor's Office to protest the incompetence of city officials. #IranProtests pic.twitter.com/ja9AlBE0QE

Other cities have been anything close to silent. In Tehran alone, there have been several rallies and protests on Tuesday from students, bus drivers, literacy movement teachers, unemployed teachers, college-graduated teachers, employees of the Crypto-Land company, employees of Iran Air aviation company, creditors of the Municipality’s Housing Cooperative in the Golestan district, and Health Ministry volunteers. 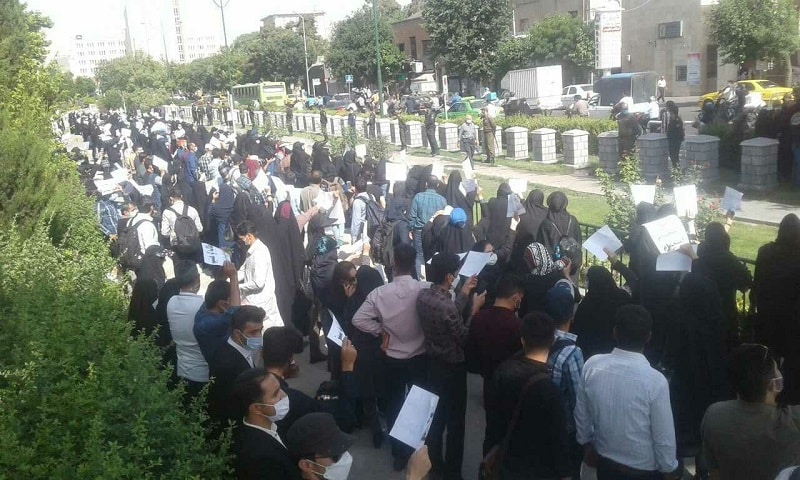 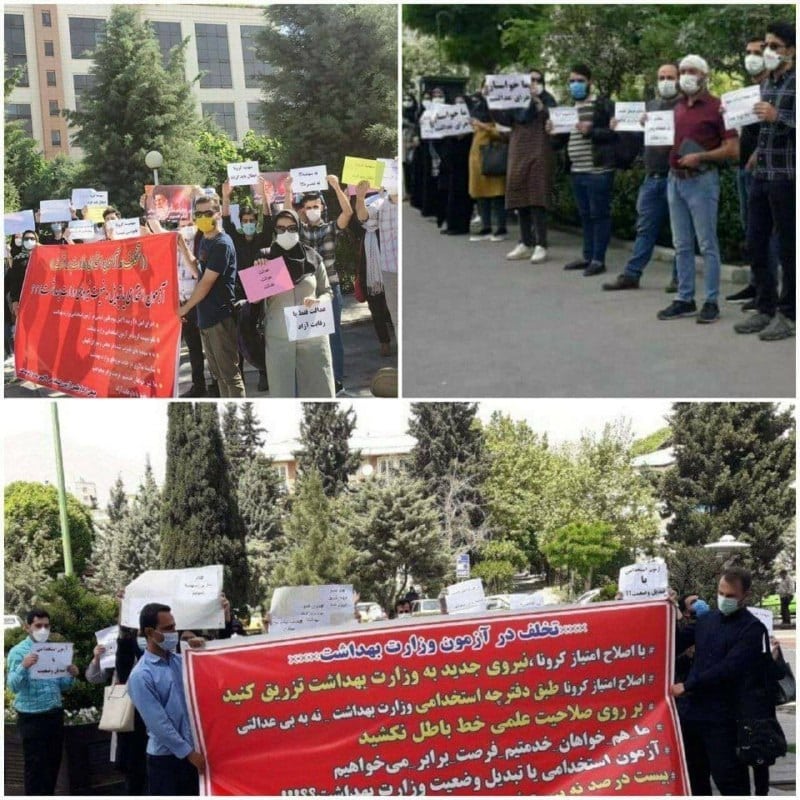 May 18 – Tehran, #Iran
Unemployed teachers from across the country gathered again outside the Parliament to demand jobs.
"Cry out for your rights!" they chant. #IranProtests pic.twitter.com/jUwH3Nt6NA

Also on Tuesday, reports from other cities displayed the people’s frustration with their living and work conditions. Pipe factory workers in Ahvaz, cement factory workers in Sabzevar, retired employees of the Steel & Mine Industry in Isfahan, miners of Anjar Copper Mine in Ahar, as well as students in Qazvin, Shahrekord, and Tabriz joined their fellow countrymen and women to protest against the inhuman policies of the Iranian regime and its local substitutes.

#IranProtests
Isfahan—retirees of the Steel & Mine Industry rallied in front of the retirees' fund protesting officials' failure to meet their demands.
In recent weeks, they staged several rallies pursuing their inherent rights but only won officials' indifference and inaction. pic.twitter.com/IxrIFP5Dqx

Officials in Iran refused students' protests against in-person exams putting their lives at risk in crowded and contaminated schools with #coronavirus.
Footage of the cities of Tehran, Qazvin, Shahrekord, Mashhad, and Tabriz. pic.twitter.com/uJroJ5A2Kr

The Iranian regime will hold its sham presidential election on June 18. As the date draws closer, more Iranians join the campaign for boycotting the farce elections. Recently, a video from Iran shows several mothers of the martyrs of the November 2019 uprising bravely call for the boycott of the regime’s sham Presidential election. These brave mothers call for regime change and announce that their vote is the overthrow of the regime by the Iranian people.

I salute the brave mothers of the martyrs of the November 2019 uprising. They safeguard their children’s sacrifice by calling for the clerical regime’s overthrow and boycotting the mullahs’ sham election. #IranProtests 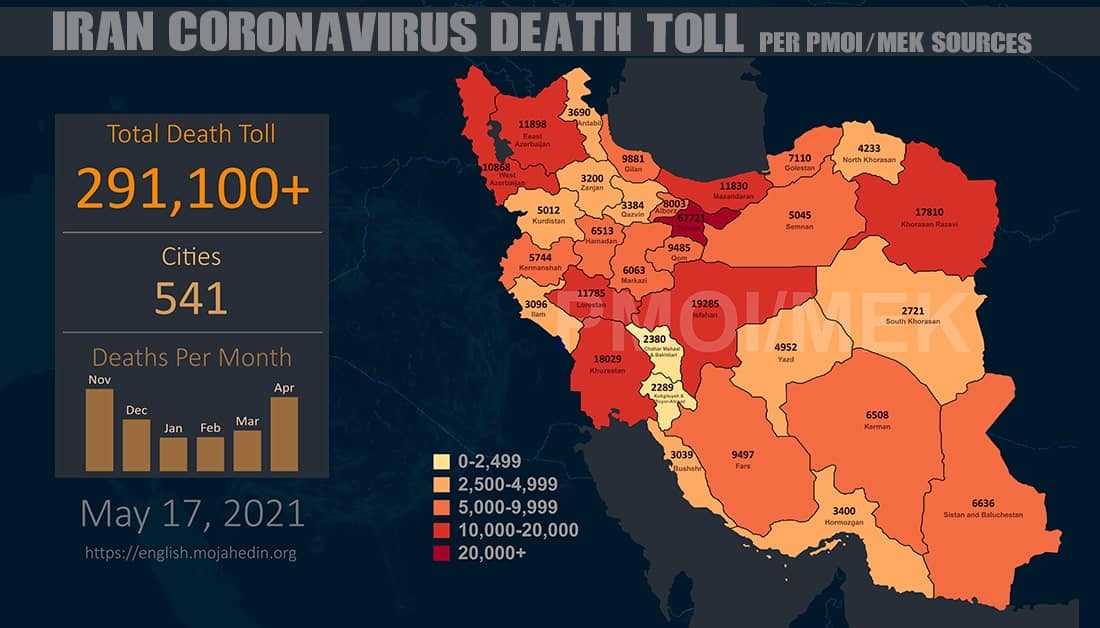 More than 291,100 people have died of the novel #coronavirus in 541 cities checkered across all of Iran's 31 provinces, according to the Iranian opposition PMOI/MEK. 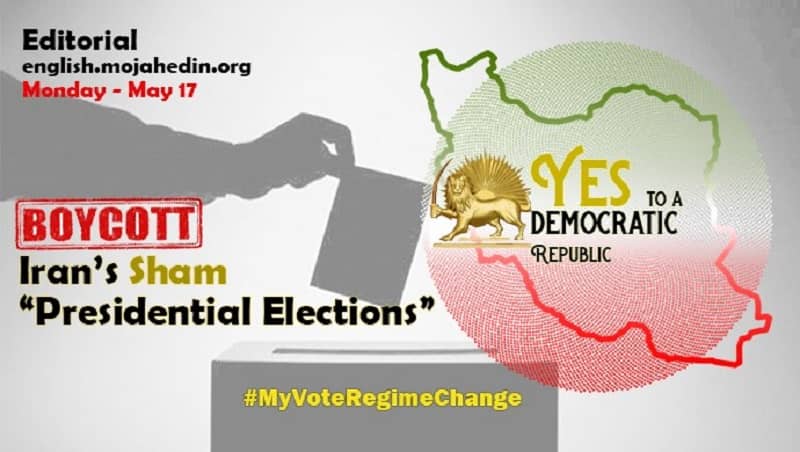 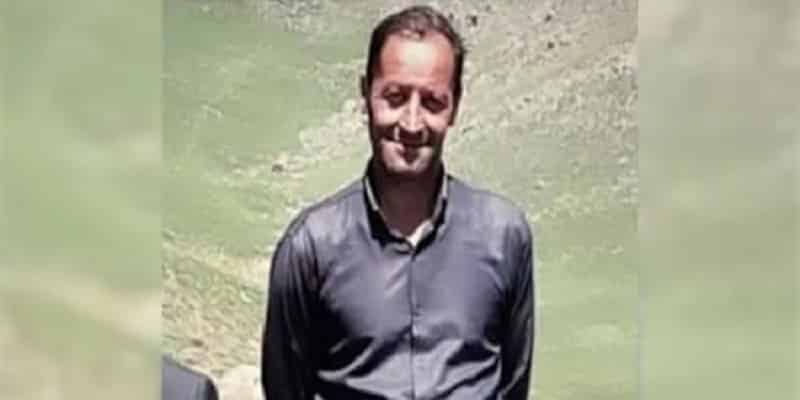 A border porter or “kolbar” was killed yesterday by the Islamic Revolutionary Guard Corps (IRGC) in Salmas, northwestern Iran. According to the Hengaw Organization, the man was identified as 46-year-old Zabet Alkhani. Zabet was married and was a father of three children. The report said the IRGC started shooting without warning at the border porters who were crossing the border, killed Zabet.

The state attorney of Shar-e-Rey, neighboring the Iranian capital, announced on Monday that 3 officers who have been beating street vendors are now arrested. This comes amid public protests and increasing calls for investigation after a video recording of the latest case of such mistreatment went viral.

May 13 – Shahr-e-Rey, Tehran #Iran
Municipal agents brutally beat a street vendor who was unable to pay them their weekly bribe.
Officials claimed the agents were arrested because the video caused a national outcry. But this is not an isolated case. pic.twitter.com/20s73SIWkn 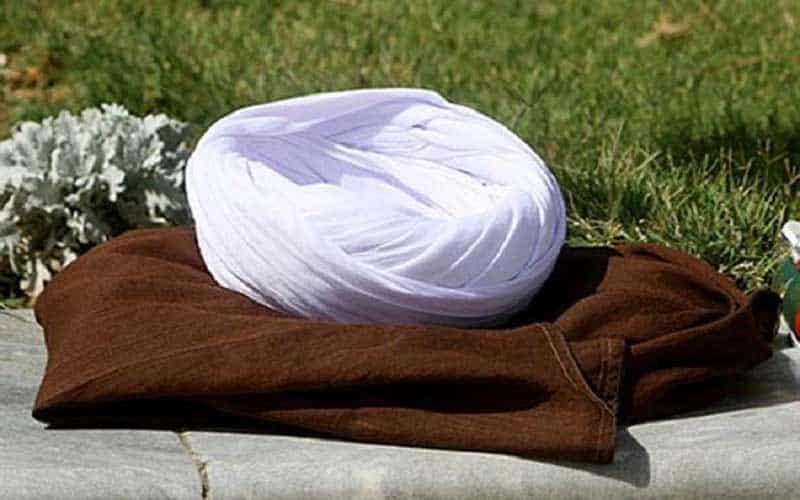 There are many figures among Iranian politicians who used to wear clerical garb. However, they took off clerical clothes and wore suits pending their positions. Gholamhossein Karbaschi, the former Tehran Mayor and the current secretary-general of Executives of Construction Party, is one of the most famous officials in this context. Following the 1979 Revolution in Iran, Khomeini identified Karbaschi as Hujjat al-Islam [a mid-level religious title], appointing him as his representative in the Gendarmerie Office. Thereafter, Karbaschi never wore clerical clothes.